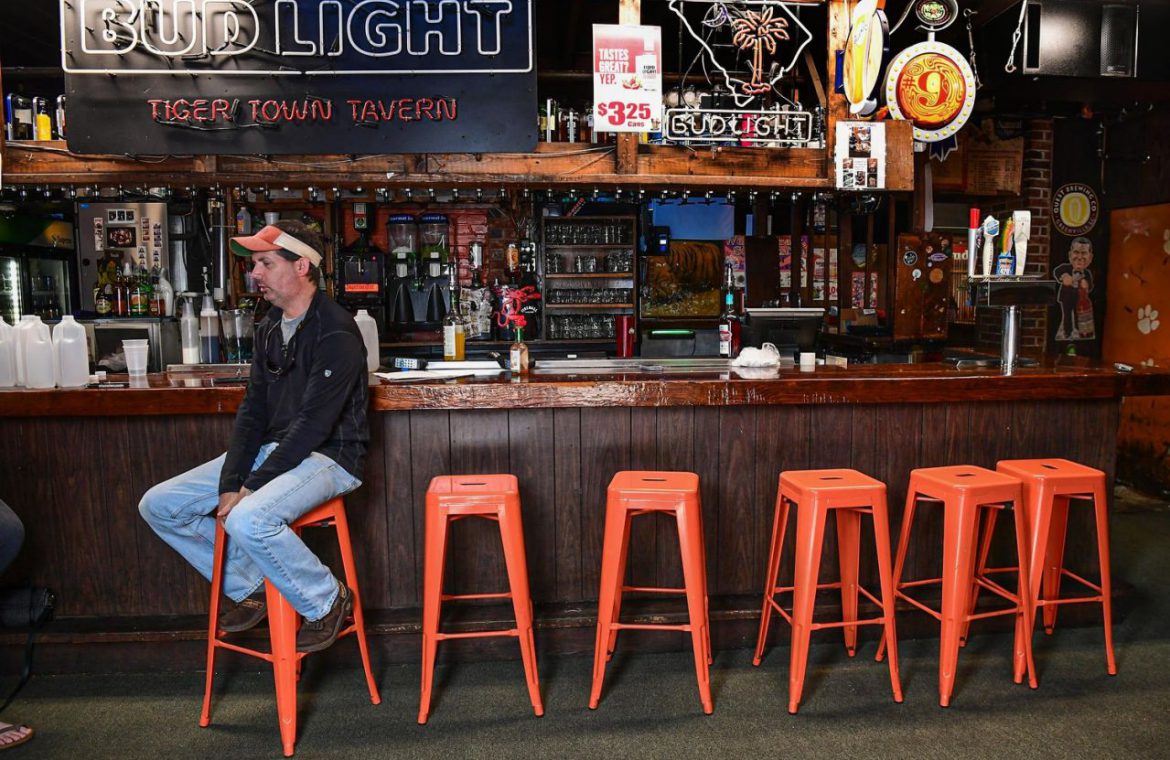 When Clemson University students turn 21, they celebrate at Tiger Town Tavern by buying one of the downtown bar’s iconic “I’m Legal!” T-shirts.

On fall game days, football fans and alumni pack around the pool tables and onto the outdoor patio, leaving a line of people out the door. And on just about every other day, regulars have a Tiger orange barstool where they sit every time they come in for beer and bar food.

But for two months, Tiger Town Tavern sat empty — after being in continual operation since 1977, right up until South Carolina Gov. Henry McMaster’s executive order closed dining rooms on March 13 in response to the coronavirus pandemic.

The bar reopened its outdoor patio for customers after the governor eased restrictions on May 4. It was allowed to reopen for indoor dining on May 11, but can only operate at 50% capacity, according to McMaster’s emergency order.

“It’s a real bummer, but you know it’s for the greater good, because I can tell you right now … social distancing in a bar is impossible,” part-owner Cameron Farish said as he sat on one of those orange barstools, arms crossed and shoulders hunched.

Cameron Farish, co-owner of Tiger Town Tavern in Clemson, S.C., mourns the loss of business from Clemson University during the coronavirus pandemic.

As states take steps to reopen businesses and restart the economy, merchants in college towns are only now entering their traditional slow period, even as they look ahead to a fall forecast clouded with uncertainty. With uncertainty around colleges’ plans to reopen, experts warn they might face a prolonged slump that could mean “total devastation.”

Will students show up for college in fall? Community colleges offer a hint. It isn’t pretty.

Before the closures, no one could have imagined that for Clemson’s 50-year-old downtown district. The football team’s run of championship contenders and a 30% rise in enrollment since 2010 propelled a surge on College Avenue after the 2008 economic recession and road construction that discouraged traffic through the area.

Now, the open parking spaces and empty sidewalks make it all too easy for business owners like Farish to imagine their towns in the absence — or at least a partial one — of the universities that are the lifeblood of the local economy.

“If there was not a Clemson University … this would be a cow farm,” Farish said, waving to the walls covered in beer and football posters in his bar. “I mean, there was nothing here until the university was here.”

Cameron Farish, co-owner of Tiger Town Tavern in Clemson, shows a T-shirt he made to sell graduates through the Tiger Town Graphics website, since Clemson University’s campus is closed from the COVID-19 pandemic.College towns: The new ‘company town’

Over the past 50 years, American universities have become economic goliaths, said Alan Mallach, a senior fellow at the Center for Community Progress, who studies urban planning and growth.

It was over those five decades that universities really started to grow, fueled by major research funding and graduate programs, he said. “But for a long time, it was kind of quiet, not an important economic factor.”

As universities grew, towns became increasingly reliant on them for employment and business. New Haven, Connecticut, for example, was an industrial town in the 1950s with a university in the middle of it. Today, Yale University is the primary employer and economic driver in New Haven after the manufacturing industry has all but disappeared.

College towns, Mallach said, “are extraordinarily dependent on the health of the university as a generator of the city’s economic health.”

Cities with high-level, four-year universities see an extra $265,000 a year economic boost for every student enrolled at the school, according to a 2015 study from the Brookings Institute. The result is a thriving but small, business-rich local economy with a highly educated and wealthy population. In Clemson, for example, the average home price is about $100,000 more than the surrounding county.

“College towns, not surprisingly, always stand out as these kinds of places that are doing far better than you would expect, because they have this secure employer there,” said Jennifer Mapes, a researcher at Kent State University who studies the economic impact of higher education on local economies.

In places like South Bend, Indiana, the nearby University of Notre Dame helps indirectly employ 7,700 people in the hospitality industry. Hotels and thousands of short-term rentals like Airbnbs are just one part of the $2.65 billion in annual economic impact in the region tied to Notre Dame.

“It’s our busiest weekend of the year,” said Kurt Janowsky, the owner of Navarre Hospitality Group. “Commencement is a four-day extravaganza. Our restaurants and catering are incredibly busy, so losing it is like a body blow to South Bend.”

A blow to students, too: Coronavirus stole our 2020 college graduation. We made our own.

But that tethered success in boom times can mean tethered failure when times turn bad.

Since Notre Dame’s commencement is being held virtually, Janowsky estimated that he already has lost about $3.5 million in revenue at his four restaurants and his catering operations because of the coronavirus pandemic.

Even as universities across the country wrestle with the dilemma of how to reopen classrooms, they face deep concerns over the prospect of enrollment declines. On top of that, state budgets are strained, forcing some schools to look to furloughs or layoffs to stop the economic hemorrhaging wrought by the virus.

At the University of Wisconsin, most of its 3,500 employees will be furloughed six to eight days over the next five months. The University of Tennessee paid out $15 million in refunds to students. Clemson University told its board of trustees it could lose up to $100 million if classes are held online in the fall.

Students are weary of online classes: But colleges can’t say whether they’ll open in fall 2020

As losses mount and enrollment projections remain unclear, Mapes said the long-term impact on universities could change the fabric of higher education and the communities they are in.

“You’re gonna see this decline in enrollment, which everybody is expecting,” the Kent State researcher added. “You also have potential staff cuts and faculty cuts that are going to reduce people who are living locally.”

Mapes likened college towns’ dependency on their universities to the Rust Belt cities who once relied on automotive manufacturers. “If a General Motors plant employs thousands of people and then it shuts down, that’s it for that town. That’s total devastation.”

Public, four-year universities — already bracing for reduced enrollment over the next decade due to a decreasing college-aged population — have become increasingly reliant on out-of-state and international students to make up for a decline in state support, Mallach said.

“This was not a really great business model to begin with,” Mallach added. “Now, obviously, while the university is closed, it’s a disaster for the storekeepers.”

The board of regents at the University of Georgia approved sweeping furloughs that will cut higher-paid employees’ salaries by 10% and the overall budget by about 14%, according to Athens Online. Hundreds of professors, researchers and administrative staff will have less pay in their pockets, reducing their ability to spend at local shops and restaurants.

And even if universities can resume in-person classes in the fall, Mallach said expectations that local economies will be humming again by January are “profoundly unrealistic,” especially in college towns.

“(Recovery) will be potentially even slower than in other parts of the state or the country that have more diversified economies,” Mallach said.

The cancellation of summer camps, graduations and orientations means Clemson business owners have to “tread water until August,” while the nearby city of Greenville can get back up and running in a few weeks, said Jason Beaty, who owns a framing shop in Clemson.

Meanwhile, the city of Clemson anticipates a 75% decline in hotel revenue next month, compared with last June, meaning a hit to tax revenue intended for the city’s parks and recreation programs, local chamber of commerce officials noted.

Looking even farther ahead, Mallach said all the unknowns about the virus and how it will affect university enrollment, athletics and employment could mean years before business gets back to pre-virus levels.

“If we look at it down the road in three years, with a lot of big ‘ifs,’ things could basically be back to something pretty much resembling normal,” he said. “It could be a very rough two, three years.”

But Farish, who’s owned and operated Tiger Town Tavern in Clemson since the late ‘90s, said downtown will weather this storm like it has the others before it.

“I remember the bad times with Clemson sports, where we weren’t doing that great,” he said. “And the lean years during the recession … and then this happens.

“But we’ll come back from it.”

Don't Miss it Coronavirus update: Italy set to reopen border, fears Wuhan testing site may spread virus
Up Next What does coronavirus unemployment mean for the future of work in the US? | DW News