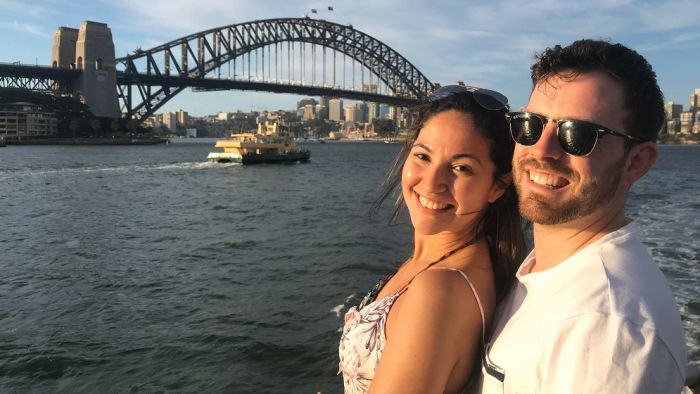 Hundreds of skilled migrants who have been living in Australia for years have been separated from their jobs, homes and even family members by the Australian Government’s international travel bans.

Key points:Separated families say they’re desperate to be reunitedSome skilled visa holders fear they’ll never get back to homes, jobs and partners in AustraliaThe Federal Government says the rules are there to protect the “Australian community”

Temporary visa holders who happened to be on overseas trips when the border closures came into force in March have been blocked from returning to their lives in Australia.

One Perth family has tried several times to secure a special travel exemption for their 16-year-old son, who they have been separated from for months.

The Fletcher family moved to Australia from the United Kingdom on sponsored work visas but their eldest son Taylor, 16, stayed behind to finish school exams.

Now, the Government will not let him join his parents as planned.

Despite four requests for leave to travel on compassionate grounds being lodged, the Federal Government has refused their son permission to fly to Australia to be with them.

Taylor’s mother, Chloe Fletcher, said she had also written to Foreign Minister Marise Payne and WA Premier Mark McGowan, but still had no idea when she would see her son again.

“For any mother to be away from her child for that long — the pain’s unbearable,” Ms Fletcher said.

The lack of clear criteria for what counts as “compassionate” or “compelling” circumstances has frustrated torn families.

“I don’t understand what the actual boundaries are, what makes a compassionate case,” Ms Fletcher said.

“There are no actual rules or regulations, so we don’t know what category we fit into.”

Under Australia’s coronavirus restrictions on international travel, only citizens and permanent residents are allowed to return from overseas.

That meant many skilled work visa holders outside the country were instantly separated from long-term jobs, homes, partners and pets in Australia.

‘It broke me’ Holly Haskell (right) has been unable to return to Australia after rushing to identify her mother, who died in a car crash in England just before travel bans came into place.(Supplied: Holly Haskell)

Holly Haskell rushed to England after her mother died in a car crash in March.

She went through the trauma of identifying her mother’s body, dealing with police investigations and organising the funeral.

As if that was not hard enough, the Australian Government’s travel ban came in just days after the funeral, meaning she cannot get back to her home, job and friends in Melbourne.

She is still working for her Australian employer, doing her shifts in the middle of the night so she can operate in sync with Australian time zones.

Ms Haskell applied for and failed the Government’s compassion test for return travel to Australia.

“When I got the declined result, it broke me,” she said.

“Apart from work I didn’t leave my bed for days.

Some temporary visa holders have been paying rent in two countries so they can hold on to their Australian residences, while others have been forced to up-end their homes from afar.

Alexandra Skiba is stuck in California and cannot return to Australia, despite her Sydney employer writing to the Government asking for her to be allowed to return.(Supplied: Alexandra Skiba)

Travel industry worker Alexandra Skiba has lived in Sydney for two years but was visiting family in California when she learned she would not be allowed back in.

“My friends are going into my apartment to pack it up for me,” Ms Skiba said.

“My boyfriend is in Sydney and I don’t know when I’ll see him again.

“It’s heartbreaking to have a skilled visa and not even be considered as someone worthy of bringing back home. It’s cruel.”

Acting Immigration Minister Alan Tudge said exemptions could be made in special circumstances, but the rules were clear.

Stay up-to-date on the coronavirus outbreak Perth man Paul Walker must seek permission to leave Australia to be with his girlfriend for the birth of their baby in June.(ABC News: Hugh Sando)Pregnant couple separated

The Department of Home Affairs said compassionate exemptions “must be balanced against the Government’s intent for imposing the travel ban and the health risks posed to the Australian community”.

But the strict Australian travel restrictions have split up families in both directions.

Temporary skilled visa holder Paul Walker is in Perth while his pregnant girlfriend is stranded in the UK.(Supplied: Paul Walker)

Paul Walker is a UK citizen and an Australian permanent resident.

His girlfriend, Anna Smith, is pregnant with their first child and stuck in the UK.

Before the borders closed, she planned to return to Australia in time to have the baby.

With a June due date, it is now too late for her to travel.

All Australian citizens and permanent residents must seek Government permission to leave Australia, and Mr Walker cannot get it.

Mr Walker has been desperately trying to get to the UK in time for the birth, but multiple applications for permission to leave Australia have been rejected by the Department of Home Affairs.

“What kind of father doesn’t want to be there for the birth of his child?”

Her Sydney-based boyfriend called her at 2:00am when he heard Australia was closing its borders, but the 27-hour flight from Brazil made it impossible for her to get back to the country in time.

“My whole world collapsed,” she said.

She has been living in her nephew’s bedroom in Sao Paulo ever since and has just had her seventh request for permission to travel back to Australia denied.

Ms Carvalho’s student visa is due to expire in October and she is worried she may not be able to return to Australia again.

The Department of Home Affairs reported it had received more than 1,300 applications for special exemption for non-citizens or residents to travel to Australia and has approved 73 per cent of the requests.

Don't Miss it Barack Obama attacks Trump administration’s response to coronavirus pandemic | US news
Up Next Russia is battling coronavirus across 11 time zones. But Moscow and the regions are worlds apart