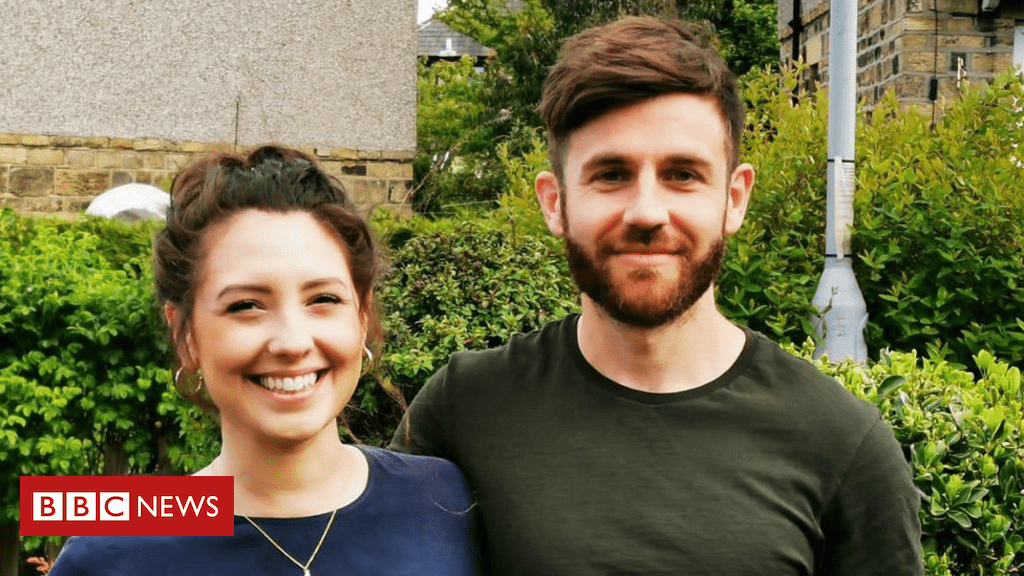 The coronavirus outbreak may have scuppered many wedding plans, but plenty of couples are still getting engaged. For many, lockdown has been both a bonding experience and a chance to get creative with proposals.

James French, 33, had originally planned a blockbuster marriage proposal. He was going to pop the question to his partner of six years, Becky Firth, during the holiday of a lifetime to Japan. He pictured it happening amongst the blossom.

Coronavirus put a stop to that. The holiday was cancelled.

However, the couple managed in March to complete their planned move from London back to the north of England where they had both grown up. They had planned to stay with their parents in Saltaire, near Bradford, while they looked for a new home. But since both sets of parents are vulnerable, the couple had to move in with friends instead.

James, a product consultant for a technology firm, decided to improvise his proposal plans in these far from ideal circumstances.

“I set up a treasure hunt in the village where she grew up with riddles and poems in meaningful places,” he explains.

Since he did it on her 30th birthday, she didn’t necessarily suspect what was to come. The final clue led to a spot on the moors, where he asked the big question. She said yes.

The tricky thing from a practical point of view was the ring, explains James.

He wasn’t sure he wanted to buy an expensive diamond one online and have it arrive by post, but of course he couldn’t go to a shop because of lockdown.

In the end, he decided to buy a ring online that he would use just for the proposal. He knew it still had to look good, and similar to the real one he would eventually get so that they could show if off in engagement photos, he says.

The couple plan to wait until 2022 to get married, because they know there will be huge pressure to hold postponed weddings next year.

This is something we can celebrate now, and cherish, despite coronavirus, says James.

In Northamptonshire, Marilyn Coles, 24, and Roland Walet, 26, were also in lockdown.

They met on Tinder last year and have been living together for just over six months.

They hadn’t been thinking about marriage before, but coronavirus focused their minds.

“Lockdown is a stressful situation and it’s brought us closer together,” says Roland. “Spending more time together has bonded us, we can see every side of each other.”

It allowed Roland to get to know Marilyn’s son from a previous relationship properly, he adds.

“Suddenly I could see myself spending the rest of my life with Marilyn.”

Marilyn remembers the day of the proposal well.“The doorbell rings and he went a big giddy as he went down the stairs, bless him.”

“I suspected it was the ring at last,” explains Roland. He had got one customised online.

After a quick inspection to make sure it was what he expected inside the envelope, he braced himself and returned upstairs to propose in the bedroom.

The prospect of big ceremonies and occasions, says Marilyn, makes her feel anxious, so this was just the kind of proposal she wanted.

Roland is a Dutch national and the couple plan to marry next year in Amsterdam in an informal ceremony with friends.

He anticipated “a massive drop in demand” as a result of coronavirus, up to 80% of sales perhaps, he says.

In fact, so far his company has seen a sales drop of only around a quarter.

Normally he sells 60% of rings online and the rest in physical stores, but online sales have risen since lockdown, helping to stabilise the business.

“Many customers have told us that even though they can no longer travel to a special proposal location, they don’t want to wait and are proposing at home instead in very thoughtful and imaginative ways,” says Kormind.

“If someone feels the time is right to propose, then it’s right. The setting is only really window dressing. In times of crisis you get to know people a lot better, a lot quicker.

“With lockdown, it’s like you actually have the government pushing love,” he jokes.

“We thought our business would grind to a halt when coronavirus struck,” he says.

In fact new sign-ups to his service this April only dropped slightly compared with the previous year, by around 5%.

The feedback from customers is that despite unprecedented financial pressures, and the inability to hold wedding ceremonies, couples still want to get engaged, says Shephard.

He too puts it down to couples spending more time together.

Ones who are furloughed are getting the chance to share hobbies and learn about each other’s interests, outside of the usual grind of work, he says.

He predicts that 2021 and 2022 will be bumper years for the wedding business.

Media captionEmily and Daniel tell the story of their engagement

One of 77 Diamond’s recent customers is police officer Daniel Hughes-McConnell, 30. He originally had grand plans for a proposal in New York.

He was well aware that his long-term girlfriend, nurse Emily Hands, also 30, had dreamed of it happening next to the Rockefeller Plaza Christmas tree. She’d had the idea since watching the film Home Alone as a little girl.

He made the necessary arrangements, but the dream was quashed when travel firm Thomas Cook collapsed.

Daniel then planned to propose on a trip to Italy. When coronavirus forced him to cancel their travel plans again, he thought he was cursed.

Like James, he decided to adapt his plans to the new reality of lockdown, rather than delay.

He admits to being a little apprehensive about getting the ring in the post. It was sent first class and recorded delivery.

But he ended up getting in a panic because he forgot there was a bank holiday coming, which delayed its arrival by a day (Emily’s face winces in disbelief during our video call as he apparently shares this detail for the first time).

Daniel proposed on a beach near where the couple live in Prestatyn in North Wales, a place they used to take romantic walks together when they first starting going out.

He chose a spot to go down on one knee with extra significance for Emily – a bench commemorating her best friend from school, who died a few years ago.

Emily was touched by the gesture and is glad the couple didn’t postpone the engagement, waiting for a grander and more expensive proposal abroad.

“In fact, the cheaper proposal has been a blessing in disguise,” says Daniel.

“The money we saved by not going to New York or Rome, will be spent on our first baby, who we are expecting in November.”

If you have an inspiring personal story about being in lockdown, contact reporter Dougal Shaw