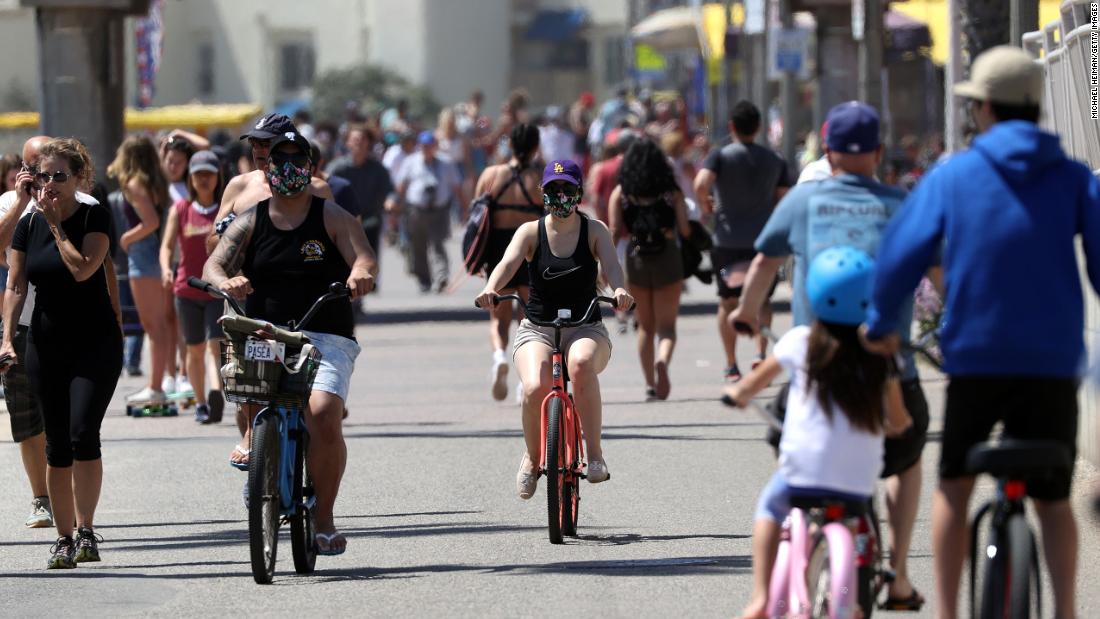 In California, more than 180 people may have been exposed by a person who had the virus during an in-person religious service last week, the Butte County Public Health Department said.

“We all need to do our part to follow the orders and mitigation efforts so that our Reopen Butte County plan can continue to move forward,” Butte County Public Health Director Danette York said in a statement Friday. “Moving too quickly through the reopening process can cause a major setback and could require us to revert back to more restrictive measures.”

And in Erie, Pennsylvania, officials said they will keep city park facilities closed to ensure a continued path toward the state’s reopening — despite repeated requests from residents to utilize park grounds for sports, runs and picnics.

“It is vital for the health of our community that we all refrain from gathering in large groups to ensure that our community members remain safe while we work towards moving into the Green Phase,” Mayor Joe Schember said in a statement. The green phase is the last of three reopening stages for Pennsylvania, during which most restrictions will be lifted and regions can proceed into a “new normal,” according to the governor’s office.

The warnings echo conversations taking place across the US by health officials, residents, business owners and experts who are trying to tackle what a safe reopening looks like — and what could happen if it’s rushed.

So far, more than 1,467,800 people have been infected with the virus and at least 88,754 have died, according to Johns Hopkins University.

Thousands of Americans have already spent weeks protesting against stay-at-home orders and measures that have kept their businesses and communities shut down — demanding it should be their right to choose the precautions they take.

In North Carolina, a federal judge granted churches the right to hold indoor services despite an order from the governor prohibiting services with more than 10 people, according to CNN affiliate WXII. The governor’s office had ordered earlier this month larger worship services were allowed as long as they were outdoors. In the complaint, the plaintiffs wrote the governor’s order “violates the Free Exercise Clause of the First Amendment,” according to the affiliate. In a statement, the governor’s office said that while they did not agree with the decision, they would not appeal and instead urged “houses of worship and their leaders to voluntarily follow public health guidance to keep their members safe.”

“We don’t want indoor meetings to become hotspots for the virus and our health experts continue to warn that large groups sitting together inside for long periods of time are much more likely to cause the spread of Covid-19,” the statement read.

Despite experts’ warnings and grim predictions of the country’s death toll if measures are lifted prematurely, beaches on both coasts of the country have also begun to welcome visitors again.

In Ocean City, New Jersey, a loudspeaker reminded sun lovers every 15 minutes this weekend to “practice social distancing while walking the boardwalk and beach.”

All New Jersey beaches will open next weekend for the Memorial Day holiday and Ocean City took a “dry run” to see how well people respect the social distancing rules.

In California, Los Angeles County was the latest to re-open its shores — with new rules.

The county requires visitors maintain at least 6 feet from each other and wear face coverings when they’re out of the water. Activities such as sunbathing, picnicking, biking and organized sports are still not allowed.

And while reported cases in the US continue to rise with more testing, the US Food and Drug Administration (FDA) also announced Saturday it authorized an “at-home sample collection kit that can then be sent to specific laboratories for Covid-19 diagnostic testing.”

The kit received an emergency use authorization, according to the agency, in order to be used by people who have already been screened using an online questionnaire that’s reviewed by a healthcare provider.

It will allow people to “self-collect a nasal sample at home” using the kit that has been authorized, the agency said.

“The authorization of a Covid-19 at-home collection kit that can be used with multiple tests at multiple labs not only provides increased patient access to tests, but also protects others from potential exposure,” Dr. Jeffrey Shuren, the director of the FDA’s Center for Devices and Radiological Health, said in a statement.