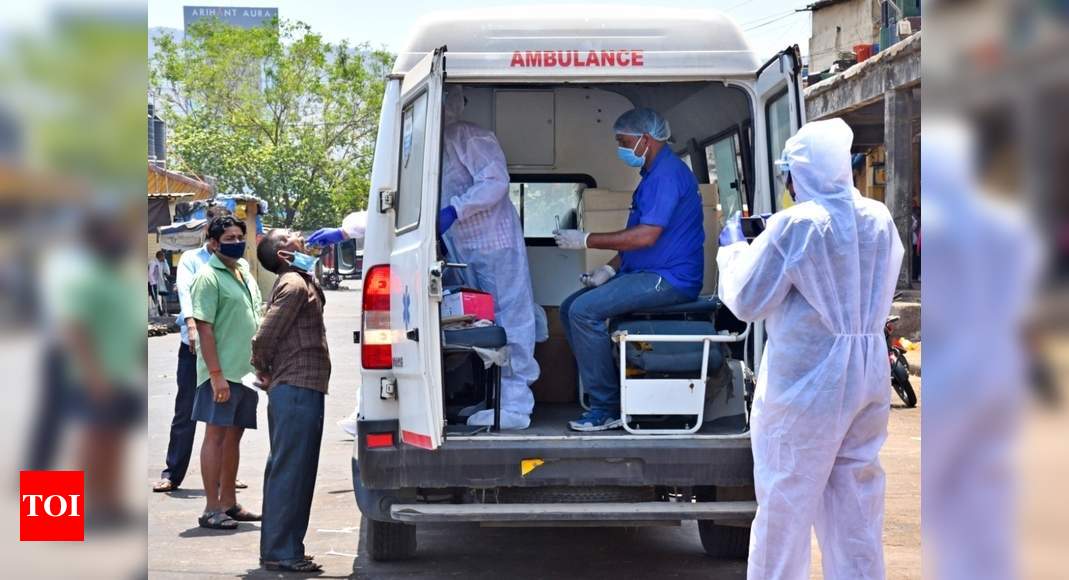 NEW DELHI: Covid-19 infections continued to surge in the country on the last day of lockdown 3.0, with the number of new cases topping 5,000 in a single day for the first time on Sunday on the back of another explosion of cases in Maharashtra, which reported a record 2,347 fresh infections.
As many as 154 deaths from the virus were reported on Sunday, the highest single-day toll so far if one discounts the 70-odd “back-dated” deaths added on May 5 which took that day’s total to 199. India’s overall Covid-19 death toll crossed the 3,000 mark and stood at 3,023 — a mortality rate of 3.2%.
Maharashtra reported 63 deaths, 38 of these in Mumbai alone, followed by 34 in Gujarat (31 in Ahmedabad) and 19 in Delhi, which has been facing flak for “under-reporting” Covid deaths.
While these numbers (cases and deaths) are based on data directly sourced from state governments, health ministry too showed a record single-day jump of around 5,000 cases on Sunday. The ministry, however, said the doubling time of coronavirus infection had improved to 13.6 days in the last three days from 11.5 in the past 14 days.
Health minister Harsh Vardhan said India had reached the 80,000 mark in 106 days while developed nations such as the UK, Italy, Spain, Germany and the US took 44-66 days to reach that mark.

Of the 2,347 new cases reported from Maharashtra — the first time over 2,000 cases were added in a day by any state — Mumbai alone accounted for 1,595. Of these, the state government said 590 Mumbai cases were from May 10 to 14.
The number of new cases remained high in Delhi (422) and Gujarat (391) while Tamil Nadu again saw a surge with 639 cases during the last 24-hours after recording numbers below 500 for the past two days.
Rajasthan and Uttar Pradesh had their highest single-day spike in cases, with 242 and 208 cases being reported, respectively. A senior UP health officer said, “About 70% of the cases reported in the state over the past two weeks are linked to returning migrants.”
As Tamil Nadu’s Covid-19 count continued to rise, touching 11,224 on Sunday, the health department sent a comprehensive testing policy to the government for approval. Four people died taking the toll to 78. Chennai, the most affected district, reported 482 cases to take its tally to 6,750.
The testing policy expected to be announced on Monday will advise district officials to continue testing all passengers from other states.
Meanwhile, with 11 new cases, Gurgaon’s Covid-19 tally went past 200. The district accounted for nearly half of all new cases (23) in Haryana on Sunday.
Bihar reported its eighth death due to Covid-19 and 106 fresh cases, including the highest 57 in Patna district in a single day. So far, 560 Bihar returnees have tested positive out of the state’s total tally of 1,284. Of these, 24% had returning from Delhi.
In 24 hours ending 5 pm on Sunday, Gujarat recorded 34 deaths, or one death every 42 minutes. The figure was second highest for the state after 49 deaths recorded on May 5. Total death toll in state due to Covid-19 is now 659.
With 31 deaths recorded in Ahmedabad alone, the district crossed 500 deaths mark with total toll of 524. The district is second in India in total death toll only after Mumbai which has recorded 696 deaths as on Sunday night.
In Karnataka, more than 38% of all Covid-19 positive cases have been recorded between May 10 and 17, with multiple daily records set in the past eight days.
Sixty-two people, including 14 policemen, tested positive for coronavirus in Jammu and Kashmir on Sunday, taking the total number of infected persons to 1,183 in the union territory, officials said.
Meanwhile, authorities in Andhra Pradesh heaved a sigh of relief after the state reported 25 Covid-19 cases on Sunday, the lowest one-day figure since April 16.