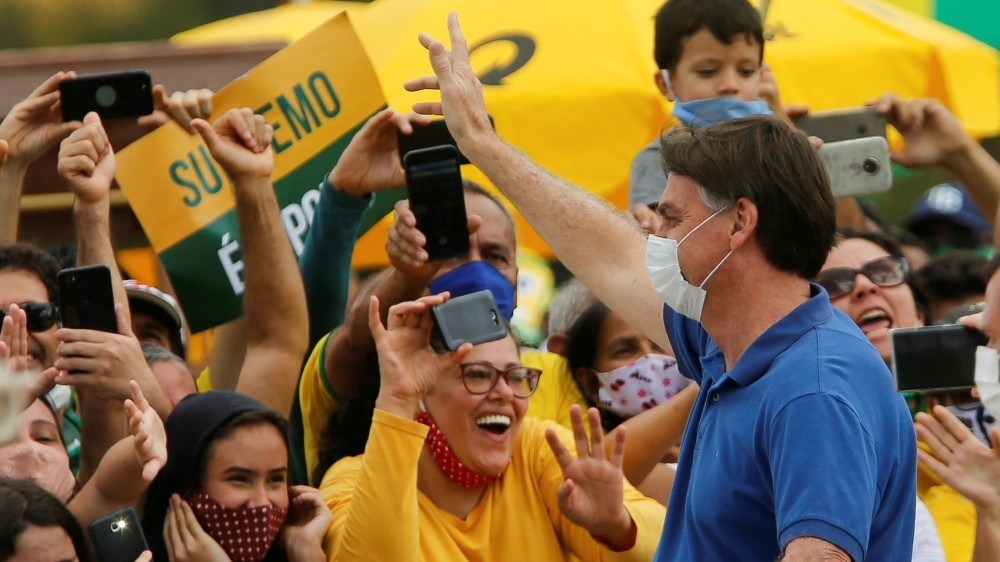 Brazil’s President Jair Bolsonaro continues to defy social-distancing rules, joining a demonstration outside his office on Sunday and posing for selfies with supporters even as health ministry data shows the country’s outbreak deepening.

Spain has reported a daily death toll below 100 for the first time in two months, while Italy’s was the lowest since the start of its lockdown.

US President Donald Trump hit back at his predecessor, Barack Obama, for being “grossly incompetent” after Obama criticised the Trump administration’s handling of the coronavirus pandemic. Obama told college graduates in an online address that the pandemic showed many officials “aren’t even pretending to be in charge”.

Globally, there have been more than 4.7 million known cases of COVID-19, and nearly 315,000 people have died, according to Johns Hopkins University. Just over 1.7 million people have recovered.

I’m now handing over the blog to my colleagues in Doha.

A quick recap of key developments this morning – Brazil’s right-wing president Jair Bolsonaro continues to defy rules on social distancing and quarantine even as the number of cases in his country surges; coronavirus has tipped Japan into its first recession in four-and-a-half years, pressure is building for an international probe into the pandemic as the World Health Assembly prepares to meet in a few hours time, and Australia’s leading economists are backing social distancing.

The coronavirus has tipped Japan’s economy into its first recession in four-and-a-half years.

Monday’s first-quarter gross domestic product (GDP) data underlined the broadening effect of the outbreak, with exports plunging the most since the devastating March 2011 earthquake and tsunami. Global lockdowns and supply chain disruptions have also hit shipments of Japanese goods.

Our Impact team has more here.

Fiji High Court Judge Justice Salesi Temo has quashed 49 of 51 cases relating to breaches of curfew and social distancing restrictions, saying the penalties imposed by the lower court were cruel, degrading and, or, disproportionately severe, according to a report in the Fiji Sun.

Justice Temo noted that many of those convicted had been fined, but lacked the means to pay the fine and whose livelihoods had been adversely affected by the coronavirus pandemic.

“Most were unemployed or subsistence farmers,” the judge said. “If they were working they were not earning that much in a week. Most of them pleaded guilty on the first call, and most were first offenders.”

The World Health Assembly (WHA) is due to start a key meeting in a few hours time, and calls for an independent probe into the coronavirus pandemic are growing.

Australia says more than 100 countries, including 50 African nations and all European Union member states, are backing a resolution calling for an investigation.

There is also pressure on the assembly over Taiwan, which is pushing to be heard in the face of Chinese opposition. Read more here.

The World Health Assembly is due to hold a virtual meeting on Monday [File: Fabrice Coffrini/AFP]

El Salvador’s Attorney General has challenged a presidential decree declaring a state of emergency as unconstitutional.

President Nayib Bukele announced the extension on Saturday without securing the backing of lawmakers.

Bukele, a 38-year-old who was elected last year, maintains he is within his rights.

“All presidents in the democratic history of our country have had the power to declare a state of emergency and have exercised it, without legislative approval,” he said.

In a televised speech to the nation on Sunday he urged all arms of the government to come together to tackle the coronavirus.

Honduras has extended a blanket curfew for a week.

The curfew was first imposed in mid-March to avoid the coronavirus overwhelming the country’s health system and will now remain in force until May 24.

Malaysia’s parliament started a one-day session on Monday by giving a standing ovation to the country’s front line workers.

Led by the King, MPs, Senators and guests joined in the applause.

Parliament will sit for a single day with the King’s speech the only item on the agenda. It is the first time the house has sat since a power grab in late February that led to the resignation of Prime Minister Mahathir Mohamad, and the collapse of the Pakatan Harapan government. After a week of turmoil, the King appointed Muhyiddin Yassin prime minister, saying he believed he had the support of a majority of MPs.

South Korea has reported 15 new cases of coronavirus with signs the cluster centred around a Seoul clubbing district is slowing.

The Korea Centers for Disease Control and Prevention (KCDC) says five of the cases were locally-acquired, with the remainder imported, according to Yonhap news agency.

One new death was reported bringing the total to 263.

China’s National Health Commission has reported seven new cases of coronavirus, two of them in the northeastern province of Jilin where a partial lockdown is in place.

Shanghai also had one case, while the rest were confirmed among travellers returning from overseas in Inner Mongolia.

The first Economic Society of Australia-Conversation poll asked 43 of the country’s leading economists whether they agreed, disagreed, strongly agreed or strongly disagreed with the proposition below:


The benefits to Australian society of maintaining social distancing measures sufficient to keep R less than one for COVID-19 are likely to exceed the costs.

Almost three quarters backed the proposition, 23 of them “strongly”. Only nine disagreed.

R is the repoduction number for the virus and measures the average number of other people someone who already has coronavirus will infect. When R is below one, the outbreak will begin to peter out.

01:00 GMT – UN chief calls on Bangladesh to move Rohingya back to camps

UN Secretary General Antonio Guterres is calling on Bangladesh to move Rohingya refugees held on a flood-prone island after being rescued from ships stranded at sea to be returned to the main refugee camps.

Bangladesh says the 308 Rohingya were sent to Bhashan Char island because of coronavirus concerns.

“While those rescued at sea may be quarantined for public health purposes, they must also be extended the protection they deserve as refugees,” Guterres said in a letter to Bangladesh’s foreign minister A.K. Abdul Momen that was obtained by AFP.

“I trust that they too will benefit from the humanitarian services offered to the Rohingya in Bangladesh and that, at the end of their quarantine period, they will be allowed to return to their families in Cox’s Bazar.”

Four cases of coronavirus have so far been detected in the camps. Read more on the story here.

A health worker from an aid organisation in the Kutupalong Rohingya refugee camp in Cox’s Bazar last month. Four cases of coronavirus have been confirmed in the camps [Shafiqur Rahman/AP Photo]

Brazil’s President Jair Bolsonaro continues to defy advice on social distancing even as the coronavirus outbreak in Brazil worsens.

On Sunday he posed for selfies with at least three children picked out from a crowd of supporters who had congregated outside the presidential palace, Reuters news agency reported.

In an online video, Bolsonaro said he welcomed the demonstration.

“Above all (the people) want freedom, they want democracy, they want respect,” he said.

A group of 249 Hong Kong residents stranded in India have arrived back home on a chartered flight.

The plane left New Delhi at about 11pm on May 17 local time (17:30 GMT), according to a Hong Kong government statement. The passengers include seven children under two years of age. They will all be required to undergo COVID-19 testing and spend 14 days in compulsory quarantine.

Read all the updates from yesterday (May 17) here.