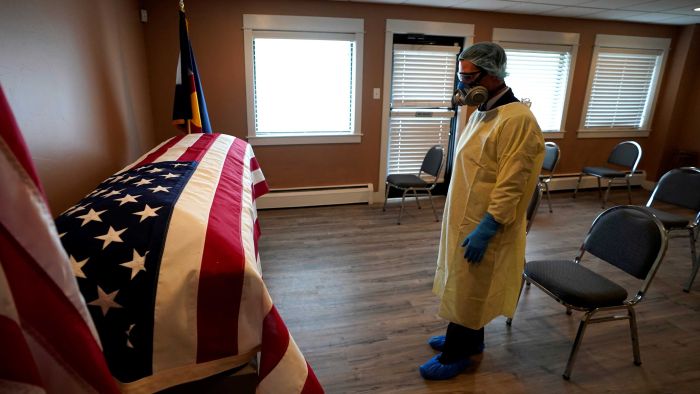 With more than 1.5 million confirmed cases and 90,000 Americans dead, US President Donald Trump is determined Americans will have coronavirus treatments manufactured there, handing out a billion dollar contract.

Wednesday’s key moments:US seeks to end dependence on other countries for pharmaceuticals

United States President Donald Trump’s administration awarded a contract worth up to $US812 million ($1.2 billion) for a new US company to manufacture drugs and drug ingredients to fight COVID-19 on American soil, aiming to end dependence on other countries.

The announcement comes as the US records more than 90,000 deaths and 1.5 million confirmed cases of the coronavirus, according to figures by Johns Hopkins University.

The administration has been looking to build up the ability to produce drugs and their raw materials in the US after the global pandemic exposed the industry’s dependence on China and India for its supply chain.

The US Department of Health and Human Services said that it had awarded a 4-year, $US354 million contract to privately-held Phlow Corp to make COVID-19 drugs, other essential drugs and their ingredients.

The contract can be extended for up to $US812 million over 10 years.

Phlow said all pharmaceutical products will be made in the US and the contract will help it contribute to a national stockpile of active pharmaceutical ingredients for essential medicines.

The death toll from coronavirus has topped 35,000 in Britain according to official government figures, but that figure could be closer to 45,000 according to the UK’s Office for National Statistics (ONS).

The rise was an increase of 545 on the figure provided on Monday.

The official government figures, which come from the Department of Health and Social Care, differ from the ONS numbers as the include only people who died who had previously tested positive for COVID-19, whereas the ONS numbers include all suspected coronavirus deaths.

Tuesday’s numbers from the ONS paint a grim picture in care homes, more than a third of which have been stricken by COVID-19.

Deaths in care homes across the United Kingdom topped 10,000 as of May 8, although the increase has slowed over the last couple of weeks.

“Deaths in all settings including care homes are falling … but we need to do all we can to continue to protect the most vulnerable in our care homes,” a spokesman for Prime Minster Boris Johnson said.

Meanwhile the UK’s treasurer warned parliament there would not be an immediate bounce-back for the nation’s struggling economy as Britain recorded its highest number of people claiming unemployment benefits since 1996.

“It is not obvious that there will be an immediate bounce-back,” Chancellor of the Exchequer Rishi Sunak told the House of Commons, saying the retail sector, for example, would still face restrictions when it reopens.

“We are likely to face a severe recession the likes of which we have never seen,” he said.

“In all cases, it will take a little bit of time for things to get back to normal, even once we have reopened currently closed sectors.”

The UK has been in lockdown since March 23 but some workers were asked to return to work last week.

British F1 GP under threat Plans for the season would be disrupted by teams being forced into two weeks’ quarantine every time they return from abroad.(Reuters: Albert Gea)

Formula One said the UK Government’s quarantine plans would rule out a British Grand Prix and affect tens of thousands of F1-related jobs if exemptions are not granted for sport.

Ministers said they plan a 14-day quarantine for most people arriving in the country in the coming weeks to try to prevent a second peak in the COVID-19 pandemic.

Formula One is planning two Grands Prix without spectators at Silverstone, which this year marks the 70th anniversary of hosting the first world championship race, immediately after two in Austria in early July.

Seven of the 10 Formula One teams are based in England and plans for the season, which has yet to start due to the pandemic, would be disrupted by teams being forced into two weeks’ quarantine every time they return from abroad.

“A 14-day quarantine would make it impossible to have a British Grand Prix this year,” a Formula One spokesperson said.

“It has a major impact on literally tens of thousands of jobs linked to F1 and the supply chains. If all elite sport is to return to TV, then exemptions must be provided.”

WHO chief says he will keep leading virus response after US threat The WHO declined to comment directly on Mr Trump’s threat to quit the international organisation.(AP)

The World Health Organization’s head said he would keep leading the global fight against the coronavirus pandemic, after US President Donald Trump threatened to cut off funding and quit the body.

WHO Director-General Tedros Adhanom Ghebreyesus defended the agency’s role after the US again withheld full support for a resolution on the pandemic.

“We want accountability more than anyone,” Dr Tedros told a virtual meeting of the WHO’S 194 member states.

“We will continue providing strategic leadership to coordinate the global response.”

The WHO declined to comment on Mr Trump’s threat to quit the international organisation, saying only that it had received his letter and was considering its contents.

Washington allowed the resolution calling for a review into the global response to the pandemic to pass by consensus, but said it objected to language about reproductive health rights and permission for poor countries to waive patent rules.

The US mission in Geneva said in a statement that paragraphs on the right of poor countries to waive patents to obtain medicine during a health emergency would “send the wrong message to innovators” trying to produce new drugs and vaccines.

They added that the WHO’s reproductive healthcare language could be interpreted as requiring countries to permit abortion.

“The United States believes in legal protections for the unborn,” it said.

Sweden tops Europe COVID-19 deaths per capita Sweden has kept most schools, restaurant and businesses open during the pandemic.(TT via AP: Anders Wiklund)

Sweden, which has opted for a more open strategy in combating the virus than other European countries, has the highest number of deaths in Europe per capita from the COVID-19 disease over the last seven days, data showed.

Sweden has kept most schools, restaurant and businesses open during the pandemic.

While deaths are on the decline, Sweden had 6.25 deaths per million inhabitants per day in a rolling seven-day average between May 12 and May 19, according to Ourworldinsata.org.

That was the highest in Europe and just above the United Kingdom, which had 5.75 deaths per million.

Over the course of the pandemic Sweden still has fewer deaths per capita than the United Kingdom, Spain, Italy, Belgium and France, which have all opted for lockdowns, but much higher than Nordic neighbours Denmark, Norway and Finland.

Sweden’s strategy, mostly based on voluntary measures regarding social distancing and basic hygiene, has been criticised by some as a dangerous experiment with peoples lives, but also been put forward as a future model by the WHO.

Sweden’s open strategy seems to have softened the blow on the economy, with growth shrinking much less than in Denmark and Norway in the first quarter.

This chart uses a logarithmic scale to highlight coronavirus growth rates. Read our explainer to understand what that means — and how COVID-19 cases are spreading around the world.Wuhan tests more than 400,000 people for COVID-19 in one day Wuhan is aiming to test all of its 11 million residents to look for asymptomatic carriers.(Reuters: Aly Song)

The city of Wuhan, the original epicentre of the coronavirus outbreak in China, conducted 467,847 nucleic acid tests on one day in May 18, a local health authority said.

The staggering number is up from the 335,887 tests a day earlier.

Wuhan kicked off a campaign to test all of its 11 million residents last week to look for asymptomatic carriers — infected people who show no outward sign of illness.

On May 9-10, the city confirmed its first cluster of COVID-19 infections since it reopened from a 76-day lockdown in April.

“We have a shared vision for the region — one that includes rule of law, transparency, prosperity, and security for all,” Mr Pompeo said in a statement.

His statement sharply contrasted recent US criticisms of China, which claims Taiwan as a province.

Since the coronavirus was discovered in China’s Wuhan province less than six months ago, tensions have mounted between the United States and its trade-war foe China.

“The recent COVID-19 pandemic provided an opportunity for the international community to see why Taiwan’s pandemic-response model is worthy of emulation,” Mr Pompeo said.

China views Ms Tsai, who will be sworn into office for her second and final term on Wednesday (local time), as a separatist bent on formal independence for Taiwan.

At her inauguration, Ms Tsai is expected to say that Taiwan will seek to “actively participate” in international bodies and deepen its cooperation with like-minded countries, generally a reference to the United States and its allies.

Spaniards to change habits post lockdown In Barcelona, people living within a kilometre of a beach will be allowed to sunbathe on the sand.(AP: Emilio Morenatti)

Spain lifted a ban on direct flights and ships from Italy but maintained a block on cruise ships, as a survey showed the coronavirus outbreak had put locals off travelling.

A reduced death rate from COVID-19 has encouraged Spain, with the world’s fourth-highest number of infections, to begin easing one of Europe’s strictest lockdowns.

But the tourism-dependent economy is likely to have to wait until late June to welcome holidaymakers back.

In Barcelona, people living within a kilometre of a beach will be allowed to sunbathe on the sand from Wednesday (local time).

The pandemic has become Spaniards’ biggest worry, and most of them plan to change habits when they are free to move, according to a poll by the Government’s Centre for Sociological Studies.

Just 14 per cent of those surveyed said they planned to travel abroad when the lockdown is lifted. Big purchases are on hold — only 4.2 per cent were thinking about buying a new car and 3.4 per cent a house.

Bars and restaurants will have to coax back the 30 per cent of people who said they preferred not to eat outside their homes.