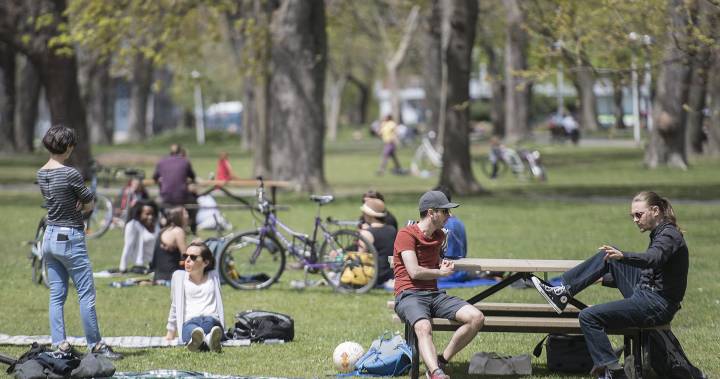 Quebec is softening restrictions on gatherings that were implemented to curb the spread of the novel coronavirus after roughly two months of lockdown.

Deputy Premier Geneviève Guilbault announced the measure during the province’s briefing on Wednesday, saying that a maximum of 10 people from three different households will be allowed to see one another as of Friday.

The gatherings must be outside and people must still keep two metres apart under the rules, according to Guilbault.

“We have to find a balance between our battle on the virus and the fact we want to return to a somewhat normal life,” she said.

Guilbault stressed that indoor gatherings are still banned for now and that the province wants to see how this next step goes. People should also wash their hands frequently, she added.

“You will be able to take advantage of the nice weather and the people around you,” she said.

Quebec is also moving forward with a staggered reopening of the next wave of businesses beginning next month.

Under the plan, private health services are allowed to resume on June 1 across the province. This includes dentistry, which has been limited to urgent procedures.

Beauty and esthetic services, such as salons, will be allowed to reopen on June 1 in most regions, except for the Greater Montreal area. A date for Montreal-area businesses has not yet been decided, according to Guilbault.

Quebec recorded 578 new infections, bringing the province’s total to 44,775 on Wednesday. The province has the highest caseload in the country.

— With files from the Canadian Press

Don't Miss it Superdrug is first high street shop to sell coronavirus antibody tests – but they’ll set you back £69 – The Sun
Up Next New coronavirus cases across the world jump by the most in a single day, WHO says