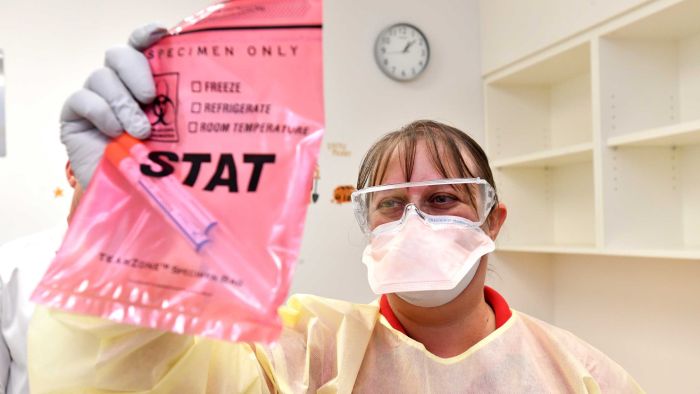 Health authorities in Queensland are trying to understand how a woman in Brisbane acquired COVID-19 following her positive test for the virus two months after returning from overseas.

Key points:Just 12 active cases in the state, with a record day of testingBorder likely to remain closed until SeptemberAll people test negative in Rockhampton after nurse fell ill

The woman is in her 70s and lives on Brisbane’s north side.

She was diagnosed with the virus overnight, two months after returning from India via Singapore.

Queensland’s Chief Health Officer Jeannette Young said authorities believed it was “most likely” that the woman contracted the virus in India and has had the condition ever since.

“She returned from India via Singapore two months ago and has now tested positive after developing some mild respiratory symptoms,” Dr Young said.

“At this stage, we’re not sure whether that is a persistent case or whether she’s acquired it here.

“We think it is most likely that she acquired the case in India, but we’ll now have to do a lot of work to work through that — some additional testing and we’ll also have to talk to her and do some additional contact tracing.

“That work has started.”

Health Minister Steven Miles said there are 12 active COVID-19 cases in the state, including four people in hospital.

He said so far 165,000 people had been tested for the virus across Queensland.

Mr Miles said a record 4,886 people were tested yesterday and called for anybody with symptoms to go to a doctor.

“We want to keep testing even more,” he said.

“We are setting a challenge to Queenslanders — can we break that record again?

Meanwhile, Dr young said all staff who were at risk of contracting coronavirus at an aged care facility in Rockhampton, in central Queensland, have tested negative after a nurse was diagnosed with the virus last week.

“But we all know that the incubation period is 14 days, so this will need to continue until that 14 days is up,” she said.

All residents at the 100-plus facility have been moved into individual rooms with their own bathrooms.

Border may be closed until September

Dr Young said there is only a slim chance the border could re-open in July, saying even a September re-opening was optimistic.

“If the tourist industry wants a realistic scenario, then they should be preparing for September,” she said.

Motorists are stopped at a checkpoint on the Gold Coast Highway at Coolangatta on the Queensland/NSW border border in March.(AAP: Dave Hunt)

“But I say to them, that if everything went perfectly and it was possible that maybe it could happen earlier, wouldn’t they also want to be prepared for that.”

Premier Annastacia Palaszczuk said she was “sorry” for the tough measures but it could save lives.

“We have to make measured and responsible steps as we open our economy, recognising the health implications,” she said.