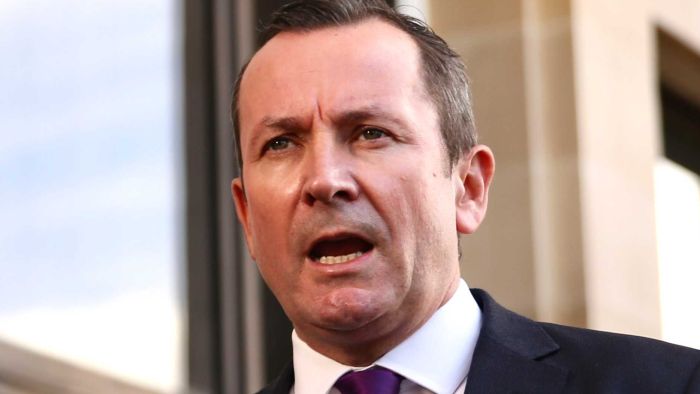 WA Premier Mark McGowan has hit back at calls from the New South Wales and Federal governments for interstate borders to be reopened, saying he will not be “bullied” by a state that allowed the Ruby Princess disaster to unfold.

Key points:Mr McGowan says NSW is in no place to give advice on border closuresHe says keeping WA’s border shut is based on health adviceNSW Premier Gladys Berejiklian says the policy will cost jobs

Mr McGowan said the WA border would remain closed for months to come and questioned whether NSW was in any position to be handing out advice.

“Their message is totally inconsistent.”

“We’re not going to give in to that sort of bullying by the New South Wales Premier or anyone else — we are going to protect the health and the economy of Western Australia.”

Professor Kelly said there was never national advice issued that states should close their borders, but he respected their decision to do so “to protect their own population”.

“From a medical point of view, I can’t see why the borders are still closed but as I said that’s for the states and territories to decide when that time is right for them,” he said.

But Mr McGowan maintained the WA Chief Health Officer and director general of the state’s Health Department had both advised it was an appropriate measure for Western Australia.

Queensland’s tourism industry has been lobbying hard for a reopening of the state’s borders as COVID-19 restrictions ease, but both Ms Palaszczuk and the state’s Chief Health Officer, Jeannette Young, have insisted they must remain closed.

Dr Young said Queensland could face “terrifying” consequences if the measures were relaxed too soon.

Mr McGowan said as long as the eastern states had high rates of community transmission of COVID-19, they would remain closed off from WA.

“New South Wales had the Ruby Princess — I mean, seriously? And they are trying to give us advice on our borders, seriously?” he said.

Mr McGowan said he would not be advised by a state that allowed the Ruby Princess coronavirus outbreak to occur.(AAP: Dean Lewins)

“Do you think I should listen to them? I’m not listening to them,” he said.

“Some eastern states politicians don’t like it, [WA Opposition Leader] Liza Harvey doesn’t like it, but it is based on health advice, it is the best thing for the state.

In a statement, WA Chief Health Officer Andrew Robertson said state borders should not be reopened yet.

“With continued COVID-19 outbreaks in several jurisdictions, including 24 cases in the last three days across two jurisdictions, the risk of introduction across an interstate border remains,” he said.

“The reintroduction of COVID-19 back into the community from travellers could lead to substantial outbreaks that may require either delay in easing of further restrictions or reintroduction of social distancing and mass gathering measures.

“Until community spread is eliminated in the affected jurisdictions, which will require at least a month to confirm (two 14-day incubation periods), opening of the interstate borders is not recommended.”

Ms Berejiklian said her state was managing the coronavirus spread well and by keeping its state borders open it was also protecting NSW jobs.

“If other state premiers have chosen not to do that, that’s a matter for them, but it will hinder the nation,” she said.

“I can see Australia not reaching its potential if premiers don’t take down their borders.”

How will WA’s border closures work?

WA has closed its borders to the east for the first time in history. Here’s how you might be affected.

The WA Premier insisted becoming an “island within an island” was allowing WA to ease internal restrictions further than other states and boost its economic activity.

Since Monday, West Australians have been allowed to gather in groups of up to 20, including for dine-in meals in restaurants, cafes and bars under strict conditions.

In many other states, including NSW, venues are restricted to 10 patrons.

Hospitality venues in WA have been allowed to re-open for dine-in meals for up to 20 people, compared with 10 in NSW.(ABC News: James Carmody)

“It actually supports our economy to have the border with the east, it actually allows us to free up more activity within Western Australia,” Mr McGowan said.

“Have a look at those states, New South Wales has barely got its schools open, they’ve got 30 per cent attendance, they’ve got 10-people limits in restaurants and cafes.

“The Premier over there is saying don’t catch a bus or a train, yet they are saying people from New South Wales should fly here? No, thanks.”

How WA will relax restrictions

Here’s a guide to help you work out what will be allowed from May 18 and what is still off limits.

Ms Berejiklian suggested opening interstate borders would likely prove to be more beneficial for other states than it would for NSW.

“If you are a tourism operator or someone running a business in one of those other states, you would feel a bit concerned about the prospect of not having that increased economic activity,” she said.

“I’m speaking more as a citizen of Australia when I say it’s in Australia’s best interests for those borders to come down.”

The NSW Premier acknowledged people were concerned about the levels of international travel through Sydney, but insisted it was being carefully managed.

“But with the quarantine restrictions in place, there is no reason for people to feel concerned, because we’ve demonstrated our ability to keep people in quarantine who have the virus,” she said.

This chart uses a logarithmic scale to highlight coronavirus growth rates. Read our explainer to understand what that means — and how COVID-19 cases are spreading around the world.WA adopting an ‘all-or-nothing’ approach

But he said no definitive measure had been decided and when borders did eventually reopen, they would be likely to be opened to all states at the same time.

“We really need to undertake an all-or-nothing approach to this in terms of interstate borders,” he said.

“Like everyone else we are eager to bring the nation back together, but we have to make sure that the hard borders continue to do what they’ve always [been] intended to do, which is to keep Western Australians safe.”

The WA Opposition has called for a gradual relaxation, with Liberal leader Liza Harvey saying she would like to see the WA border opened to people from the Northern Territory and Queensland.

“The states where there was no community spread of COVID-19, I can’t see the argument for keeping the borders shut — bearing in mind we’ve got 262,000 people unemployed or underemployed, struggling to pay their bills, wondering what the future holds,” she said.

“The argument to keep the borders closed is starting to fall apart and I think we need to review it, in the interest of our jobs and the economy.

“We need tourists, our businesses are closing every day for lack of customers.”

Geoff Hard runs winery tours in WA’s Margaret River region, but has not had any bookings in more than two months. He said he felt conflicted about the hard state border.

Winery tour operator Geoff Hard supports the border closure even though it has taken away many of his customers.(ABC News: Anthony Pancia)

“As a tour operator it’s very frustrating, because that’s where our business comes from,” he said.

“But from a human being’s perspective, I really have to say that I have to congratulate Mark McGowan on his efforts to keep WA, and particularly the South West, almost free of coronavirus.”

The constitutional legality of the closure of state borders in Australia has been questioned by some experts.

University of Sydney constitutional law Professor Anne Twomey told ABC Radio Perth if the hard border was kept in place for too long it could be unconstitutional.

“The Constitution, in section 92, says that intercourse among the states, that means moving people and goods across borders, should be absolutely free,” she said.

“Now that … should mean that you can’t block the borders, but the courts have long accepted that you can do so if it’s for a legitimate reason and it’s reasonably necessary to do it.

“I think most people would accept that at the time it was done we had an exponential curve going on, and increased cases et cetera.

“The real question though is whether now it is still reasonably necessary given the current facts.”

Mr Cook said he was very confident in the decision to close the border.

“If someone wants to challenge that in the High Court, good luck to them, I say fill your boots,” he said.

Don't Miss it With 743 new COVID-19 cases reported in Tamil Nadu in a day, state total crosses 13,000
Up Next Trump was being "sarcastic" when he suggested injecting disinfectant to treat COVID-19 | ABC News