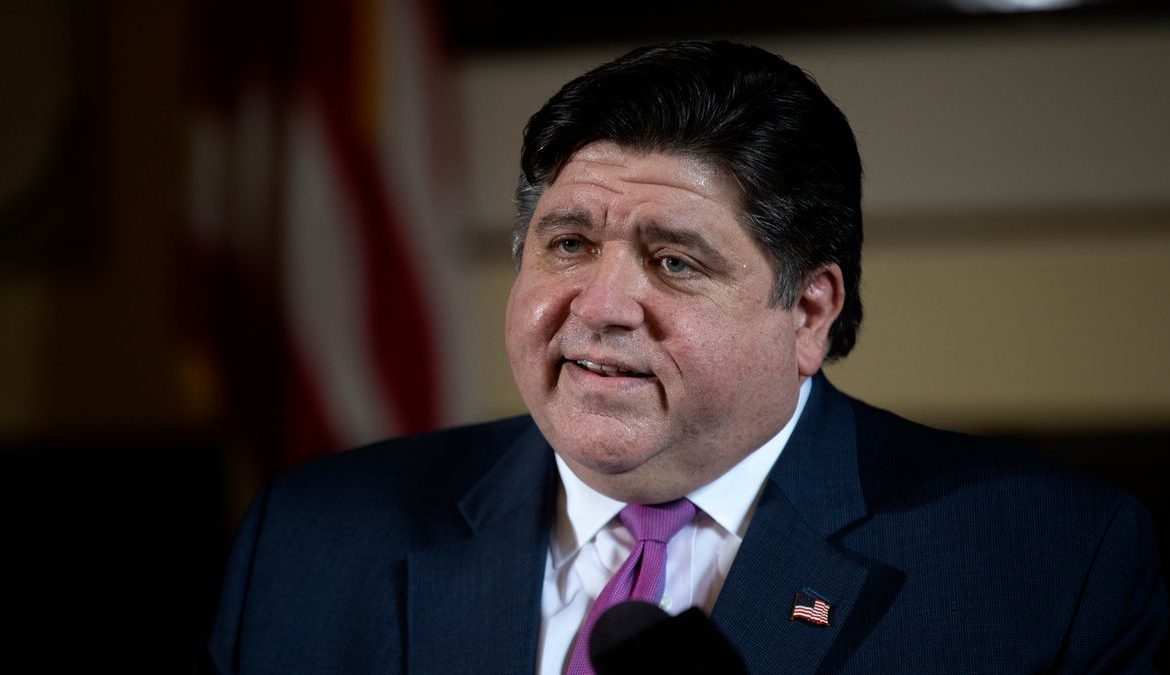 Under mounting pressure from thousands of establishments, Gov. J.B. Pritzker announced Wednesday that Illinois restaurants and bars will be allowed to reopen with limited outdoor seating as soon as next week. The alfresco dining option represents a slight softening of the governor’s plan as many neighboring states have moved much faster to allow restaurants to reopen.

Meanwhile, the first day of the Illinois General Assembly’s special pandemic session was a mix of political drama and showmanship. As Pritzker backed off a proposal that would have businesses facing a misdemeanor criminal charge for opening in violation of his stay-at-home order, a Downstate Republican lawmaker was ejected from the temporary home of the Illinois House in a bipartisan vote for not wearing a mask in violation of the chamber’s coronavirus-inspired health rules.

Here’s what’s happening Thursday with COVID-19 in the Chicago area and Illinois:

1:45 p.m.: Chicago restaurants won’t be ready to open to outdoor dining on May 29

Chicago Mayor Lori Lightfoot said city restaurants won’t be ready to reopen to outdoor dining by May 29 but she hopes they will be ready in June. Lightfoot made the comments after Illinois Gov. J.B. Pritzker opened the door to potentially lift the restriction on sit-down dining next week. While “heartened” by Pritzker’s comments, Lightfoot said she wants a more robust plan to make sure restaurants can reopen safely. Check back for updates. —Gregory Pratt

After losing an initial ruling in state court, the Illinois attorney general’s office Thursday moved to federal court a lawsuit challenging the validity of the state’s stay-at-home coronavirus order.

Attorney General Kwame Raoul’s office stated in its court filing that it was moving the case from state court because it involves U.S. constitutional rights of free religion and due process.

The suit, brought by state Rep. Darren Bailey, was set for a hearing at 1 p.m. Friday before Clay County Judge Michael McHaney, who had said he would resolve the case then.

McHaney had previously ruled that Bailey was not bound by Gov. J.B. Pritzker’s executive order shutting down most businesses and churches and requiring people to stay at home with certain exceptions.

Bailey is now attempting to broaden that ruling to make the order invalid for all citizens statewide. Read more here. —Robert McCoppin

Commissioners voted 15-2 to extend the disaster proclamation, which allows Preckwinkle to make decisions without the board’s direct approval, such as issuing executive orders, moving money around and procuring essential supplies such as personal protective equipment. Preckwinkle’s current declaration, approved mid-March, is set to expire at the end of this month.

“I want to just point out that this is not a power grab,” said commissioner Larry Suffredin, D-Evanston, a co-sponsor of the resolution. “A power grab is when you’re grabbing something for fun. This is putting yourself in a position where you create more stress because we’re dealing with such difficult matters.”

Amazon Studios is casting Chicagoans for its docuseries “Regular Heroes,” which highlights essential workers who are making a difference in their community during the coronavirus pandemic. The weekly docuseries premiered May 8. Read more here. —Tracy Swartz

10:53 a.m.: Admiral Theatre is among a bevy of adult businesses suing to get a PPP loan. So far, the nightclubs are winning.

At issue is a long-standing SBA restriction on loans to businesses that present live performances of a “prurient sexual nature.” Lawsuits brought by adult clubs in Illinois, Wisconsin and Michigan argue they should be eligible for federal emergency relief, just like any other small business.

“This is not an adult entertainment issue,” said Luke Lirot, a Florida attorney representing the Admiral Theater in the lawsuit, which was filed May 8 in Chicago federal court. “This a guy that sweeps the floor that’s not getting a paycheck issue.”

On Wednesday, the 7th U.S. Circuit Court of Appeals in Chicago handed the adult nightclubs a major victory, refusing to block a Wisconsin federal court decision that the SBA couldn’t deny a PPP loan to a Milwaukee gentlemen’s club based solely on the prurient ineligibility standard. Read more here. —Robert Channick

9:53 a.m.: Coronavirus ‘does not spread easily’ on contaminated surfaces: CDC

The uncertainty surrounding coronavirus has been a huge source of anxiety throughout this pandemic, as scientists have struggled to uncover not just a treatment for the disease, but also basic facts about its existence.

Though many have been concerned about infection through items like groceries or mail deliveries, the Centers for Disease Control and Prevention has recently issued updated guidance saying that coronavirus “does not spread easily” from touching surfaces or objects. Read more here. —New York Daily News

9:28 a.m.: Will Trump wear a face mask at Michigan Ford plant? The company and the state’s attorney general think he should.

A day after threatening to withhold funds over Michigan’s mail-in ballot effort, President Donald Trump was set to visit the electoral battleground Thursday to learn how the medical breathing machines governors begged for during the height of the coronavirus pandemic are made.

But hovering over his visit to a repurposed Ford Motor Co. factory in Ypsilanti, outside of Detroit, is whether he will wear a face covering.

Trump has refused to wear a face mask in public, a practice that federal health authorities say all Americans should adopt to help slow the spread of the virus.

Ford says everyone in its factories must wear personal protective equipment, including masks, and that its policy has been communicated to the White House. Trump wouldn’t commit to wearing a mask at the plant when he was asked about the matter earlier this week. Read more here. —Associated Press

With the release Thursday of weekly jobless claims from the U.S. Department of Labor, Illinois hit a milestone: Since mid-March, when the state’s stay-at-home order took effect, closing nonessential businesses and sending people home, more than 1 million residents of the state have applied for unemployment insurance benefits.

The state office that processes those applications says it has doubled the number of workers in call centers that assist those seeking jobless benefits.

Yet on social media and in calls to their elected representatives, applicants continue to complain about busy signals and other problems. Read more here. —Mary Wisniewski

More than 2.4 million people applied for U.S. unemployment benefits last week in the latest wave of layoffs from the viral outbreak that triggered widespread business shutdowns two months ago and sent the economy into a deep recession.

Roughly 38.6 million people have now filed for jobless aid since the coronavirus forced millions of businesses to close their doors and shrink their workforces, the Labor Department said Thursday.

With the latest report, Illinois crossed a new threshold as more than 1 million residents have sought unemployment insurance benefits since mid-March. In the most recent week that ended May 16, 72,816 people in the state filed initial claims for benefits, a slight increase from the prior week’s 72,671.

Nationwide, the number of weekly applications for benefits has slowed for seven straight weeks, and last week the figures declined in 38 states and the District of Columbia. Yet historically, they remain immense — roughly 10 times the typical figure that prevailed before the virus struck. Read more here. —Associated Press

Mayor Lori Lightfoot and city Health Commissioner Dr. Allison Arwady were scheduled to hold a news conference Thursday afternoon to announce “a package of mental health supports” for Chicagoans “facing challenges” because of the COVID-19 pandemic, according to the mayor’s office.

Mental health experts have said that social isolation driven by stay-at-home orders and other factors keeping people isolated during the coronavirus pandemic have led to increases in calls to crisis centers. Isolation and stress are often factors in people in substance-abuse recovery programs turning to drugs or alcohol again, even after long periods of abstinence, according to experts.

CVS Health on Friday plans to open COVID-19 testing sites at 17 CVS Pharmacy drive-thru locations in Illinois, the company said in a news release. A list of the expanded testing sites is available at cvshealth.com/covid-19/testing-locations.

The new testing locations will offer only self-swab tests, which will be available to patients meeting age guidelines as well as criteria from the U.S. Centers for Disease Control and Prevention, according to the company. Patients must register in advance and can begin making appointments for testing starting Friday.

At the test site, patients should stay in their cars and will be directed to the pharmacy drive-thru window, where they’ll be given a test kit and instructions; an employee will observe the self-swab process to make sure it’s performed properly, according to the news release.

Tests will be sent to an independent lab for processing and results are expected in about three days, according to CVS Health.

CVS Health expects to have up to 1,000 locations nationwide offering this service by the end of May, with the goal of processing up to 1.5 million tests a month, pending the availability of testing supplies and lab capacity, according to the news release. —Angie Leventis Lourgos

6 a.m.: Ahead of Memorial Day weekend, sun and sand are calling. But when will the beaches open?

It’s almost beach season along Lake Michigan, the saving grace of cities known for polar vortexes and frost in May, but this summer, the coast might look a little different.

Some beaches will be entirely empty, aside from a federally endangered bird or two attempting to fledge chicks. Some might have joggers and bikers moving along but no stationary picnics or sunbathers taking any prolonged breaks. Some barely exist because of near-record high lake levels and worsening erosion.

For dozens of communities along Lake Michigan, the rules to reopen beaches are a patchwork — much like the national response to the pandemic. Read more here. —Morgan Greene

6 a.m.: Residents say they are being kept in the dark about COVID-19 as nearly 90 deaths are recorded at low-income housing in Chicago.

At least three people have died from COVID-19 in the senior citizens’ high-rise where Laura Brownlee lives, including a close friend she visited often.

But the landlord has said nothing about them to residents, who are more vulnerable to the disease and might want to take extra precautions, like following the advice of city health experts and moving out of such housing when there’s a heightened risk.

“These are senior suites up in here, seems like someone should be coming in and testing everybody,” Brownlee said by phone. “I’m already afraid it’s all over. And I don’t wanna go out like that.”

Lutheran Social Services of Illinois, which runs Kingston Place on the South Side, would not comment on the three deaths reported there by the Cook County medical examiner’s office as of May 19. “In order to respect the privacy of the tenants of the building, we do not release information regarding deaths or those who choose to be tested and are confirmed positive.”

A Tribune investigation found that residents at subsidized housing across Chicago have been told little, if anything, about COVID-19 cases where they live, even though they are generally older and in poorer health and therefore at higher risk.

So far, 89 people in low-income housing in the city have died from complications linked to the novel coronavirus. Half of them were older than 76, an analysis of data shows. Read more here. —Cecilia Reyes and Elvia Malagón

Here are five things that happened Wednesday that you need to know:

Here are five things that happened Tuesday that you need to know:

Here are five things that happened Monday that you need to know: