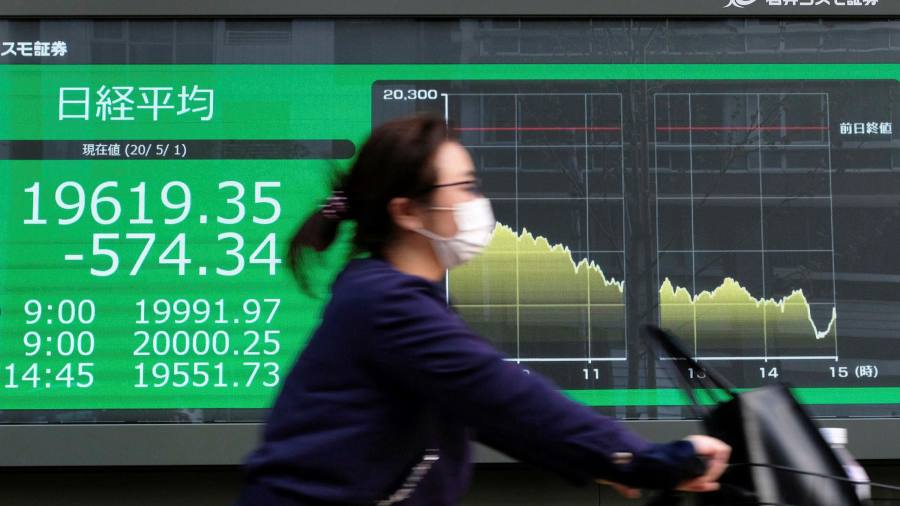 Stocks across the Asia-Pacific region lagged Wall Street’s strong performance overnight as concerns over the impact of the coronavirus on global trade outweighed the prospect of fresh support from central banks.

The losses in Asia came despite the S&P 500 closing 1.7 per cent higher on Wednesday after minutes from the US central bank suggested it was ready to further support the world’s biggest economy if there were additional outbreaks of the virus.

An early reading on exports from South Korea again highlighted the destruction to global demand that the virus has caused and the difficulties in re-starting economies following lockdowns. Exports from Asia’s fourth-largest economy for the first 20 days of May shrank more than 20 per cent year on year as imports fell almost 17 per cent, official data showed on Thursday.

“The upshot of today’s figures is that April’s weakness has continued into May,” said Alex Holmes, Asia economist at Capital Economics. “And this is also likely to be true for elsewhere.”

Japanese trade data for April was also weak, with a nearly 22 per cent contraction in exports marking the worst month since 2009.

Global equity markets have rallied in recent weeks on a potent combination of central bank support and hopes of a vaccine coupled with a strong rebound in business and industrial activity once governments ease lockdown measures.

But futures markets pointed to losses for US equities when Wall Street opens later in the day, with the S&P 500 tipped to drop 0.5 per cent. The FTSE 100 was expected to drop by as much.

In commodities, oil struggled to add to Wednesday’s rally, which came after an Energy Information Agency report showed that US crude oil inventories fell for a second straight week.

In currencies, the pound slipped 0.3 per cent against the dollar to $1.2205. Andrew Bailey, Bank of England governor, on Wednesday said that negative interest rates were under “active review” after claiming last week that such a policy was not under consideration. The UK sold negative-yielding government bonds for the first time on Wednesday.

Don't Miss it Coronavirus Live Updates: Lockdown Delays Led to at Least 36,000 More Deaths, Models Find
Up Next How can you tell the difference between coronavirus and a cold? Without a test, you can’t