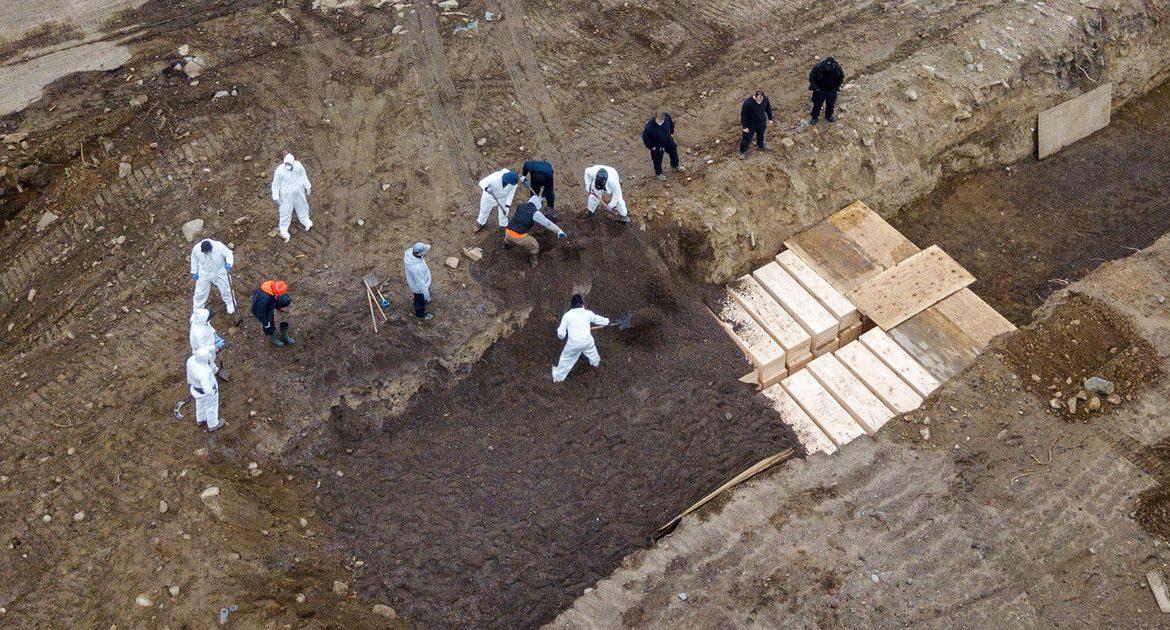 The first mass graves could be dug in the UK to cope with a rise in bodies due to the coronavirus.

Aberdeenshire Council is considering making them capable of holding hundreds of coffins as part of measures to deal with the Covid-19.

Latest figures from National Records Scotland show that only 99 people have died in the region from coronavirus with 3,213 dying in Scotland.

Philip McKay, head of roads, landscapes and waste services at the council, said at a virtual council meeting that initially the region’s funeral industry looked bleak from initial forecasts.

Officials in New York City, US have already started stacking wooden coffins next to each other in deep trenches on Hart island.

It comes after the city experienced more than 10,000 deaths from Covid-19 last month causing morgues across the city to become overwhelmed.

Mr McKay said: “As part of that modelling there were ideas similar to New York’s approach, that we may have to open what effectively would be strip lairs.

“It is an absolutely draconian measure and one we didn’t take lightly and one we hoped we will never have to put in place.

“We were also considering the preemptive opening of lairs, which means the lair would be open before we had notification of the requirement for it.”

Coronavirus has seen a major spike in mortality
(Image: REUTERS)

The mass graves would be dug discreetly as officials added that it wouldn’t be “appropriate to be done with members of the public” present.

Cllr Peter Argyle, chairman of Aberdeenshire Council’s infrastructure and services committee , said in a statement: “The service has prepared for the worst case scenario and hopefully that will never be needed – but we need measures and plans in place.

Academics also suggested that mass graves could be introduced if death and bereavement services are inundated with bodies from the Covid-19 crisis.

The experts from the University of Huddersfield believed it would spark a major increase in mortality rates.

Coupled with staff absences, the researchers say that this would lead to struggles issuing death certificates, a bottleneck in funeral services and overfilled mortuaries.

Dr Julia Meaton, Dr Anna Williams and researcher Helen-Marie Kruger, authors of the paper, said: “The impact of such an increase from normal levels will mean that the authorities will struggle to maintain death registrations and disposals that will potentially have serious consequences.

“Practically, not being able to register a death or obtain a death certificate will mean that disposal cannot take place.

The authors continued: “There will be a bottleneck of burials and cremations, causing ceremonies to be delayed with mortuaries filled beyond capacity.

“Families will be prevented from closing bank accounts, pensions, selling property or receiving insurance, which could have financial implications.”

Smaller plots, which are ten yards long and two yards wide, were previously created at Kemnal Park Cemetery in Chislehurst, London for members of the Islamic community.

The UK’s death toll has increased by 363 to 35,704 as the downward trend continues, Culture Minister Oliver Dowden said.

Don't Miss it Nurse Shares COVID-19 Before-and-After Photos to Prove It’s Not Just the ‘Sick and Elderly’ at Risk
Up Next Coronavirus test: Toronto’s reopening will challenge our resilience