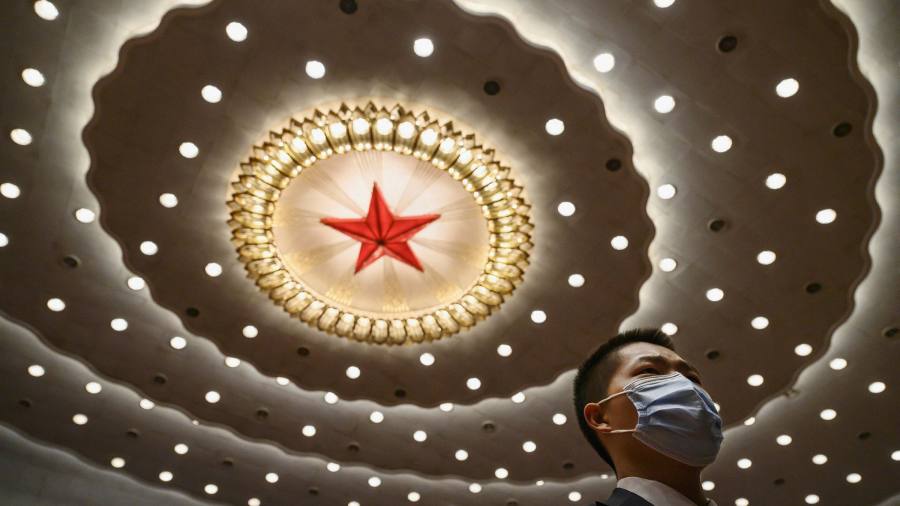 China’s National People’s Congress has abandoned setting a gross domestic product target for the first time as the country faces its most severe economic downturn since the 1970s in the wake of the coronavirus outbreak.

The growth target is normally included in the work report that is presented at the annual gathering of lawmakers, which was delayed by almost three months this year owing to the pandemic.

Many experts do not trust China’s reported economic figures, but the target often provides guidance on the central government’s confidence in underlying economic conditions.

The economy contracted by 6.8 per cent in the first quarter of the year after activity ground to a halt during the coronavirus outbreak. Many economists’ outlooks for 2020 are less than half of the 6.1 per cent growth rate posted last year.

Li Keqiang, the Chinese premier who delivered the work report on Friday, noted that the government refrained from setting a GDP target not because of domestic conditions but because foreign markets were so uncertain.

The outbreak initially devastated China’s capacity to manufacture products in its factories. But as the virus spread across the globe, demand from other markets for Chinese goods fell dramatically.

Mr Li noted that the negative growth caused by the economic slowdown was worth the lives saved.

“Life is invaluable,” he said. “This is a price we must pay, and a price worth paying.”

Many economists have argued that the target should be ditched because it promotes wasteful, low-quality growth. The goal often pushed provincial officials to generate production regardless of demand.

“China’s decision to eschew a GDP growth target rightly de-emphasises growth at all costs and shifts the emphasis to the quality and sustainability of growth,” said Eswar Prasad at Cornell University.

“The government has wisely used the opportunity provided by the highly uncertain economic outlook in the aftermath of the coronavirus outbreak to drop the growth target.”

The work report said that China was expected to raise its fiscal deficit to more than 3.6 per cent of GDP, up from 2.6 per cent last year. It will also issue Rmb1tn in treasury bonds to mitigate the impact of Covid-19.

China has largely controlled the outbreak of coronavirus on its own soil. But the Communist party and its leader Xi Jinping still face some of the greatest challenges in several generations.

Mr Li listed several of the leadership’s worries: “Pressure on employment has risen significantly. Enterprises, especially micro, small and medium businesses, face growing difficulties. There are increasing risks in the financial sector and other areas.”

China faces deepening tensions with the US, too. The world’s two largest economies have traded barbs over the origins and early containment of the coronavirus outbreak. Analysts have warned that the friction threatens the first phase of a trade deal agreed with the US at the start of the year.

Greater US support for Taiwan has also angered Beijing, which claims the island as its own.

Western experts debate the degree to which China’s official budget excludes aspects of military spending. The International Institute for Strategic Studies, a London-based think-tank, normally add about 33 per cent on top of the given figure.

An independent estimate by the Stockholm International Peace Research Institute think-tank put the US military budget in 2019 at $732bn, representing 38 per cent of global defence spending, compared with China’s $261bn over the same period.

Hu Xijin, editor of nationalist tabloid Global Times, argued on microblog Weibo that China needed to keep increasing its budget owing to the shifts in the global order during the pandemic, which made the US act in an “unprecedentedly rash” manner.

“China needs to strengthen military strength as a deterrence and to ensure that the US dares not carry out a reckless attack,” he wrote.