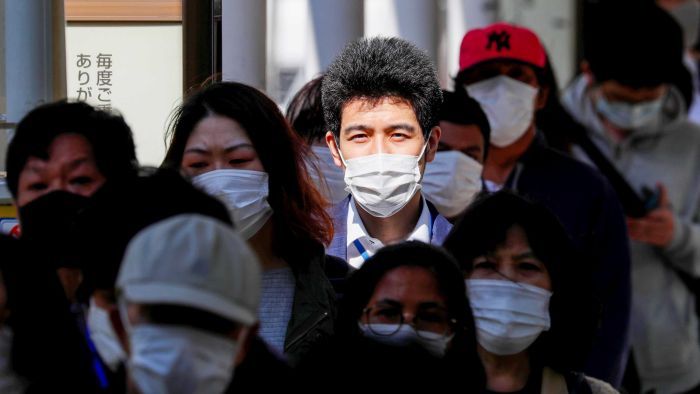 Crushingly crowded public transport. The world’s oldest population. A huge outbreak on a cruise ship. A state of emergency without penalties.

Key points:Japan has had about 800 COVID-19 deaths and 16,000 infectionsA state of emergency could be fully lifted in all regions by May 25One public health expert has described their success as a ‘mystery’

It sounded like a recipe for a coronavirus catastrophe, and there were fears among public health experts that Japan could become the next Italy or New York.

But it hasn’t happened.

The country hasn’t exactly escaped unscathed. About 800 people have died and more than 16,000 have been infected in a country of 126 million.

But in comparison, more than 90,000 Americans have died from COVID-19.

And Germany, which is widely hailed for its coronavirus containment strategy, has suffered about 8,000 deaths in a country of 83 million people.

The World Health Organization (WHO) sees Japan as a “success story” according to WHO senior adviser Nikki Shindo.

“Japan had cases much earlier than anybody else, but it kept the case count really low, considering its population density and movement of people.”

Japan was repeatedly criticised over a lack of testing, which some health experts said would hide the true picture of the virus’ spread in the country.

But still, the number of deaths has not exploded, the state of emergency has been lifted in most of the nation and the Government says the country is on the path to containment.

Japan’s apparent success may be a ‘mystery’

Pinpointing exactly why Japan has been able to keep deaths comparatively low has been a puzzle, according to Japan’s Nobel laureate Tasuku Honjo.

Despite a relatively relaxed approach to the pandemic, Japan has so far experienced about 800 COVID-19 deaths.(AP: Jae C. Hong)

“We may expect another wave,” the immunologist warned.

“But so far this is still a mystery to most of the medical scientists: why Japan, with such a relatively legally loose [state of emergency] system has quite remarkably [fewer] deaths and infections.”

Professor Honjo said it would take some time to work out conclusively what was happening, but there are a range of theories currently being examined.

“People in this country are generally very clean. They like to be clean, they wash hands very frequently on normal days and they don’t kiss, they don’t hug,” he said.

“There’s also [a] hypothesis that the BCG vaccination will help with boosting up the basic level of immunity.”

The BCG is a tuberculosis vaccination which is not widely used in Australia, the US or UK. But it’s still given to children in Japan.

Some Japanese health experts wonder if the tuberculosis vaccine still offered to children in the country may have offered some protection.(AP: Koji Sasahara)

There is Australian-led research looking into the BCG vaccine as a possible protection against COVID-19, but research leader Professor Nigel Curtis said it would take “many months” before they would have any results.

Kazuho Taguchi from Japan’s Health Ministry said he couldn’t “conclusively pinpoint” a reason for Japan’s success, but the nation’s strong health system and the fact many Japanese people wear masks may have helped.

“Japan has universal health coverage … and we are proud of this healthcare system that is not behind any other nation,” he said.

Once the virus began to spread in big cities the Government was forced to declare a state of emergency on April 7.

Japan’s state of emergency meant that people were encouraged to isolate, but restaurants could stay open and there were no legal penalties for leaving the house.(ABC News: Jake Sturmer)

But Japan’s “lockdown lite” was nothing like the strict measures seen in other countries, and largely depended on people volunteering to stay home.

Restaurants were allowed to stay open for certain hours, and some businesses said they had no other choice but to keep trading because they felt the Government compensation on offer was inadequate

The lockdown has since been lifted in 42 of 47 regions, and infections continue to fall in the capital, it could end in the greater Tokyo area as early as May 25.

One of the major differences between Japan and many other high-income nations is its philosophy on testing.

Rather than offer a COVID-19 test to everyone who wants one, Japan’s regime has been far more “strategic” to prevent the overloading of hospitals, according to the WHO’s Nikki Shindo.

COVID-19 tests were initially only available to people with serious symptoms in Japan, and those who were positive were taken to hospital.(Reuters: Issei Kato)

As of a few weeks ago, Japan was only doing about two tests for COVID-19 for every 1,000 people. Australia, by comparison, is doing more than 40 tests per 1,000 people.

Anyone who tested positive was swiftly isolated in hospital.

But it has not all been deliberate.

An initial lack of testing capacity and an overwhelming shortage of personal protective equipment for sample collectors and lab technicians also slowed the rate of tests.

Shinzo Abe’s team say even as testing ramped up, the number of positive cases continued to decline.(Akio Kon/Pool Photo via AP)

But Prime Minister Shinzo Abe’s expert advisers said that even as the number of tests increased, the number of positive cases continued to decline.

Despite criticism of Japan’s comparatively low test rate, Dr Shindo said strategic testing was key to prevent the system from being overwhelmed.

“Only one in five people are transmitting the [virus]. So you were just wasting the test to detect 80 per cent of the people who don’t really create the second generation of infection,” she said.

“What Japan did was really fantastic, because if you test everyone, for what? It’s not influenza. You don’t have the disease-specific antiviral,” Dr Shindo said.

People who test positive for COVID-19 but have mild or no symptoms can be isolated in hotel rooms.(Reuters: Issei Kato)

Japan has since relaxed its guidelines for testing, and local governments have also been transferring people with mild symptoms to hotels, freeing up hospital capacity.

“That movement will put other [parts of the] population at risk because those people will take a taxi [or] public transportation. They move,” she said.

“I think it’s wise not to do too many tests and really focus on the cluster detection and management of severe patients.”

But Professor Kenji Shibuya from the Institute for Population Health at King’s College London remains concerned.

With the country at times struggling to contain the virus over the last few months, he says they need to scale up capacity to prepare for a possible resurgence of cases.

“Even if this wave is managed with some luck, Japan should not consider that it is a success. [It] needs to put the system in place … to prepare for a resurgence, which will inevitably happen,” he said.

Japan has struggled at times to contain the virus

It’s fair to say not all has been perfect in Japan.

There was the sudden and unprecedented crisis of the Diamond Princess cruise ship that was thrust upon Japan in February, and left 712 passengers and crew infected.

Governments around the world — including Australia — organised charter flights to get their citizens off the ship docked at the port of Yokohama because of concerns about the quarantine.

Thousands of people were allowed to leave the Diamond Princess after quarantine, but some subsequently tested positive for the virus.(Reuters: Athit Perawongmetha)

When passengers were let off the ship, it was initially feared that the virus would spread widely in Japan, but that didn’t happen.

And despite Japan’s world class medical system, some medical facilities have struggled to cope with an influx of patients

A surge of infections within some hospitals in the country forced them to suspend outpatient treatment and cut back on other services.

An ambulance carrying a man with a fever and difficulty breathing was rejected by 80 clinics and forced to search for hours for a hospital in downtown Tokyo that would treat him.

Some hospitals were refusing suspected coronavirus patients because they were not designated infection hospitals, did not have enough equipment, or feared the infection would spread inside the facility.

Some medical clinics in Japan initially struggled to cope with the influx of patients in the first weeks of the pandemic.(Reuters: Issei Kato)

But there are signs the hospital system is now stabilising in many parts.

The Tokyo Metropolitan Government said as of May 19, there were fewer than 679 positive COVID-19 patients in hospital, and only 42 were in intensive care or on ventilators.

Japan may have escaped disaster, but the pandemic isn’t over

Professor Kenji Shibuya warns that there’s no cause for celebration just yet.

Some department stores are reopening in Tokyo as the country gradually lifts a state of emergency declaration.(AP: Eugene Hoshiko)

He also believes Japan got “lucky” that the virus was mostly contained to 13 regions.

“We have to be really careful about the decision to lift the declaration [of a state of emergency],” he said.

And while current figures show that the overall mortality rate in the capital Tokyo for the first three months of this year fell compared to the same time last year, Professor Shibuya is urging caution.

“There is a time lag between the onset and death, so we have to carefully look at mortality in April and May,” the Professor warned.

Signs suggest the initial public health challenge may be under control.

The mission for Japan now is to both prepare for a second wave and start rebuilding the world’s third largest economy, which has now entered a technical recession.

Don't Miss it WHO says South America new coronavirus ‘epicentre’: Live updates | News
Up Next Future of air travel: What could change because of Covid-19?