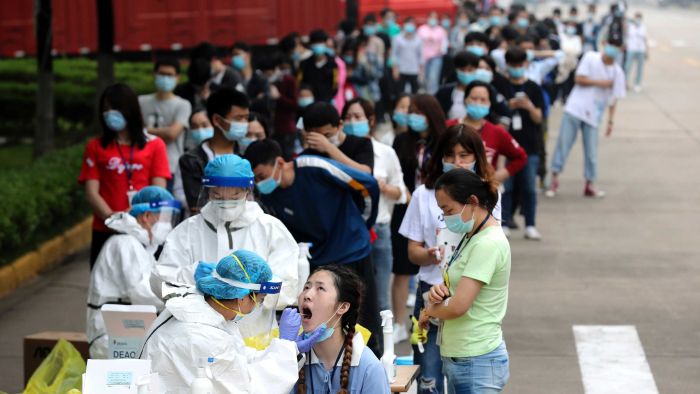 The Chinese city of Wuhan completed almost 1.5 million tests for the novel coronavirus in one day, as authorities undertake a testing blitz to avoid new clusters.

Meanwhile, US President Donald Trump returned to the links as the country marked its Memorial Day holiday weekend, the first time he has played golf since the coronavirus outbreak began.

This story will be regularly updated throughout Sunday.

Mr Cummings, who masterminded the 2016 Brexit campaign, travelled over 400 kilometres to his parents’ house during a nationwide lockdown.

His wife was showing COVID-19 symptoms at the time.

The Prime Minister’s office said Mr Cummings visited his parents to ensure his young son could be properly cared for, but the Opposition Labour Party said he flouted the Government’s own advice.

Mr Cummings told reporters he had no intention of stepping aside when asked if he was going to “consider [his] position”.

“Obviously not. Don’t think so. You guys are probably about as right about that as you were about Brexit,” he said.

Wuhan’s testing spree sees millions tested Wuhan’s program to test all of its 11 million people in 10 days is underway.(AP: Chinatopix)

The city of Wuhan, the original epicentre of the coronavirus outbreak in China, conducted 1,470,950 nucleic acid tests for the virus on Friday, the local health authority said. Some 1,000,729 tests had been completed the previous day.

By comparison, as of Friday, Australia had conducted more than 1,192,262 tests since the outbreak began.

Wuhan kicked off a campaign on May 14 to look for asymptomatic carriers — infected people who show no outward sign of illness — after confirming on May 9-10 its first cluster of COVID-19 infections since its lockdown was lifted on April 8.

Authorities have said they aim to test all 11 million of the city’s residents, an exercise likely to cost more than 1 billion yuan ($220 million).

China on Saturday reported no new confirmed cases for the first time since it began announcing infections in January.

Brazil has prohibited most foreigners from entering the country for another 30 days.

The country is home to the third-highest number of confirmed coronavirus infections in the world after the United States.

Commercial traffic is not affected by the measure and Brazilians and local residents will be allowed to enter. The decision was published in the official Gazette on Friday night, citing “health reasons”.

Brazil has reported more than 330,000 confirmed cases of COVID-19 and more than 21,000 deaths. Experts consider those numbers under counts because of the lack of widespread testing.

US President Donald Trump went on his first golf outing since the coronavirus pandemic broke out, visiting his club in the Washington suburbs in a purposeful display of normalcy.

Mr Trump’s motorcade took him from the White House to Trump National Golf Club, and he was spotted wearing a white cap and white polo shirt.

It was his first time at a golf property since March 8, when he visited his club in West Palm Beach, Florida.

That was the same weekend when he met at his Mar-a-Lago retreat with Brazilian President Jair Bolsonaro, whose press secretary later tested positive for the virus. Some White House staffers who had been in contact with the press aide went into quarantine afterward but none tested positive.

Mr Trump is eager to promote the idea that the United States is returning to normal, although the death toll from the coronavirus outbreak continues to rise and is expected to surpass 100,000 in the coming days.

More than 40 people have tested positive for COVID-19 after attending a religious service in Germany.

The service was held at a church in Frankfurt on May 10, after lockdown restrictions were eased.

Church officials said they adhered to social-distancing rules, and had disinfected the building ahead of the service.

Germany has recorded low numbers of coronavirus compared to much of Western Europe, allowing the country to ease restrictions over the past two weeks.

Spanish far-right protest against COVID-19 restrictions Spain’s lockdown successfully brought the contagion rate down from 20 per cent to 1 per cent.(AP: Manu Fernandez)

Several thousand followers of Spain’s far-right Vox party have gathered in Madrid and other cities to protest the Government’s handling of the coronavirus outbreak.

Prime Minister Pedro Sanchez announced that the country would reopen for international tourism from July, as the country emerges from one of Europe’s strictest lockdowns. Its football league will be allowed to resume from June 8.

Vox called for protesters to come in their cars and motorbikes to skirt the current prohibition on social gatherings in effect under a two-month long state of emergency.

“Let your desire be heard for the resignation of the Government,” Vox leader Santiago Abascal said from the open-top bus leading the cars inching down a Madrid boulevard. Vox called the protest the ‘Caravan for Spain and Liberty’.

Most cars were decked with Spanish flags and there were also small groups of people who participated on foot, with some not respecting the two-metre social distancing rules.

More protests were held in Barcelona, Sevilla and other provincial capitals. Over 28,000 Spaniards have been confirmed to have died from COVID-19.

The lockdown successfully reduced the daily contagion rate of over 20 per cent at the height of the crisis to under 1 per cent for the past week.

A new cluster of coronavirus infections has broken out in Malaysia at a detention centre for undocumented migrants, authorities have confirmed.

Malaysia has this month arrested more than 2,000 foreigners for not having permits that allow them to be in the country following raids in areas under lockdown. The centres they are detained in are often crowded, with dozens of migrants packed in a single cell.

The United Nations and rights groups have called on Malaysia to stop the crackdown and criticised authorities for going after a vulnerable community during the pandemic.

The South-East Asian country has so far reported 7,185 virus infections and 115 deaths.

The health ministry said on Saturday that 21 cases were identified at the Semenyih detention centre near the capital Kuala Lumpur, which houses around 1,600 detainees.

It is the second detention centre at which a cluster of virus infections has broken out. Around 60 cases were reported among the 1,400 detainees at the Bukit Jalil centre earlier this week.

In recent weeks, there has been public anger towards refugees and other foreigners, who have been accused of spreading disease, burdening the state and taking jobs as the economy plummets.

Rohingya refugees in particular have been targets of harassment and threats.

Thailand has begun testing a vaccine against the coronavirus on monkeys after positive trials in mice, an official says.

Thailand’s Minister of Higher Education, Science, Research and Innovation, Suvit Maesincee, said researchers had moved testing of the vaccine to monkeys and hoped to have a “clearer outcome” of its effectiveness by September.

“This project is for the human race, not just Thais,” Dr Suvit told reporters on Saturday.

The Prime Minister has outlined a policy that we must develop a vaccine and join the world community workforce on this.”

Thailand announced on Wednesday it was developing a vaccine — one of at least 100 potential vaccines in the works worldwide — and hoped to have it into production by next year.

The vaccine candidate being tested by Bangkok’s Chualongkorn University and two public sector partners harnesses messenger RNA technology, which unlike older types of vaccine does not contain any of the virus it seeks to attack.

It instead uses part of the virus’s genetic code to ultimately produce antibodies inside the human body.