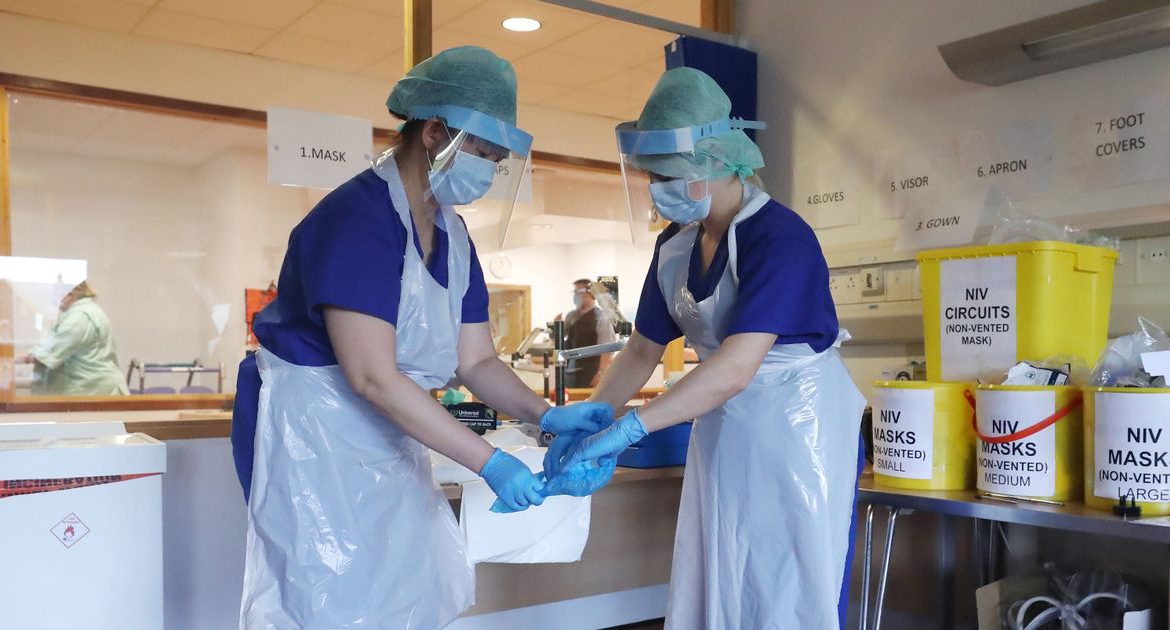 The UK’s coronavirus hospital death toll has increased to 29,735 after 164 more fatalities were reported in 24 hours – the second-lowest daily rise on a Sunday since the lockdown started.

England had 147 new fatalities, Scotland reported nine, Wales had seven and Northern Ireland recorded one as the number of hospital deaths continued to trend downwards.

Only five new deaths were reported in London, one of the lowest daily increases in the capital in weeks.

The Department of Health reported 644 deaths on April 5 and 214 on March 29 – the first two Sundays after the lockdown began.

Nurses on the Covid-19 recovery ward at the Mater Hospital in Belfast
(Image: PA)

The latest figures came as a growing number of Tory MPs joined calls for Dominic Cummings to resign or be sacked by Boris Johnson for breaching the Covid-19 lockdown rules he helped to create.

The Department of Health’s official Covid-19 death toll, which includes care homes, will be updated later. It stood at 36,675 on Saturday, but the true toll is higher than 45,000, according to the latest available data based on death certificates mentioning coronavirus.

NHS England has announced 147 new deaths of people who tested positive for Covid-19, bringing the total number of confirmed reported deaths in hospitals in England to 25,691.

The breakdown by region is as follows:

Of the 147 new deaths announced on Sunday:

The figures also show 49 of the new deaths took place between May 1 and 20, 16 were in April, and the remaining two occurred in March with the earliest new death on March 13.

The figures published today by NHS England show April 8 continues to have the highest number for the most hospital deaths on a single day, with a current total of 891.

A total of 2,270 patients have died in Scotland after testing positive for coronavirus, a rise of nine from 2,261 on Saturday, according to the Scottish Government.

The rise and fall of coronavirus deaths in hospitals in England
(Image: Press Association Images)

There are 845 patients in hospital who have tested positive for Covid-19, up four from 841 on Saturday.

Meanwhile, the Prime Minister is standing by Mr Cummings, his chief aide, who travelled more than 250 miles from London to his parents’ house in Durham with his wife, journalist Mary Wakefield, and four-year-old son.

Police visited the Durham home on March 31 – just days after the adviser developed Covid-19 symptoms – amid complaints that an individual at the property had made the long journey despite the lockdown.

Witnesses told the Mirror and Guardian they saw Mr Cummings, 48, and a young boy outside the house on April 5 when he was said to be self-isolating.

He was seen back at work in the capital on April 14.

But the Sunday Mirror and Observer reported allegations that Mr Cummings had broken the lockdown again by making a second trip to Durham, where walkers say they spotted him in Houghall Woods on April 19.

As he left his London home to head to Downing Street on Sunday morning, a journalist asked Mr Cummings if he had returned to Durham in mid-April.

The aide, who was already claimed he did nothing wrong, replied: “No, I did not.”

Labour has called on Mr Johnson to come to Sunday’s press conference and “answer questions” about what he knew about his chief adviser’s actions.

Shadow home secretary Nick Thomas-Symonds said Labour was asking for an urgent investigation by the Cabinet Office on the matter, describing it as an “extraordinarily serious situation”.

The lockdown has been eased to allow people to go swimming
(Image: Getty Images)

The matter “is now an issue of Boris Johnson’s judgment and integrity”, according to the SNP’s Westminster deputy leader.

Kirsty Blackman spoke out as a number of Tory MPs broke ranks on Sunday morning to criticise the Prime Minister’s top aide and call for him “to go”.

In other developments, a Sunday Times investigation has suggested the Government’s delay in locking down the country may have worsened the peak and been responsible for the UK suffering Europe’s worst death toll.

The study found that infections soared by about 1.3 million in the nine days before the lockdown was announced by Mr Johnson on March 23.

Transport Secretary Grant Shapps insisted that the Government is sticking to its plan to reopen primary schools to more students on June 1.

Teachers and union leaders have called for the reopening to be pushed back amid concerns about safety and the difficulty of getting young children to social distance.

But Mr Shapps told Sky News that the Government has no intention of delaying the reopening of schools in England to children in Reception, Year 1 and Year 6 on June 1.

It was a car crash interview as he faced questions about Mr Cummings.

People stand on a cliff top at Durdle Door in Dorset
(Image: AFP via Getty Images)

The Prime Minister is said to be planning to ease the lockdown in June by allowing market stalls and car showrooms to reopen and garden parties to resume.

He is also keen to reopen outdoor areas at National Trust parks and some non-essential shops, the Sun reported.

A split three-day week with workers split into “A teams” and “B teams” has been proposed as part of the economic recovery from the coronavirus crisis.

The Royal Society for the encouragement of Arts, Manufactures and Commerce (RSA) is suggesting that firms separate their staff into two groups.

In a typical office, one team could work Monday to Wednesday and the second group could work Thursday to Saturday, the independent charity suggested.

Anyone in public spaces “should wear a mask”, according to the president of the Royal Society.

He said: “I think anyone in public spaces should wear a mask because it’s simply another tool to reduce the possibility of infections.

“I don’t think masks are be all end all, you have to think of it as one leg in a multi-legged stool that holds up prevention of transmission.”

Asked if teachers should wear masks, Dr Ramakrishnan said: “If they are socially distanced and there are all these other measures in place, where their use is not necessary, that is a policy decision, that’s not for a scientist like me to say.

“My view is that wherever social distancing is not possible, we must regularly wash our hands and I think it would be a good idea to wear masks.”

A number of councils have urged people to stay away from beaches and other beauty spots that are likely to be crowded as temperatures rise to 26C in parts of the UK on bank holiday Monday.

Don't Miss it US coronavirus: As Americans flock to beaches and parks, some states see surges in new coronavirus cases
Up Next ‘Be caring’: Doctor makes emotional plea after Toronto park crowded amid COVID-19