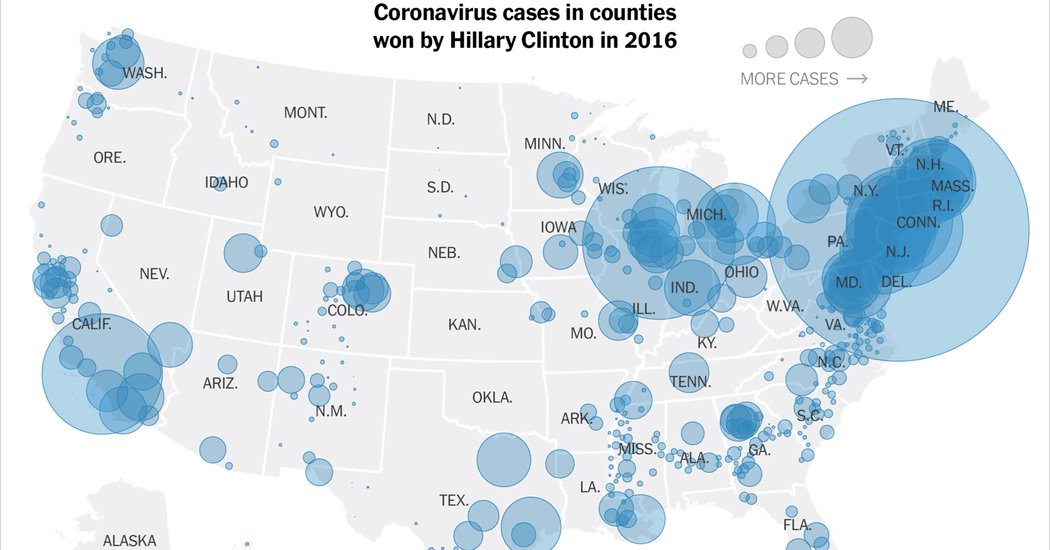 The staggering American death toll from the coronavirus, now approaching 100,000, has touched every part of the country, but the losses have been especially acute along its coasts, in its major cities, across the industrial Midwest, and in New York City.

The devastation, in other words, has been disproportionately felt in blue America, which helps explain why people on opposing sides of a partisan divide that has intensified in the past two decades are thinking about the virus differently. It is not just that Democrats and Republicans disagree on how to reopen businesses, schools and the country as a whole. Beyond perception, beyond ideology, there are starkly different realities for red and blue America right now.

Democrats are far more likely to live in counties where the virus has ravaged the community, while Republicans are more likely to live in counties that have been relatively unscathed by the illness, though they are paying an economic price. Counties won by President Trump in 2016 have reported just 27 percent of the virus infections and 21 percent of the deaths — even though 45 percent of Americans live in these communities, a New York Times analysis has found.

The very real difference in death rates has helped fuel deep disagreement over the dangers of the pandemic and how the country should proceed. Right-wing media, which moved swiftly from downplaying the severity of the crisis to calling it a Democratic plot to bring down the president, has exacerbated the rift. And even as the nation’s top medical experts note the danger of easing restrictions, communities across the country are doing so, creating a patchwork of regulations, often along ideological lines.

Why has the virus slammed some parts of the country so much harder than others? Part of the answer is population density. Nearly a third of Americans live in one of the 100 most densely populated counties in the United States — urban communities and adjacent suburbs — and it is there the virus has taken its greatest toll, with an infection rate three times as high as the rest of the nation and a death rate four times as high.

But the divide in infections has been exacerbated by the path the virus has taken through the nation, which is not always connected to density. In some parts of red America, cities have been virtually unscathed and the sparsely populated outlying areas have been hardest hit. Researchers have also found links between the virus’s effects and age, race and the weather, and have noted that some of the densest cities globally have not been hit as hard.

If seeing is believing, the infection has simply come to some areas of the country on a far different scale than others. As of Friday, Alabama had experienced 11 deaths per 100,000 residents and New Jersey had lost 122 per 100,000. Both states have had a huge spike in unemployment claims.

Texas, solidly Republican territory and the second most populous state in the nation, had one of the country’s hottest economies before the outbreak. The state’s biggest cities have so far escaped the worst of the damage. More than 200 metro areas in the United States have higher infection rates than both Dallas and Houston, which may explain why Texas residents are particularly frustrated by the shutdown.

“The cure is worse than the disease, no doubt,” said Mark Henry, a Republican who oversees the Galveston County government in southeast Texas. “There are businesses that were shut down that are never going to open again.”

Amid the pandemic, there are densely populated red counties near major cities with high infection rates — Suffolk County in New York, Jefferson Parrish in Louisiana, and Monmouth County in New Jersey, for example.

But those are true outliers.

A recent spate of outbreaks in meat plants, prisons and nursing homes has created hot spots in 245 counties that supported Mr. Trump, double the number at the beginning of the month. Some of those outbreaks are hitting subsets of the population that historically have not voted for Republicans. In Iowa, for example, Latinos make up 6 percent of the population but nearly a third of those infected. The population is 4 percent black, but 12 percent of those infected are black.

Over all, African-Americans and Latinos have had higher infection and death rates from the virus, and are far more likely to identify as Democrats than as Republicans.

Several companies have studied social distancing metrics based on anonymized cellphone location data, including the mobility research firms Unacast and Descartes Labs. While the companies do not break down findings by political party, the underlying data they collect shows less social distancing in counties that supported Mr. Trump than in those that supported Hillary Clinton.

Rural and exurban county residents, who tend to favor Republicans, do have to travel more for essential services and are less likely to have jobs that allow for working from home. Yet even in more densely populated suburban areas, there was less evidence of social distancing in counties that voted for Mr. Trump.

Matthew Gentzkow, a Stanford University economist who is leading a group of researchers tracking partisanship in the virus response, said his team initially thought that a health crisis would minimize differences — assuming that people who disagree over taxes or guns would agree about a pandemic. But instead they found that Republicans were more skeptical about the effectiveness of social distancing than Democrats and have been traveling more outside their homes.

“We initially saw partisanship and thought maybe by the time we looked at the data it would be gone,” Dr. Gentzkow said. “But it turns out that no, this is pretty serious and what we see is that the gap got bigger and bigger. These are real belief differences that should have us really concerned.”

Public opinion polls do show widespread support for stay-at-home orders, but also indicate that Republicans are less likely to see the virus as a significant threat to their health. Some skepticism around the impact of the pandemic can be traced to a distrust of the government that has grown among conservatives in the last decade, according to Arlie Hochschild, a sociologist at the University of California, Berkeley, and the author of a 2016 book about the American right called “Strangers in Their Own Land.”

“In the absence of trust, you just believe your eyes and the information that you see in your Facebook feed,” she said.

The experience of residents in Texas underscores how much direct evidence of the virus’s toll has shaped how people view the measures taken to mitigate it.

At the onset of the crisis, Gov. Greg Abbott, a Republican, tried to appeal to both sides of the political spectrum, allowing local governments to make their own decisions until Texas became one of the last states to issue stay-at-home orders and one of the first to roll them back last month.

In Hardin County in southeast Texas, where the population is about 57,000, there have been just 125 cases and five deaths. Kent Batman, 60, the county Republican chairman, who has spent his life in the region, said he had heard of only two fatalities, both of which he dismissed as anomalies.

To Mr. Batman, like many other Republicans in East Texas, the health crisis has felt far away, like a big city plague. “We’re not New Orleans, we’re just not like that,” he said.

Interviews with dozens of Republicans in southeast Texas and other parts of the country over the past month found a pervasive it’s-not-coming-for-my-neighborhood attitude, with many seeing themselves as a world apart from the regions that have been overwhelmed by the virus. They are enthusiastic backers of rolling back restrictions not just as a way to spur the economy, but also based on the belief that individuals should make their own decisions about risk. They dismiss factual reports from the news media as exaggerated and trying to incite panic, because the reports don’t align with their own experience.

Toward the end of March, Judy Nichols, 60, began monitoring charts daily to see how many people near her had the virus. She lives in Jefferson County, not far from Beaumont, and serves as the chair of the county Republican Party. After two weeks, she stopped keeping tabs on the numbers as her worry subsided.

Over the past several weeks, Ms. Nichols said, she has felt like the winner of a product lottery. She owns several Papa John’s pizza franchises, and business has increased nearly 80 percent — pizza in a time of anxiety seeming to be one thing many people can agree on. But nearly everyone she knows is struggling to pay the bills.

On the other side of the partisan divide in Texas, Lina Hidalgo, a Democrat and the top elected official in Harris County, which includes Houston, put in place stay-at-home orders before the governor did in March. Last week, she extended her “stay home, work safe” guidelines until June 10.

She is concerned about the economic impact. She just doesn’t see a safe alternative. “When you have a political system, there are going to be attacks,” she said. “But let’s debate the politics when this is over.”

Jim Meadows, a 60-year-old refrigeration parts repairman in Nederland, Texas, who describes himself as an “extreme conservative,” doesn’t think the economic question can be set aside. He is upset by the unemployment and financial devastation, which is clearer to him than what he called “this invisible plague.”

Through his work he has, however, begun taking orders for plexiglass partitions that many businesses around him want to use. He said he was “pandering to the uninformed.”

Rashell Collins Bridle, a 42-year-old mother of five who also lives in Nederland and makes her living selling items on eBay, said a minister she knew had died after contracting the virus. Even so, she said she and her friends were more focused on freedom than on health.

“I guess other people expect us to set our futures on fire to keep their fear warm,” she said. “I think that’s incredibly selfish — if you’re that fearful, then just stay home.”

For Professor Hochschild, who studies division, sentiments like this in a crisis reinforce what she has seen across the country.

“There is an underlying stoicism that was there before the pandemic that is really getting tapped,” she said. “There’s a notion of snowflake liberals who can’t take it, who are too dainty and fragile and not hearty like us.”

On the first weekend that Texas lifted the stay-at-home orders, Ms. Bridle took her family to a state park on the Gulf of Mexico. She said American flags were flying from many cars and trucks on the road “as if it were the Fourth of July.”

She said that if schools open with hefty restrictions on recess or how far desks must be spaced together, she will instead place her daughter in a Christian home school co-op.

And if there is another stay-at-home order this year?

“We probably won’t stand for that again,” she said. “I myself won’t comply. I will never comply with anything else like this ever. ”

Don't Miss it ‘Convincing’ evidence suggests cloth masks may help reduce COVID-19 transmission
Up Next COVID-19 puts 700,000 Australians out of a job in one week | Finance Report