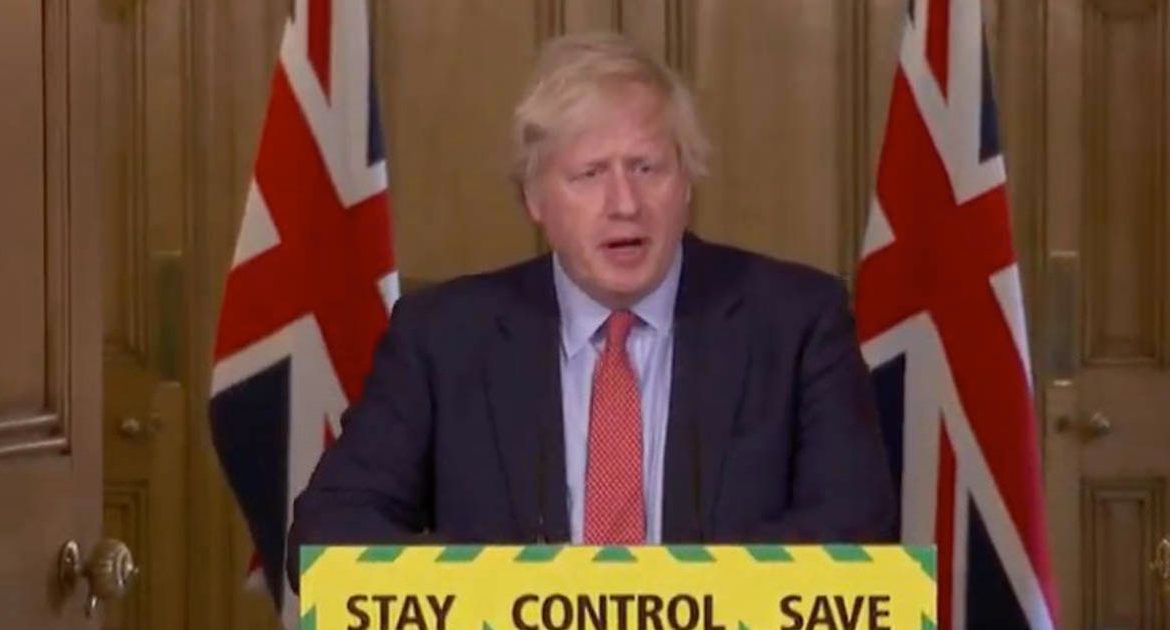 Under-fire Prime Minister Boris Johnson has announced outdoor markets and car showrooms can reopen next week – with other “non essential” shops to follow a fortnight later.

Speaking at today’s Downing Street briefing, he said the first wave of reopenings – where trading can largely be done outside – can happen from June 1.

Shops selling items including clothes, shoes, toys, furniture, books, and electronics will then be allowed to reopen on June 15 – if government safety tests are met.

Social distancing measures must remain in place, the PM said.

He said: “I want people to be confident they can shop safely provided they follow social distancing rules.”

However this will be dependent on key tests, including a drop in new infections and deaths, being met.

It comes as the UK’s confirmed coronavirus death toll rose to 36,914 after a further 121 fatalities were announced today.

For the latest on the coronavirus pandemic, click here

The Prime Minister said: “There are careful but deliberate steps on the road to rebuilding our country.”

He said new guidance was being published for the retail sector “detailing the measures they should take to meet the necessary social distancing and hygiene standards”.

“Shops now have the time to implement this guidance before they reopen,” he said.

“This will ensure there can be no doubt about what steps they should take.”

Businesses have been closed for weeks due to coronavirus restrictions
(Image: Empics Entertainment)

Boris Johnson said the authorities would “have the powers we need to enforce compliance where that is required”.

Helen Dickinson, chief executive of the British Retail Consortium, said: “We welcome the announcement of the Government’s road map for reopening a broader range of shops next month, which provides much needed clarity on the route ahead.

“Safety is the fundamental concern for all retailers and they have been working hard to implement the necessary measures to operate safely over the past weeks.

“Now that we know which shops can open and when, retailers can begin communicating their plans with their workforces and customers. The industry stands ready to play its part in getting the economy moving again.”

Business Secretary Alok Sharma said: “The high street sits at the heart of every community in the country.

“Enabling these businesses to open will be a critical step on the road to rebuilding our economy, and will support millions of jobs across the UK.

“The guidance we have set out today provides a vital framework to get shops open in a way that is safe for everyone.

“It explains how retail workers who are not currently working can go back to work as safely as possible and feel confident in their workplace, and it reassures customers that shops are properly assessing the risks and putting in place measures to protect them.”

Health authorities earlier said 77 people had died in hospitals in England, Scotland, Wales and Northern Ireland – the lowest figure since the lockdown began on March 23.

The announcement was made as the Prime Minister faces pressure to sack his chief advisor Dominic Cummings.

This afternoon Cummings refused to apologise for making a 260 mile journey to Durham from London after his wife developed coronavirus symtoms.

A further 121 coronavirus deaths have been confirmed

Mr Johnson said of the controversy: “Yes of course I do regret the confusion and the anger and the pain that people feel.”

Cummings earlier admitted it was “reasonable to say that other people would have behaved differently” – but said there were exceptional circumstances to justify the trip.

He denied breaking the rules, and claimed he had not broken the “spirit” of the rules, saying: “I did what I thought was the right thing to do.”

Speaking at a grilling in the garden at Downing Street, he said: “I don’t think there’s one rule for other people, as I said I knew what the guidance was, it talks about exceptional circumstances with small children, and I believe I behaved reasonably and legally.”

SNP Westminster leader Ian Blackford MP said Boris Johnson had “no option” but to sack Dominic Cummings, and his failure to do “is a gross failure of leadership”.

Responding to the extraordinary press conference in the Downing Street garden, Mr Blackford said: “What should have been a resignation statement turned out to be a botched PR exercise that changes nothing.

“There was no apology and no contrition from Mr Cummings for his behaviour – and now, following this unrepentant press conference, there are no excuses left for him. “He has done nothing but double down on the double standards he has displayed and which millions of people across the UK are furious about.”