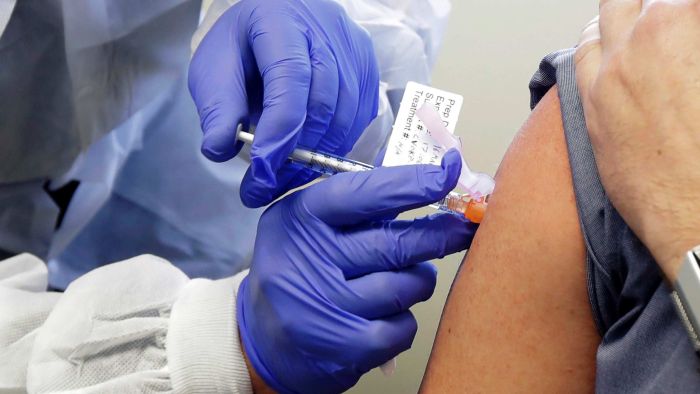 The southern hemisphere’s first human trials of a potential coronavirus vaccine have started in Melbourne, with the program set to expand to Brisbane within a week.

Overseas, Italians are being asked to police social-distancing regulations as the nation tries to get back to normality, while US leaders remain at odds over the use of face masks.

This story will be regularly updated throughout Tuesday.

Australia’s first human trials of a potential COVID-19 vaccine started in Melbourne today, with about 130 people involved in the program.

Clinical research organisation the Nucleus Network will be in charge of the early stages of testing the vaccine NVX-CoV2373, before the trial expands to Brisbane within a week.

Who are the frontrunners in the coronavirus vaccine race?

There are more than 100 coronavirus vaccines in the pipeline and almost a dozen that have made it to humans trials. ABC Health takes a look.

The participants are healthy people between 18 and 59 years old.

Victoria’s Parliamentary Secretary for Medical Research, Frank McGuire, said the trial was a significant step forward in the race for a coronavirus vaccine.

“As the first human trial in the southern hemisphere, and one of only a handful of COVID-19 human trials worldwide, I am delighted Victoria is again at the forefront in leadership and excellence in medical research,” he said in a statement.

The treatment is being developed by US biotech company Novavax and is aimed at enhancing the immune response and stimulating high levels of neutralising antibodies.

Preliminary results are expected in July.

New York Governor Andrew Cuomo has hit out at New Yorkers who have been refusing to wear face masks, saying opposition to the measure is “trivial and nonsensical”.

Democratic presidential candidate Joe Biden was wearing a black mask as he made his first public appearance in more than two months, laying a wreath at a war memorial near his Delaware home.

President Donald Trump, who rarely if ever wears a mask in public, was not wearing one as he honoured fallen troops at Arlington National Cemetery. Vice-President Mike Pence, First Lady Melania Trump and other attendees were also without masks.

Most regions in the country have mandated the use of face masks when in public.

Mr Cuomo said he was baffled by those who gathered without wearing them.

“Why you wouldn’t use it? There’s no legitimate, rational explanation,” he said.

“‘Well, I don’t like the way it looks’ — you know what, paint something on the mask.”

On average Italians washed their hands 12 times a day and used hand sanitiser five times a day during the country’s coronavirus lockdown, according to a survey published by the country’s national statistics bureau.

The poll, conducted from April 5-21 at the height of Italy’s epidemic, found that some 72 per cent of respondents said that on “an average day” they did not leave their home.

Despite being confined at home, three-quarters of Italians said their relations with family members remained positive during the restrictions, with just 8 per cent describing them negatively.

Almost 33,000 Italians have died from COVID-19, the respiratory disease caused by coronavirus, since its outbreak emerged on February 21, the world’s third highest reported toll after the United States and Britain.

The lockdown imposed nationwide on March 9 has been gradually lifted since May 4, with bars, restaurants and shops allowed to reopen while observing strict social distancing rules.

As part of the lockdown softening, Italy’s Government will ask some 60,000 citizens to work as volunteers to enforce social distancing rules.

The volunteers were deemed necessary after street gatherings over the weekend sparked an outcry.

TV images over the first post-lockdown weekend showed traffic jams in Naples and crowds in Milan, while the Veneto region published a video with images of patients in intensive care to convince people to comply with security measures.

“Those who fuel night life are betraying the sacrifices of millions of Italians,” Regional Affairs Minister Francesco Boccia said on Monday.

The US embassy in Canberra has apologised to the Australian Government over a State Department document used by a Sydney newspaper to link the coronavirus to a Chinese government laboratory.

The article was described by the Saturday Telegraph as a research dossier linked to the world’s most powerful intelligence sharing group, the Five Eyes alliance.

But the document, described as a non-paper, actually contained no new evidence linking the laboratory to the outbreak and instead relied on publicly available news.

The Australian National University’s Rory Medcalf said the document was portrayed to be more than it was.

“I think the … concern I would have here is that it’s essentially a speculative document somehow dressed up to be a highly authoritative piece of intelligence, which from all appearances it doesn’t seem to be,” he said.

He said it was a diplomatic document intended to have non-official status so as to be “almost deniable”.

Boris Johnson’s right-hand man has no regrets over lockdown row Mr Cummings has repeatedly said he and his wife had not breached lockdown measures.(AP: Jonathan Brady, pool)

Mr Cummings, one of the key figures in the 2016 Brexit campaign, came under pressure when newspapers reported he had travelled from London to north-east England at the end of March, when his wife was ill with COVID-19 symptoms during a nationwide lockdown.

In a pre-prepared statement at the Rose Garden of 10 Downing Street, the powerful adviser said he did not regret what he did, and had never considered resigning from his position.

“I’m not surprised that a lot of people are very angry,” Mr Cummings said.

At a press conference on Monday evening (local time), Mr Johnson refused to give Mr Cummings his “unconditional backing” when asked by a reporter on the advisor’s status, but added he thought the aide had acted “legally and reasonably”.

In recent days, there have been calls from within the Conservative Party for the aide to be dismissed.

With a death toll of around 43,000, the UK is the worst-hit country in Europe, with the Johnson Government under pressure over its handling of the pandemic.

Spain has urged tourists return from July as one of Europe’s strictest lockdowns eased, though tourism businesses were sceptical about salvaging the summer season.

The world’s second-most visited nation closed its doors and beaches in March to handle the COVID-19 pandemic, imposing a two-week quarantine on overseas visitors.

But that requirement will be lifted from July 1, a Government statement said.

“The worst is behind us,” Foreign Minister Arancha Gonzalez Laya tweeted with emojis of a bikini, sunglasses and a suitcase.

Spain normally draws 80 million people a year with tourism accounting for over 12 per cent of gross domestic product and an even bigger share of jobs, so the summer season is crucial to possibilities of mitigating a looming recession.

The Dutch agriculture ministry says it has found what it believes to be a second case of a human becoming infected with coronavirus after coming into contact with a mink that had the virus.

In a letter to parliament, Minister Carola Schouten repeated that the country’s National Institute for Health believes the risk of animal-to-human transmission of the virus outside the farms on which they are kept is “negligible”.

On April 26 the Dutch Government reported mink on a farm in the south of the country had been found to have the disease, prompting a wider investigation of such farms, where mink are bred for their fur.

The German Government has agreed to bailout Lufthansa to the tune of 9 billion euro ($15 billion), which gives Berlin a 20 per cent stake in the airline and a veto in the event of a hostile bid for the carrier.

Conditions of the deal include the waiver of future dividend payments and limits on management pay, Lufthansa said, adding the Government would also fill two seats on its supervisory board, with one becoming a member of the audit committee.

This constitutes the largest German corporate rescue since the coronavirus pandemic began, as the airline reels from the pandemic-induced downturn in global travel.

German Governments have spent decades offloading stakes in companies, but remains a large shareholder in former state monopolies such as Deutsche Post and Deutsche Telekom.

Berlin also still has a 15 per cent holding in Commerzbank, which it took on during the global financial crisis of 2008.

The Government advised it was planning to sell its stake in Lufthansa by 2023.

Don't Miss it Boris Johnson confirms reopening of shops from June 1 as coronavirus lockdown eased
Up Next Can kids get the coronavirus? What we know about the Kawasaki-like disease linked to COVID-19