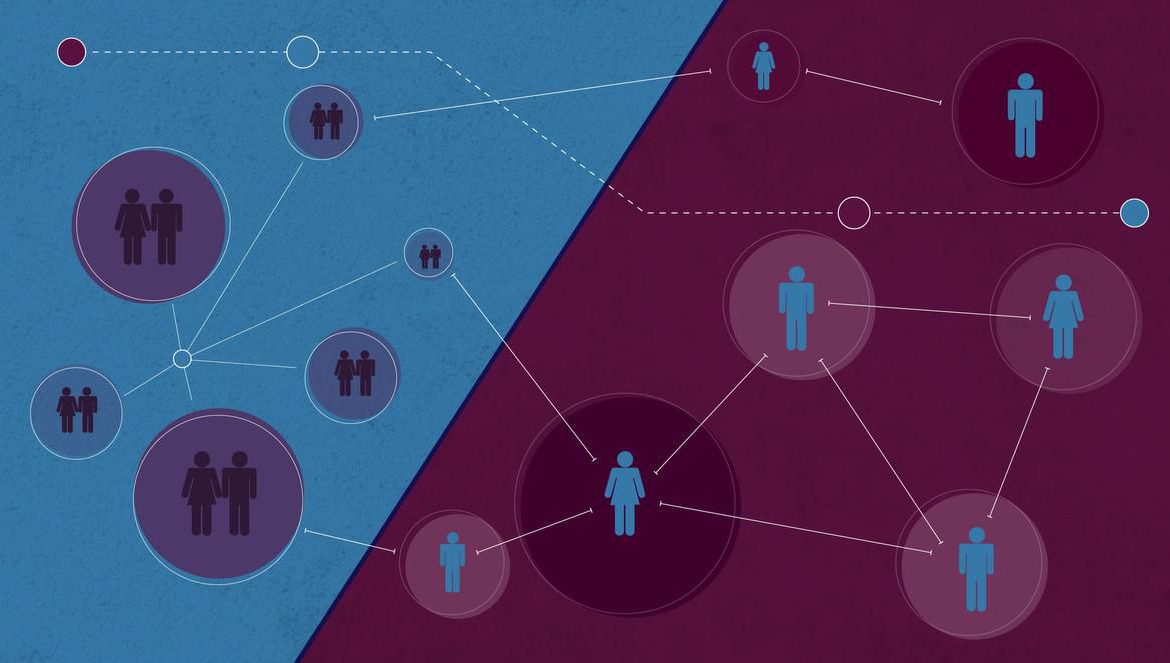 In early May, Gideon Lichfield, the editor-in-chief for the MIT Technology Review, announced online that he was going to break his isolation for the first time in two months.

And he was going to do it by joining up with another household.

“Effectively we’ll become an extended family, free to visit each other’s homes, share meals, and — yes! — hug,” wrote Lichfield, who resides in Cambridge, Massachusetts. “I live alone, but I’m a very social person, and the mere thought of being able to sit next to someone on a couch feels like finding water after days wandering in a desert.”

The measure adopted by Lichfield has been referred to as a “quaranteam” or “double-bubbling” and, although his was a personal decision, jurisdictions around the world — including some provinces in Canada — have officially promoted it as a way to provide limited social interaction during the pandemic.

New Brunswick and Newfoundland said near the end of April that households may choose to double up as a way to decrease social isolation.

Photos of families embracing each other in those provinces flooded onto social media in the ensuing days, according to media reports.

Countries such as Belgium and the U.K. have also looked at restricted social bubbles, where people are allowed to have contact with friends outside their households and no one else, which has been studied by Oxford University sociologist Per Block as a way to reintroduce socialization.

In British Columbia and Ontario though, officials are still promoting social distancing, limiting public gatherings to five or six people respectively, although the scenes from Trinity Bellwoods Park in Toronto — where thousands gathered Saturday — say otherwise.

It will be days before we can understand how the social intermingling of a large group — which has the potential to be a superspreader event and which the city and province have tried to avoid at all costs — will affect the transmission of coronavirus in Toronto.

“Given the mean incubation period of five days, I would expect us to see an effect of the gatherings in about one week,” said epidemiologist Jeff Kwong, a family doctor and a professor at U of T’s Dalla Lana School of Public Health. “Hopefully, with the expansion of testing eligibility, people will get tested soon after symptom onset. But it still takes a day from date of testing to reporting of results.”

Experts say transmission was bound to increase as jurisdictions in Canada open up.

No one knows currently if combining households, or restrictive social bubbles, is a better way to ease out of isolation than social distancing.

Chris Bauch, a professor and a university research chair in the department of applied mathematics at the University of Waterloo, said that expanded social bubbles — meaning you socialize with people outside of your immediate household or bubble — are a fairly new concept and it’s difficult to determine if they would work.

“I think it’s hard for us to quantify how much risk is introduced by bubbling,” said Bauch, who hasn’t seen a model that can predict what that would look like in Ontario.

Currently, if we go out grocery shopping and become infected, the risk is that we spread it to our immediate household.

“But in a bubbling context, if you happen to get infected in the supermarket, you can spread it not only to your family but very quickly to the people you are bubbling with. So you’ve doubled the exposure to the virus,” said Bauch. And that “can still create these continuous chains of transmission in the population, from supermarket to the bubble, from supermarket back to some other bubble.”

Block’s modelling, which was done in the U.K., says that “while social distancing measures clearly do flatten the curve, strategic reduction of contact can strongly increase their efficiency, introducing the possibility of allowing some social contact while keeping risks low.”

Bauch thinks there could be some value in both approaches.

“They’re both ways of trying to give people a release valve on the pressure cooker,” said Bauch. “And maybe they’re really both beneficial in that kind of meta aspect.”

Bauch released a study last week, co-authored by Vadim Karatayev and Madhur Anand from the University of Guelph, that said geography should play a part in how the economy reopens in Ontario because of the variability of per capita COVID-19 infection rates in the province.

That variability is also apparent in the rest of Canada.

New Brunswick and Newfoundland, which are allowing double-bubbling, have 121 and 260 cases respectively as of Monday.

“A lot of it comes down to that,” said Bauch. “Ontario and Quebec are the worst affected provinces. The Maritimes and some of the Prairies have flattened the curve very quickly.

“I think the bubbling is an adaptation, perhaps a justified risk in the case of the Maritimes because they’ve been pretty good with flattening the curve. Perhaps in Ontario we’re not ready for that yet because we still have a lot of activity in lots of parts of the province.”

However, the policy did cause anxiety in families having to choose one set of relatives or friends over another, and resulted in rejection, according to media reports. And the measure wasn’t recommended for people 60 or older with chronic conditions, or other vulnerable populations.

One positive sign in Ontario in recent weeks has been the current reproduction number, which refers to the average number of secondary infections that result from one case of the virus. Mathematical models show it has been below one, said Bauch.

When the number is below one, meaning an infected person passes the virus on to less than one other person, it dies out.

Both Bondy and Bauch say it’s inevitable that the number will start climbing again.

“The question is how much can we tolerate,” said Bondy. “It takes enormous tracking and testing resources to counteract the effect of more social interaction.

“We’ve increased capacity enormously since January, contact tracing and testing. The question is whether it can be sufficient … to keep the reproduction number low.”

Canada managed to drive SARS — Severe Acute Respiratory Syndrome — below one to get rid of the virus, she says.

“It is not optimistic that we will end this one by driving the (reproduction) number below one,” said Bondy. “So the question is how close to one can we keep it so that we don’t have propagation of the epidemic again so that you have that exponential growth of new cases again.”