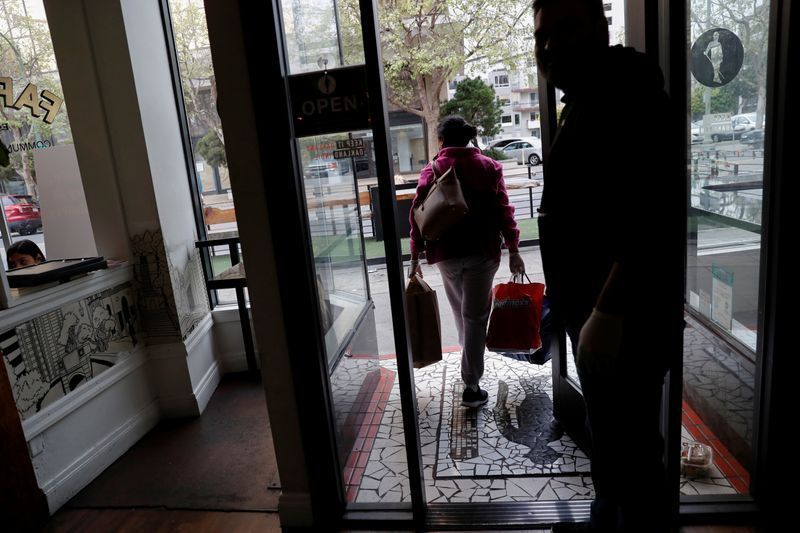 By Ann Saphir and Howard Schneider

SAN FRANCISCO/WASHINGTON (Reuters) – When the U.S. government first rolled out forgivable loans to small businesses in early April under the Paycheck Protection Program, loan officers at Bank of the West in Grapevine, Texas worked nights and weekends to process a tsunami of applications.

But since those first few frantic weeks, demand has “just dried up,” said bank president Cindy Blankenship. On May 15 the bank stopped taking applications for PPP loans.

Nationally the program remains active. But data from the Small Business Administration shows net weekly PPP lending has actually been negative since mid-May, as fewer firms applied for loans, and some borrowers returned funds. https://tmsnrt.rs/2ZuvQvc

All told, the SBA says it had approved $512.2 billion in PPP loans as of May 21. That’s nearly $150 billion less than the $660 billion allocated to the program, which was designed to keep Americans on company payrolls and off unemployment assistance.

Many of Bank of the West’s PPP borrowers haven’t touched their PPP loan deposits, which total $87 million, Blankenship says, partly because they are confused about the terms. “I think it’s a mixture of uncertainty and anxiety and fear, and the uncontrollable factor about employment and rehiring.”

The money left unborrowed and unspent under the program – a flagship of Congress’ $2.9 trillion effort to cushion the economic crush of the coronavirus pandemic – represents a lost opportunity. Businesses were supposed to use it to retain workers, but may have been laying them off instead of tapping the money.

Some 38.6 million people have filed for unemployment insurance since the crisis began, and the unemployment rate is expected to near or surpass the 25% record reached in the Great Depression.

The SBA does not provide estimates of how many jobs have been protected by the 4.4 million loans made to date under the program.

The agency did not respond to Reuters’ requests for comment.

Business owners first saw the program as a lifeline during the coronavirus crisis. They are now worried that confusing and changing rules may keep them from converting the money to a grant, meaning they will need to pay it back.

To ensure forgiveness, for instance, firms need to spend three-quarters of the funds on payroll. But for some firms that doesn’t leave enough to cover overhead. Others don’t have enough work to justify rehiring many of their pre-crisis staff.

A survey by small business lobbying group Main Street Alliance showed 55% of members who were PPP borrowers were worried about loan forgiveness.

There are broader reasons for the program’s loss of popularity that are outside the SBA’s control.

It was designed to cover eight weeks of pay, allowing companies to stay afloat, retain employees, and be ready to quickly restart when pandemic restrictions were eased.

But even as states like Texas reopen, health authorities are limiting capacity at restaurants and retailers, and customers have been slow to return.

Potential borrowers are “uncertain when we are going to reopen, uncertain what the demand will look like, uncertain about use of the program funds,” said Bill Keller, president of Oakland-based Community Bank of the Bay.

Another barrier to PPP use is competing stimulus programs. Workers who lose their jobs due to the virus get an extra $600 weekly through July as part of enhanced unemployment benefits passed in March, netting many service workers more than if they returned to a PPP-subsidized job.

Some companies have opted for the Employee Retention Tax Credit (ERTC), also created by Congress in March, because it provides more certainty than the PPP, says Main Street Alliance’s Sarah Crozier. The ERTC, a refundable tax credit against wages paid, cannot be combined with a PPP loan, and essentially acts like a payroll subsidy.

RETURNED BUT NOT REUSED

Public companies have returned a total of $453 million in PPP loans, according to data compiled by FactSquared.

The returns came after the Treasury Department said large borrowers would be audited and weren’t the intended recipients. About one-fourth of the amount was from hotel group Ashford Inc. and affiliates, which drew heavy criticism for taking the loans.

Those funds haven’t been lent anew, based on SBA data to date. Ashford and its affiliates have laid off about 13,000 since the pandemic began, filings show.

This week Congress will consider bills to ease some of the PPP rules, allowing firms more leeway for using the funds and repaying any that isn’t forgiven.

“They need to make it more enticing – or at least applicable to the people that need it,” Bank of the West’s Blankenship said.