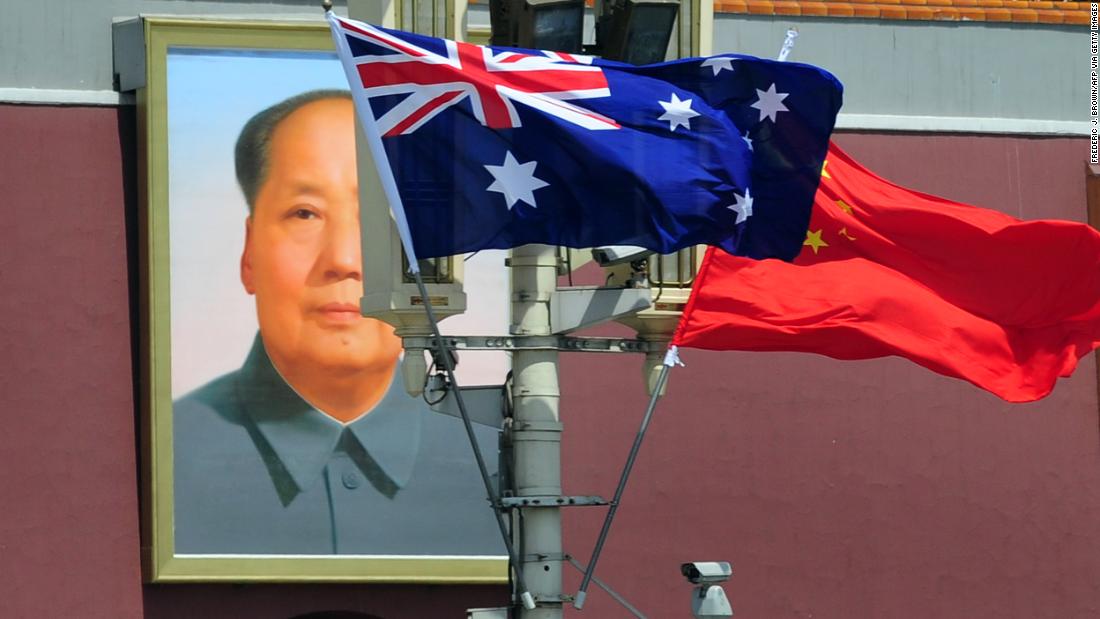 Less than one month later, the campaign to punish Australia appears to be in full swing.

China is Australia’s largest trading partner by far, with total trade between the two countries totaling more than $214 billion in 2018 alone. As Australia faces the very real prospect of a coronavirus-related recession, that economic relationship is more important than ever.

“It’s very hard to see how in the absence of any discussion we can quickly rebuild trust in the relationship,” said Richard McGregor, senior fellow at the Lowy Institute.

Globally, experts say Australia is seen as a test case — can a liberal democracy with close trade ties to the authoritarian regime in Beijing still maintain an independent foreign policy, which will at times be critical of the Chinese Communist Party?

For decades, Canberra has been caught between a rising China, bringing vast economic wealth to Australia, and its own long-standing security ties with the United States.

The vast majority of Australia’s exports to China are raw materials such as iron ore, coal, gold and wool, to feed the country’s rapid economic growth, while it imports large amounts of consumer goods and technical components.Relations between the two sides began to sour in 2017 when Australia introduced sweeping new security legislation designed to crackdown on foreign interference in domestic politics.

Beijing believed the laws were targeted squarely at them and put Australia into a diplomatic deep freeze.

It was in this chilly environment that Payne, Australia’s foreign minister, first called for an investigation into the origins of the coronavirus pandemic on April 19. Soon after, Prime Minister Scott Morrison became the first international leader outside of the United States to call for a formal investigation.

“It would seem entirely reasonable and sensible that the world would want to have an independent assessment of how this all occurred,” Morrison said at a press conference on April 29.

The topic of how the coronavirus began has become increasingly politicized in recent months as Washington and Beijing both try to use it to distract from domestic economic problems.

The calls for an investigation escalated the feud between China and Australia. Ambassador Cheng was summoned by the Australian government and accused of “economic coercion” over his comments on wine and beef exports.When a reporter from an Australian newspaper said at a press briefing in Beijing on April 28 that he had “never heard” remarks as severe as Cheng’s from people in Beijing, foreign ministry spokesman Geng Shuang replied, “Do you want to hear some now?”

Similar comments could be easily found on the Chinese internet, Geng said.

Following the decisions on Australian beef and barley, trade minister Simon Birmingham said on May 13 that Chinese officials had been adamant the restrictions had nothing to do with Australia’s calls for an independent investigation. “We’ve been very clear, we’re not about to change our policy positions under any threats, suggestion, or otherwise of economic coercion,” he told the Australian Broadcasting Corporation. Birmingham and agriculture minister David Littleproud both confirmed that calls to their Chinese counterparts hadn’t been returned.

Experts said the decisions by Beijing were almost certainly retaliation. China expert McGregor said it was likely that Beijing wanted to use Australia to send a message to the world.

“When China wants to punish a country they do it in public so that country and its population clearly knows there’s a price for crossing China,” he said.

While relations between Canberra and Beijing deteriorate, debate is growing inside Australia over whether the country needs to push back harder against the Chinese government.

In late April, Andrew Hastie, a backbencher in the ruling Liberal National Coalition government, posted a petition to his website calling for the government to “take action on Australian sovereignty.”

“The coronavirus pandemic has exposed the true cost of relying too heavily on an authoritarian regime like China for our economic security and prosperity,” said the petition. Hastie is also the Chair of Australia’s Parliamentary Joint Committee on Intelligence and Security.

But former Australian Foreign Minister Bob Carr said that Canberra was risking economic ties with Beijing in what appeared to be an attempt to solidify its security relationship with Washington. “We’ve just positioned ourselves out in front of any US ally in appearing to conduct an adversarial policy towards China,” said Carr.

He said there was a push from within Australia to act as “America’s deputy sheriff,” in the mistaken belief that tighter US ties would protect the country from aggressive moves by Beijing.

“There is a mad view taking hold in Canberra that if China inflicts pain on us, our job is to dutifully bear it and to present ourselves as self-sacrificing allies of the US, doing our master’s bidding,” Carr added.

The hits to Australia’s agricultural exports come as the Chinese government is attempting to find billions of dollars in new imports from the United States as part of a phase one deal that followed a truce in the US-China trade war.

“It’s very, very likely that American exporters who farm produce will fill the gap that the exclusion of Australian farmers is going to cause,” Carr said.

There are still many areas of trade with China that remain unaffected by the tensions, including the multibillion-dollar iron ore trade, which is desperately needed by Beijing for its ambitious infrastructure program.

But already there are signs that there could be more pain to come. Despite China agreeing to a coronavirus investigation on Monday at the World Health Assembly, relations with Australia have not improved. In an article Wednesday, Bloomberg quoted sources saying that Chinese officials had drawn up a list of potential future targets for retaliation, including Australian seafood, oatmeal and fruit.

Carr called for greater diplomacy between Australia and China to help rebuild the damaged relationship, but another former Australian foreign minister said it was important for Canberra to make a stand on this issue.

“My whole experience with China is that they will attempt to bully you as hard as they can … I’m sorry about the barley farmers but at least we haven’t caved in and been bullied by them and we’ve got the investigation that we wanted,” he said.

Whatever Canberra’s decision, China expert McGregor said that Beijing needs to be careful about how far it pushes Australia, especially at a time when countries in Europe and Asia are rethinking just how close they want to be to China.

“If they see China punishing a democracy simply for making an unremarkable point about the need for an inquiry into what happened with the virus, then that will make many of them wonder about how they should manage relations with China as well,” he said.

Don't Miss it Summer heat, humidity will be a problem when wearing COVID-19 masks outdoors: experts – National
Up Next Coronavirus: China bans citizens from leaving their homes | DW News