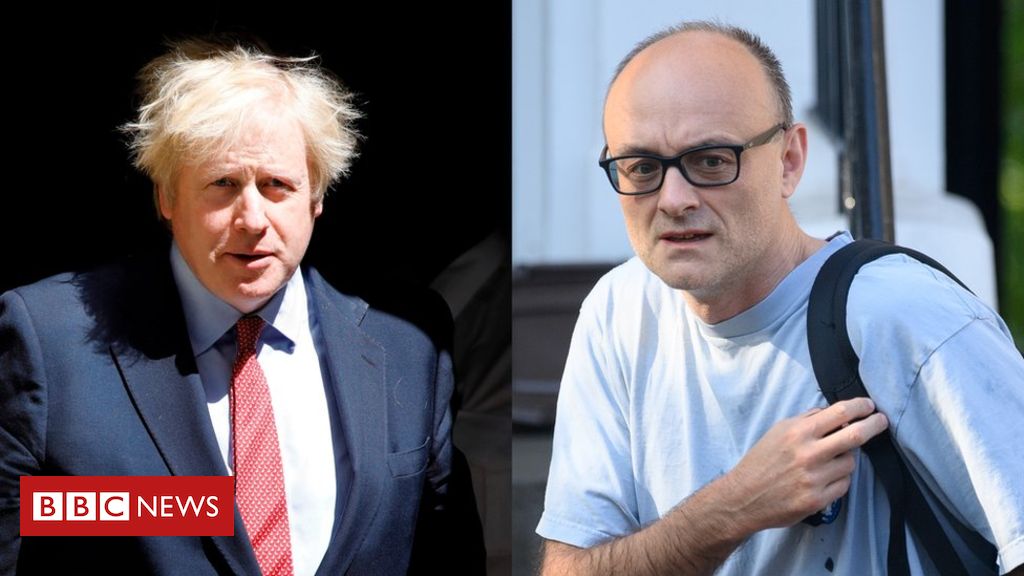 Boris Johnson will be questioned by senior MPs later amid continued calls for his top adviser to resign.

The prime minister will appear before the Commons Liaison Committee for 90 minutes, during which he will be asked about Dominic Cummings’ controversial lockdown trip to County Durham.

More than 35 Tory MPs have called for Mr Cummings to resign or be fired after his 260-mile journey came to light.

But cabinet minister Robert Jenrick told the BBC it was “time to move on”.

Wednesday’s session, due to begin at 16.00 BST, will be the first time that the PM has faced questions from MPs since the allegations against Mr Cummings emerged at the end of last week.

The bulk of the hearing will be devoted to the government’s handling of the coronavirus pandemic, including testing, PPE, schools and the economy, with the section on Mr Cummings’ actions due to last less than 30 minutes.

Mr Cummings’ decision in March to drive from his London home to his parents’ farm in County Durham with his wife – who had coronavirus symptoms – and his son has dominated the headlines since the story broke on Friday night.

The PM’s chief adviser gave a news conference on Monday, explaining that Mr Cummings decided to make the trip because he felt it would be better to self-isolate in a place where he had options for childcare if required.

He has received the continued support of the prime minister, who said that his aide had acted legally and with integrity.

But cross-party critics have called for Mr Cummings to leave No 10, while junior minister Douglas Ross resigned in protest.

Mr Cummings has defended his trip to County Durham during lockdown

Sir Bob Neill, Tory MP for Bromley and Chislehurst, is among those calling for Mr Cummings to resign, saying the row had become a “distraction”.

He told BBC Radio 4’s Today programme Mr Cummings had “real talents and abilities” but “no adviser is indispensable”.

However, in a note to fellow MPs, Danny Kruger, former political secretary to Mr Johnson and now Tory MP for Devizes, said demanding the resignation of Mr Cummings was “basically declaring no confidence in the PM”.

In response, Sir Bob said he didn’t accept this, adding: “This is actually about us wanting to help the prime minister to get back to be able to focus on the key task of pulling the country together.”

But Communities Secretary Robert Jenrick said Mr Cummings’s actions were “within the law” and he retained the backing of the cabinet.

“It doesn’t look as if any of the guidelines or the rules have been broken,” he told BBC Breakfast.

“And so my view is that now we accept that and we move on because there are many many more important issues that we need to be talking about….like the track and trace system, for example, that’s going to have a big impact upon millions of people’s lives.”

Mr Jenrick also insisted that parents who have been fined for breaches of the lockdown would not have their penalties reviewed if they could prove they were acting in the best interests of their children.

Health Secretary Matt Hancock suggested on Tuesday the issue might be looked at in light of public anger over the issue and Mr Cummings’s explanation for his own actions.

But Mr Jenrick said there was not going to be a formal review, as it was up to the police to decide.

What is the liaison committee?

Sir Bernard Jenkin’s choice to head the committee was controversial

The Liaison Committee – a panel of 37 MPs who chair various select committees – is the only Commons committee that can question the prime minister.

This will be Mr Johnson’s first appearance since he became PM last July.

Among those set to question the PM will be former Tory cabinet ministers Jeremy Hunt and Karen Bradley; ex-Labour ministers Hilary Benn and Yvette Cooper; and the SNP’s Pete Wishart.

Sir Bernard was appointed to his new role last week even though he no longer chairs a committee of his own and despite a cross-party attempt to block his appointment.

The MP, who previously chaired the Public Administration Committee, was a leading member, alongside Mr Johnson, of the 2016 campaign to get Britain out of the EU.

Conservative Tobias Ellwood – who chairs the defence select committee – appeared unhappy on Twitter he was not on the list of MPs asked to appear, and was retweeted by fellow Tory Tom Tugendhat, who chairs the foreign affairs committee.

But a statement from Sir Bernard said the whole Liaison Committee had “unanimously agreed” the members of the working group who would be joining him for the session.

Don't Miss it 20 April: Coronavirus data analysis from Australia and around the world | ABC News
Up Next Coronavirus update: Kenya rolls out testing in its biggest slum, where being virus-free helps you get a job