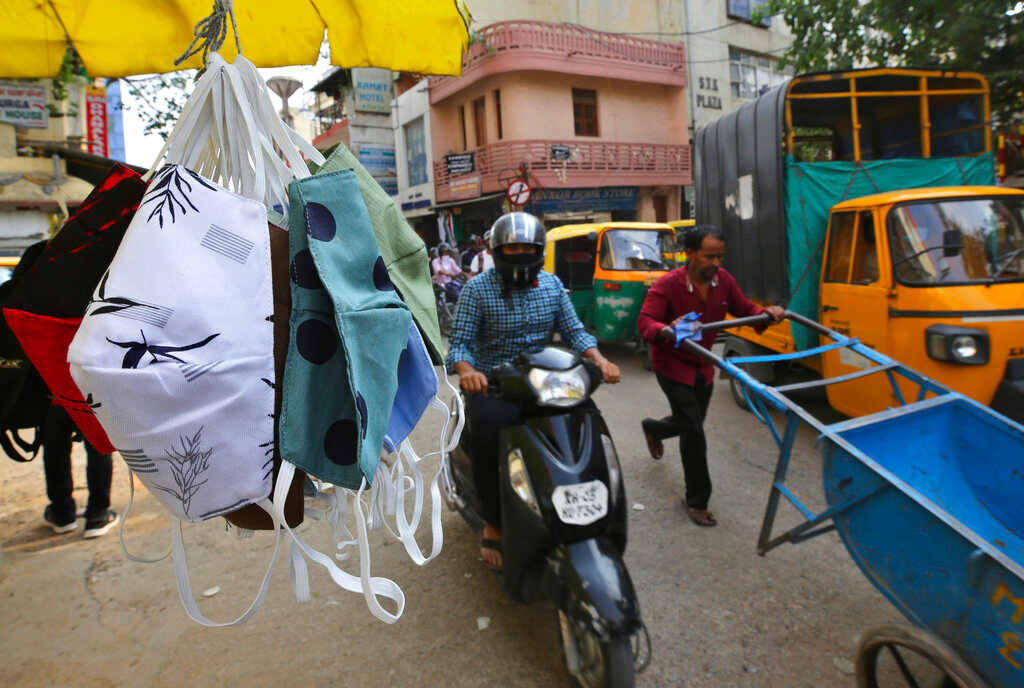 Coronavirus Outbreak LATEST Updates: Two SpiceJet passengers who travelled from Ahmedabad to Guwahati via Delhi on Monday have tested positive for COVID-19, the airline said on Wednesday.

“Two passengers who had travelled with SpiceJet from Ahmedabad to Guwahati on May 25 have tested positive for COVID-19. The passengers had travelled on SG-8194 (Ahmedabad-Delhi) and SG-8152 (Delhi-Guwahati),” an airline spokesperson said.

“COVID tests were conducted at Guwahati after landing and the passengers were quarantined. The test reports came on May 27. The operating crew has been quarantined and SpiceJet is coordinating with government agencies in notifying other passengers who had travelled with them,” the airline said.

This is the sixth day that the country has registered more than 6,000 new cases. However, the Union health ministry said that there have been “multiple gains” from the lockdown and the most important of them is that it has “decelerated the pace” of the spread of COVID-19.

Confirmed cases in India climbed to 1,51,767 on Wednesday. AP

Of the 170 deaths reported since Tuesday morning, 97 were in Maharashtra, 27 in Gujarat, 12 in Delhi, nine in Tamil Nadu, five each in Madhya Pradesh, Uttar Pradesh and West Bengal, three in Rajasthan and one each in Andhra Pradesh, Chandigarh, Haryana, Jammu and Kashmir, Kerala, Telangana and Uttarakhand.

Of the total 4,337 fatalities, Maharashtra accounts for the highest (1,792) deaths in the country, followed by Gujarat with 915 deaths, Madhya Pradesh with 305, Delhi with 288, West Bengal with 283, Rajasthan and Uttar Pradesh with 170 each, Tamil Nadu with 127 and Andhra Pradesh and Telangana with 57 deaths each.

“A total of 4,013 cases are being reassigned to states,” the ministry said on its website, adding that its “figures are being reconciled with the ICMR”.

However, since the morning update given by the Union health ministry, many states have reported an increases in both cases and fatalities. Delhi recorded 792 fresh cases pushing the total past 15,000. The National Capital also recorded 15 deaths, taking the toll from the novel coronavirus to 303.

The state government, however, said that it is hoping to bring the numers under control by next week.

“The cases which are rising are in the same containment zones with high densities. There aren’t new areas from where cases are coming up. And even in these containment areas, the numbers are slowly decreasing. We should be able to bring the numbers under control by next week,” said Maharashtra minister Jayant Patil on Wednesday, according to News18.

Tamil Nadu also saw a sharp rise in cases as 817 more people tested positive, including 138 returnees from Maharashtra while six patients succumbed to the viral infection on Wednesday. The infection count in the state is now 18,545 while a total of 133 persons have died due to the disease.

The number of cases continued to rise in Kerala as well with the return of people from various states as well from abroad. The state which had been lauded for controlling the spread of the contagion reported 40 new cases on Wednesday, of which 37  were returnees, taking the overall tally 1,003. Presently, 445 people are undergoing treatment in various hospitals in the state and over 1.7 lakh are under observation, PTI quotes Kerala chief minister Pinarayi Vijayan as saying.

Tripura also reported 23 new cases and officials said that the majority of the recent cases have been detected among people returning from Maharashtra, Karnataka, Tamil Nadu, West Bengal and other states.

In Madhya Pradesh, the Raj Bhavan, the residence of the state governor, was declared as a containment zone after six persons living on the campus tested positive for the viral infection.

Raj Bhavan sources told PTI that after the first case of COVID-19 was found at the Raj Bhavan a couple of days back, the sample of Governor Lalji Tadon was also collected for testing.

Meanwhile, officials in the hill state Uttarakhand said that the doubling rate of coronavirus cases has worsened and the number of infections has jumped nearly five times in this period due to the influx of people from outside the state.

Meanwhile, the Union health ministry in a statement said the lockdown had contributed to the slowing of the spread of the virus in the country.

“Lockdown has garnered multiple gains, and primarily among them is that it has decelerated the pace of spread of the disease,” the ministry said.

Estimates made by the Ministry of Statistics and Programme Implementation showed that a large number of deaths and cases have been averted, it said, adding that health infrastructure also had been strengthened.

“Health infrastructure required for COVID-19 management was ramped up during the lockdown. As on 27 May, 930 dedicated COVID hospitals with 1,58,747 isolation beds, 20,355 ICU beds and 69,076 oxygen supported beds are available,” the statement said.

The Centre has also provided 113.58 lakh N-95 masks and 89.84 lakh Personal Protective Equipment (PPEs) to the states, union territories and central Institutions, the ministry said, adding that the testing capacity has increased in the country through 435 government laboratories and 189 private laboratories (total of 624 labs).

However, the impacts of the lockdown on the economy, particularly on the revenues earned by states continued to be evident, with the Chhattisgarh deciding to undertake various austerity measures.

“The state government has taken several important decisions to cut its expenditures and ensure optimal utilisation of resources available for development-oriented works in the backdrop of fall in revenue collection due to the lockdown,” a public relations official told PTI.

“As a part of the measures, creating new vacancies, transfer of government staff, holding meetings in expensive hotels, foreign tours and purchase of new vehicles have been prohibited,” he said.

The Punjab government decided to ask the Centre for a fiscal stimulus of Rs 51,102 crores to help the state tide over the financial crisis triggered by the COVID-19 pandemic and the prolonged lockdown that ensued.

A draft memorandum to this effect was approved by the Council of Ministers, at a meeting chaired by Chief Minister Amarinder Singh.

Meanwhile, two days after domestic flight operations were restarted in the country after a gap of two months, national carrier Air India said that a passenger, who had travelled on an Alliance Air flight from Delhi to Ludhiana on 25 May, has tested positive for the novel coronavirus, following which 41 people, including five crew members, have been quarantined.

The plight of migrants also continued to make it to the headlines, a day after the Supreme Court issued notices to the Centre and states on the issue.

However, Railways officials said that most of the deceased had pre-existing health conditions.

Among the dead was 35-year-old Uresh Khatoon. Her toddler’s vain attempt to awaken her from the eternal sleep on a platform in Bihar’s Muzaffarpur was captured in a moving video that went viral on social media Wednesday, opening the floodgates of criticism for the Railways. The Railways attributed her death to a recent heart surgery, also corroborated by her son.

Another death reported from Muzaffarpur was that of a four-and-a-half-year-old son of a migrant from Bihar based in Delhi. The boy died at the railway station on arrival by a ‘Shramik Special’ train, while his father desperately hunted for some milk he believed would have saved his child.

While the father said that his son died of heat, Deputy Superintendent of Police, Railway, Ramakant Upadhyay, claimed the boy was ailing for some time and had died before the train reached Muzaffarpur station.

Two migrant workers were also found dead on a Shramik Special train at a Varanasi railway station on Wednesday morning.

Travelling migrant workers have complained of lack of food and water on-board these Shramik Special trains and also alleged they are not running on time and are being diverted “at will”.

The Railways has, however, maintained that these trains are running on “pre-scheduled rationalised routes”.

Some trains which should have taken 24 hours to reach to their destinations, arrived in over two days, according to reports, leaving the passengers on-board hungry and desperate.

Schools in West Bengal to remain shut till 30 June

West Bengal chief minister Mamata Banerjee said the state considers ferrying of a large number of migrant workers by trains as a big problem for public health, as she sought Prime Minister Narendra Modi’s intervention in the matter. Those returning from the coronavirus hotspot states of Maharashtra, Delhi, Gujarat, Madhya Pradesh and Tamil Nadu will have to go for a 14-day institutional quarantine, Banerjee said.

Migrant workers wait outside a railway station in Mumbai hoping to be able to return to their home states. AP

The state government also announced that all schools will remain closed till 30 June.

In Mizoram, Chief Minister Zoramthanga said his government is contemplating extending the coronavirus-induced lockdown beyond 31 May in view of the influx of migrants from outside the state.

The Himachal Pradesh government has already authorised all district magistrates to extend the coronavirus lockdown beyond 31 May and three DMs have issued orders indicating that the curfew will continue in their areas for another month.

A nationwide lockdown has been in place since 25 March and the ongoing fourth phase of the lockdown is scheduled to remain in place till 31 May. While several relaxations have been given in the fourth phase for allowing various economic activities, educational institutions are among those that have not been allowed to open as yet.

Don't Miss it Stock Market: Live News During the Coronavirus Pandemic
Up Next SA health authorities backtrack after blaming Victoria for coronavirus blunder