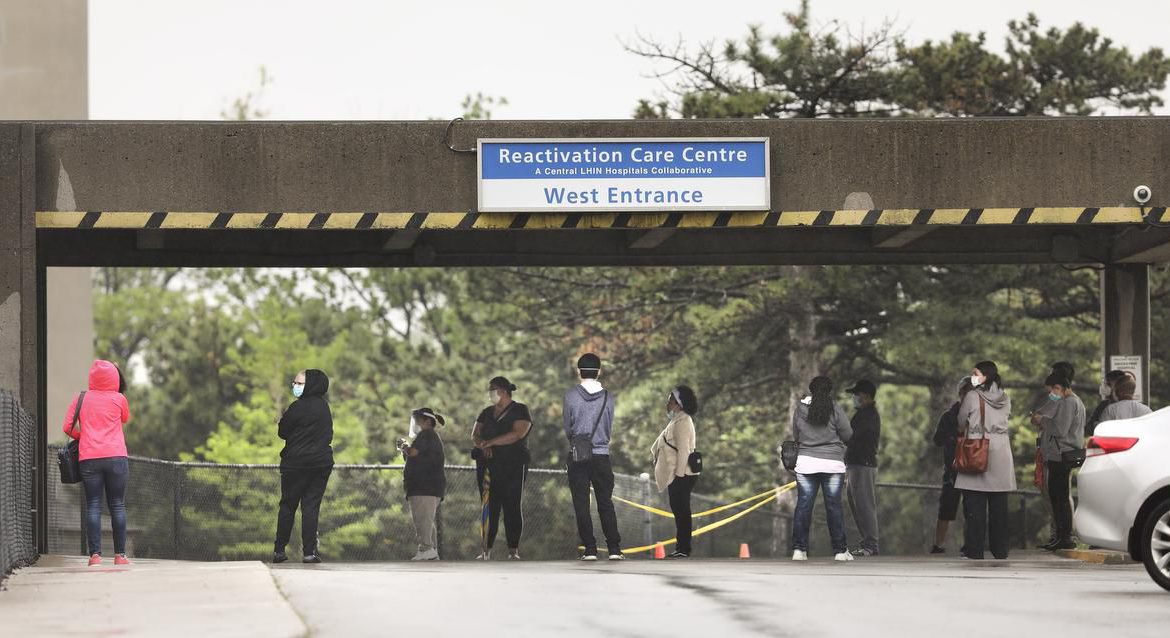 As the pandemic’s disproportionate burden grows more starkly obvious, the province has yet to begin collecting COVID-19 data on income and race that could help reveal the depths of these inequities.

Toronto Public Health released maps on Wednesday that offer local proof of a larger trend health experts have warned of for weeks: that some communities have much higher concentrations of COVID-19 cases than others, and that this clustering is not random.

On average, the five most affected neighbourhoods have significantly higher proportions of people who are low-income, racialized, immigrants, and live in denser housing with longer commutes.

Comparing these geographic pockets reveals telling disparities. But area-based analyses are no substitute for individual-level data on income, race and other socio-economic factors, experts say.

While Toronto Public Health already collects this data, Ontario has yet to begin, despite the province’s top doctors committing to it more than three weeks ago. Experts say this information is essential to fighting the pandemic and its impacts on the most vulnerable.

“What are the dynamics that are creating risk in some groups more than others?” says Arjumand Siddiqi, Canada Research Chair in population health equity and a professor at the University of Toronto’s Dalla Lana School of Public Health.

“We are structuring society in a way that’s fundamentally unjust. And I don’t think you can really escape that logic, when you see the numbers right in front of you.”

Census data shows distinct differences in the Toronto neighbourhoods bearing the highest concentrations of COVID-19 cases, compared to those with the least. (These areas should not be considered more risky or more safe, Toronto medical officer of health Dr. Eileen de Villa emphasized Wednesday: it shows where infected people live, not where they acquired infections, and the virus is in every neighbourhood in the city.)

Among the five most affected areas, the median household income is an average of $53,000, and 24 per cent qualify as low-income. Among the five least affected areas, the average median household income is $95,000, with 12 per cent counted as low-income. The five most affected neighbourhoods have more than double the percentage of visible minorities compared to the five least affected — 59 per cent compared to 26 per cent — and nearly double the percentage of residents living in five-storey-plus highrises.

Notably, both groups had identical fractions of residents that take public transit to work. But the five neighbourhoods with the highest rates of COVID-19 had an average of 22 per cent of residents with hour-plus commutes, versus just 9 per cent with super-long commutes for those in the five least-affected areas.

De Villa suggested Wednesday that access to testing sites, under-housing and affordability of supplies like masks were all factors the city would take into consideration in addressing Toronto’s COVID-19 disparities.

These area-based statistics are helpful for directing public health resources, experts say. But they are not an acceptable replacement for granular, individual-level race-based and socio-economic data.

Instead of knowing more diverse neighbourhoods are more affected, we need to know whether Black or other racialized people are more at risk of severe outcomes and death — as the U.S. and U.K. have found — and why.

“If you collect this data, we can at least descriptively say, here’s the problem in factual terms — not us wondering what’s going on, not us trying to make a case from anecdotes that are starting to get overwhelming, quite frankly,” said Siddiqi.

On Thursday, Toronto City Council voted to formally request that the government of Ontario require the collection of COVID-19 testing data broken out by race and occupation, and request that the province share this information with public health units and the public at large.

Toronto Public Health has been collecting individual-level data on race, occupation and other socio-economic factors for about a month, in addition to the type of geographic analyses released Wednesday, noted Coun. Joe Cressy (Spadina—Fort York), chair of the Toronto Board of Health. (The city said it is too early to analyze this individual data.)

But even though the city already collects it, mandated, provincewide data is still necessary, Cressy said.

“To truly understand an evolving new virus, we need data at scale,” he said.

“We have a province of 14 million people … we need to be on the same page in terms of the information we’re collecting and how it informs our response. The data we’re collecting in Toronto should not be drastically different than the data being collected in Windsor or Ottawa.”

“I have no idea” why the province had yet to begin collecting this, Cressy said.

Dr. Barbara Yaffe, Ontario’s associate chief medical officer of health, cancelled an interview with the Star on Wednesday to discuss the province’s collection of individual level race-based and socio-economic COVID-19 data. A spokesperson instead sent a statement saying that “we are committed” to collecting this data and that “we are working with partners to determine implementation.”

On Thursday, in response to a detailed set of questions, a spokesperson for the health ministry said the government had given permission to regional public health units to collect this data if they want to.

Chazan added that “We recognize that this data is important in order to guide our decision-making on how to protect vulnerable groups who may be at a higher risk for COVID-19.” In response to who it would be shared with, she said that “Once this data collection begins, we will work with our partners to determine the best way to release this information.”

NDP Leader Andrea Horwath said in a statement: “It’s shameful that (Premier Doug) Ford has been resistant to mandating the collection and sharing of race-based and socio-economic COVID-19 data, but he can no longer ignore this information. This is urgent and lives are at stake.”

Kate Allen is a Toronto-based reporter covering science and technology for the Star. Follow her on Twitter: @katecallen