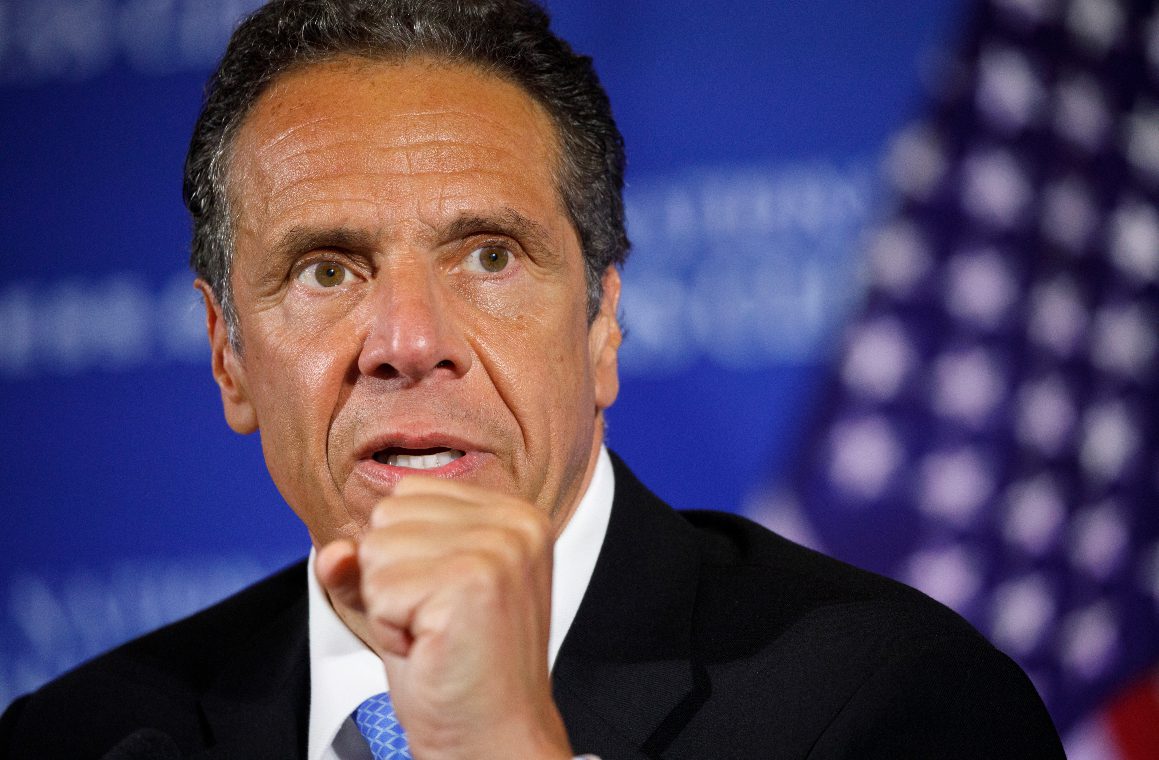 NEW YORK — New York Gov. Andrew Cuomo made it very clear who was in charge as the coronavirus began to infiltrate his state. The governor — in near-daily nationally televised appearances — said he would make difficult but necessary choices to contain the spread and would take the blame for any negative effects on New Yorkers’ lives.

“The buck stops on my desk,” Cuomo said to both a New York and national audience on March 17, after ordering bars and restaurants to close across the state. “Your local mayor did not close your restaurants, your bars, your gyms or your schools. I did. I did. I assume full responsibility. … If you are upset by what we have done, be upset at me.”

Two and a half months into the crisis, Cuomo’s take-charge attitude has begun to soften. The governor, who gained legions of fans for his briefings that blended an authoritative tone with a personal touch, is increasingly on the defensive — and casting blame on the federal government and its guidance.

“Who should have known?” he said at a press conference last week, explaining that the state could have better controlled the virus if someone told him it had spread to Europe. “It’s above my paygrade as the governor of one state, but what federal agency? What international health organization? I don’t know. It’s not what I do; it’s not my responsibility. But someone has to answer that question.”

Gone is the split-screen Cuomo often shared with President Donald Trump early in the outbreak. Now, Cuomo is still briefing almost daily, though not as often to a national audience, while Trump has shied away from the podium.

The limelight’s fade coincides with mounting scrutiny of New York state’s response to the crisis, particularly in nursing homes, where more than 5,700 residents have died from Covid-19. A growing body of research is finding that earlier shutdown measures could have averted many of the state’s more than 23,700 fatalities.

“It’s ludicrous. You can’t one day say you can blame me and the buck stops with me, and the next day pass the buck to anyone besides yourself,” said Assembly Member Ron Kim (D-Queens), who has previously clashed with Cuomo.

But Cuomo‘s top aide, Melissa DeRosa, said the administration can and will shoulder its share of blame.

“We will take our responsibility; we embrace it,” DeRosa, the secretary to the governor, said in an interview. “We’ve done press conferences every single day. We’ve made decisions that are unimaginable in terms of their effect on people’s lives and livelihoods and could have an impact, negative or positive, for decades. We will continue to make them and if any one wants to complain about them, they can complain to us. But there are also facts about how this happened. And there are different levels of responsibility that rest on different layers of government.”

The national and international officials whose “actual job it is” to monitor global health threats responded to inquiries from New York during January, February and early March by saying the virus was contained, she said. That was about the time the Cuomo administration was focused on redesigning its Medicaid program and grappling with legalizing recreational marijuana.

Cuomo’s PowerPoints and years of crisis management have partially shielded him from the criticism de Blasio has gotten for his handling of the public health crisis. But de Blasio was out in front of Cuomo at several key moments in the pandemic, only to be undermined by the governor, who then adopted the same policies days or weeks later.

Something Cuomo’s never quite taken to is the ability to accept a hit, “whether or not it’s earned,” said one former administration official who asked not to be named because of deep ties in New York politics. And after nearly 90 days of hard-charging disaster response, the governor and his administration could alienate a new fan base with a search for a scapegoat even as they move toward rebuilding New York.

“That’s the hardest thing when you’re in the government, to just kind of suck it up and take it,” the official said. “Cuomo’s folks have to be super careful. I see it creep in a little bit. They’re tired, they’re starting to get more defensive.”

The governor has drawn particular criticism for his policy of sending recovering Covid-19 patients to nursing homes, which he effectively reversed this month — even as he denied the change was a reversal at all. State officials say the nature of the fast-moving and unprecedented crisis forced the state to follow national guidance on the issue.

“Anyone who wants to ask, ‘Why did the state do that with Covid patients in nursing homes?’ — it’s because the state followed President Trump’s CDC guidance,” Cuomo said May 20. “So, they should ask President Trump.”

Manhattan Assemblymember Richard Gottfried, a Democrat and chair of the Assembly’s health committee, is among state lawmakers calling for an independent investigation of the state’s handling of the outbreak in nursing homes. He says the blame rests largely on decades of ignoring issues that became more acute during the pandemic.

“The federal government never told New York to tolerate low staffing levels in nursing homes or to have a lax or understaffed enforcement of health and safety safeguards in nursing homes,” Gottfried said. “The executive branch — going back decades — has done that all by itself.”

The pandemic conjured a much different version of Cuomo than the first two years of his third term. Approval ratings skyrocketed as his public persona — one that’s often criticized as cold or aloof — hit the right mark for scared Americans. But as the crisis drags on and at least a few of his dozens of executive orders have come with unintended consequences, some key Cuomonian tendencies are rearing their heads, said Fordham University political science professor Christina Greer.

“For those of us who study New York politics, we know Cuomo, and the Cuomo we’ve seen for the past few months is a slight deviation from the Cuomo that we know,” said Greer, who predicted that under increased scrutiny, “we see the Cuomo we’re most accustomed to come back.”

Cuomo has long clashed with de Blasio, and the pair’s relationship may have contributed to delays in the early days of coronavirus spread in the state as they disagreed on how quickly to act.

“His knee-jerk reaction is to completely disagree with the mayor and then circle back and make headlines for saying exactly what the mayor says,” Greer said of Cuomo. “And again, who suffers? The people of New York.”

Cuomo was slower than de Blasio to call for a stay-at-home order, make masks mandatory across the state, keep schools closed for the rest of the academic year and implement subway restrictions.

Now state legislators are hoping to examine the state’s coronavirus response as they reconvene — primarily remotely — for the first time in nearly two months this week. The executive branch holds an outsized role in New York’s government, even in normal times. But Cuomo’s executive powers have effectively silenced the Legislature even as lawmakers in other states have held hearings blasting their governors’ responses.

One sign that Cuomo’s crisis honeymoon could have a limit is new polling from Siena College Research Institute. Cuomo was viewed favorably by 66 percent of respondents and unfavorably by 30 percent. That’s down from the 77-21 he received in Siena’s April poll, but still better than any numbers he received in the six years preceding the pandemic. The one performance metric that was not backed by a majority was “addressing the needs of nursing homes,” where he polled at 44-48.

Another is from the governor’s social media accounts, where he drew uncommonly effusive comments early in the crisis. These days, fervid marriage proposals and calls for Cuomo to run for president in the live comments during his briefings are more evenly intermixed with the Twitter users blasting him for the deaths of their relatives in nursing homes or continued unemployment as the state slowly reopens.

Cuomo, for his part, says he’s not slowing down in his briefings or decision making. “When the Covid virus takes a day off, we will take a day off,” he said over Memorial Day weekend. In recent weeks he’s held more events outside Albany, where he is likely to face scrutiny from reporters who cover him full-time, and has added in new faces to his briefing table — such as comedian Chris Rock and actress Rosie Perez in Brooklyn on Thursday — to further amplify his messages.

“With the hard work, the honesty and the super-human challenge he faced — I think he’ll come out fine,” the former administration official said. “But I’m a little concerned for him. He’s gotta be tired. Every once in a while, I’m also a little fearful the people around him are echoing him as opposed to saying ‘this is a critical time where you really ought to be careful.’”

This article tagged under:

Don't Miss it Animal sanctuaries are doing it tough during the coronavirus crisis | 7.30
Up Next Coronavirus latest: Cuomo says New York City on track to begin reopening on June 8