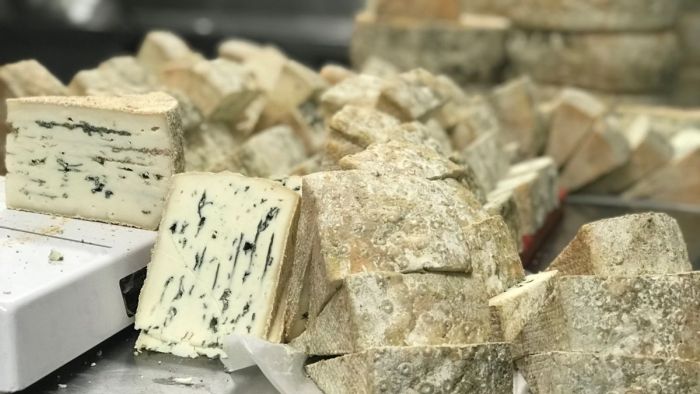 Bushfires meant the usually booming summer season was a wipe-out for many regional cheese businesses with cellar-door operations.

Key points:Bushfires and COVID-19 restrictions have put pressure on regional cheese businesses relying on tourismA Queensland online cheese retailer has put together “rescue boxes” to promote struggling businessesThe response has been more than enough to keep cheesemakers in business

When tourists were ordered to stay away from fire-affected regions, Milawa Cheese in north-east Victoria was left with hundreds of kilograms of ripe cheese.

“It wasn’t going to last, it would have to be given or thrown away,” cheesemaker Ceridwen Brown said.

Cheese Therapy, an online specialty-cheese retailer in Queensland, came to the rescue.

It put out an SOS on Facebook asking its cheese loving followers to buy a “rescue box” to help Milawa out.

“We thought we were going to sell about 50 packs; we sold 2,000 packs of cheese for Milawa and it really just cleared out all of their stock [and] got them back on their feet,” Cheese Therapy co-founder Sam Penny said.

“The response that we got from right around Australia was unbelievable.”

Mr Penny’s wife Helen Shadforth was not surprised by the generous response.

“Australians are great at helping Australians,” she said.

“We’ve been finding it’s snowballing, and a lot of people are asking, can they do more than just buy a cheese pack?

“It’s brilliant but also not completely surprising because of how fanatical cheese people can be!”

Sam Penny and Helen Shadforth are thrilled with the response to their delivery service.(ABC Landline: Pip Courtney)Selling cheese to a ‘ghost town’

Milawa Cheese was again caught holding product made in expectation of a busy Easter period.

“Milawa was a ghost town, it was eerie and surreal,” Ms Brown said.

Coronavirus restrictions have crippled the tourism industry in many regional towns.(ABC: Rachel McGhee)

Once again, Mr Penny and Ms Shadforth put together boxes for Milawa Cheese and others.

“Cheese Therapy was able to take a really large chunk of that really nice ripe stuff for us, which was fantastic, really a lifesaving measure for us,” Ms Brown said.

“It’s a bit of an emotional rollercoaster at the moment.

“You sit there in the morning, looking at the bank balance dwindling, and then you get an order and you think, ‘We can keep paying our staff and keep everyone employed for just that little bit longer.'”

Cheese Therapy’s social media posts about the cheesemakers and the farmers who supply them with cow, sheep, buffalo and goat milk were shared widely.

Orders climbed from a few hundred a week to several thousand.

Three-thousand orders arrived the week before Easter, and the entire stock of cheese from Grandvewe in Tasmania sold in just two days.

“The start of April was when we flicked the switch and turned everything on, and this month alone will be more than twice our revenue from last year,” Mr Penny said.

“I reckon there’s probably about 50 to 80 people who’ve been able to keep their jobs because of how much cheese we’re selling.”

At the start of the year, the business provided enough work for Mr Penny and Ms Shadforth, but soaring sales meant they had to find bigger premises and hire 20 staff.

Most of their new employees came from the restaurant, beauty and fitness industries, and had been stood down due to the pandemic.

Brianna Thompson was just one who found work with the company.

“I was a lifeguard at the Settlement Cove Lagoon in Redcliffe and once they closed pools, it was like, ‘Oh ok, now what?'” she said.

The company’s cheese cutters come from a range of industries affected by the pandemic.(ABC Landline: Pip Courtney)

Sara Dillon, a caterer who had lost six months of bookings, became a cheese cutter after Mr Penny and Ms Shadforth were unable to handle all the work themselves.

Ms Dillon has taken on 12 staff to help her.

“It’s fairly incredible, you know. Sam and Helen have done a great thing for the cheesemakers, for the farmers, for me, for all my staff,” she said.

Artisan or specialty cheese isn’t cheap, but Ms Brown said there was a simple reason were splurging on fine cheeses in a time of uncertainty.

“For those that can, there’s the discretionary sort of expenditure where they can lash out on delicious cheese rather than going on a holiday,” the Milawa cheesemaker said.

“It’s a small consolation, but it’s a delicious one.”

Fine cheese might be a small comfort in a troubling time.(ABC Landline: Pip Courtney)

Watch this story on ABC TV’s Landline at 12:30pm or on iview.

Don't Miss it Coronavirus excess deaths: UK has one of highest levels in Europe | World news
Up Next Coronavirus vs flu: Which is more dangerous? | DW News