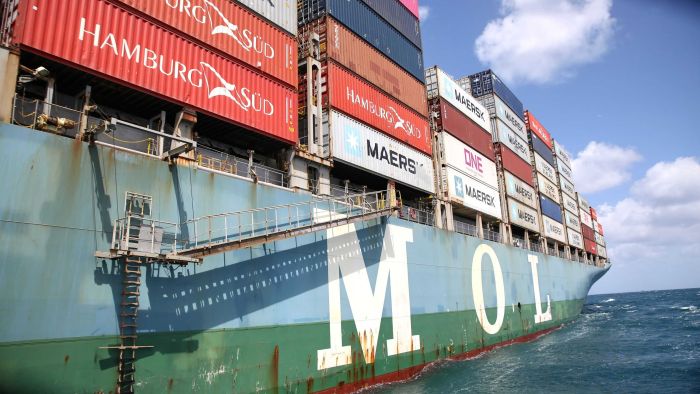 Once again, an enormous ship has cruised into an Australian port carrying passengers infected with coronavirus.

Key points:The Al Kuwait arrived in Fremantle just over a week agoSince then about 20 of its crew have tested positive for COVID-19Experts say it is a new reality facing import and export businesses

While the live export vessel the Al Kuwait is unlikely to have the devastating effect on Australian lives like the Ruby Princess, both boats have reminded us how difficult it is to ever fully close our borders to the new coronavirus.

While Australia can — and has — closed its borders to foreigners, it needs to keep them open to keep our trade industries in business.

It is a new reality facing our import-export businesses, with ships like the Al Kuwait a key part of the international trade that Australia needs for economic recovery.

Around Australia, shipping is helping to keep international trade alive at busy ports like Gladstone in Queensland and Port Hedland in Western Australia.

While port activity across Australia is down, trade expert Jeffrey Wilson said Australia was doing better than many other countries because its most important exports — minerals and agriculture — were still in demand.

He said Australia’s export industry was worth more than $380 billion last year, dominated by iron ore, which was mostly bought by China.

“People need to eat and factories need to keep making steel in China,” he said.

But as the Al Kuwait has shown this week, these movements between countries also allow the coronavirus to spread.

In the case of the Al Kuwait, it arrived in Fremantle just over a week ago to pick up 56,000 West Australian sheep to transport them to the Middle East.

It came from the United Arab Emirates, where Reuters reported on Friday there were more than 32,500 coronavirus infections and 258 deaths in a population of fewer than 10 million.

Almost half of the 48 crew on board Al Kuwait have tested positive to COVID-19.(ABC News: David Weber)

Of the 48 crew on board, 20 have tested positive for coronavirus since they arrived and are in isolation at a Perth hotel.

Five West Australians boarded the Al Kuwait and have been tested.

None of them has returned a positive test, but will be monitored for 14 days.

The positive cases — along with the news this week that a family of four who arrived in Perth via plane from Doha were also infected — were a stark reminder that our borders are a weak point in our defences against coronavirus, as noted by Premier Mark McGowan.

“It’s those people that come in from overseas on ships or aircraft,” Mr McGowan said on Friday.

“We are doing our best to quarantine and provide protection from that.”

There are not only health risks from these COVID-positive visitors, but costs to Australian health systems in keeping them in isolation.

As WA Treasurer Ben Wyatt pointed out this week, at its peak the practice of isolating international and interstate arrivals in hotels was costing the state $250,000 a day.

Dozens of crew from the Al Kuwait are in quarantine in a Perth hotel.(ABC News: James Carmody)

Australia has long had some of the world’s strictest biosecurity rules, which have been supercharged to deal with the coronavirus threat and keep international trade via sea and air operating.

The rules for commercial and government ships arriving at Australian ports (excluding cruise ships, which are banned until mid-September) are extensive.

But there are weaknesses, as demonstrated this week over the failure of the WA Health Department to act immediately on reports of a crew member with a fever.

The situation was not unlike the Ruby Princess, where problems stemmed from communication between ships and local authorities about the health of their crew and how this information was interpreted and acted upon.

An inquiry has been held into the handling of the Ruby Princess cruise ship.(Supplied: NSW Police)

Dr Wilson, the research director at the Perth USAsia Centre, believes the new health risks are here to stay and Australia must continue to manage them until a vaccine is found.

“If there’s no vaccine, it’s going to be like this forever,” he said.

“Without an effective global vaccine, your policies have to adjust for the worst countries in the system.”

But Dr Wilson said Australia and New Zealand, which have some of the world’s strictest biosecurity rules, already had the infrastructure to handle coronavirus border controls.

“Every country in the world’s going to have to start doing what we’re doing so in a way we’re ahead of the pack,” he said.

Don't Miss it Delhi: Hospital bed crisis looms as Covid-19 cases rise in capital
Up Next Can you contract coronavirus from a surface or object?