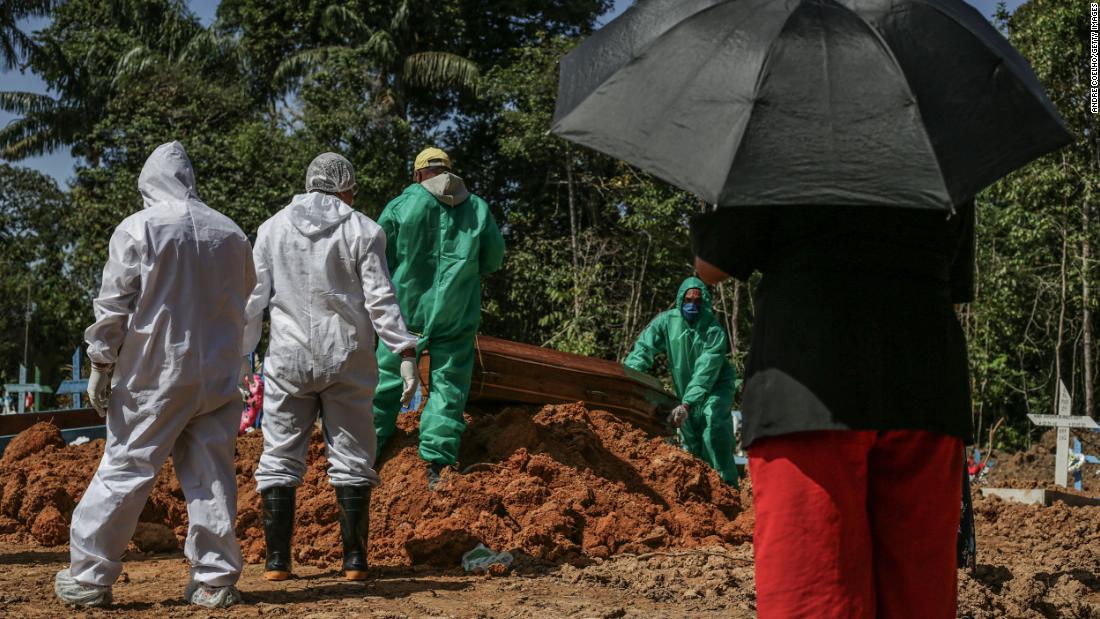 “This is the new epicenter,” said Dr. Marcos Espinal, director of communicable diseases at the Pan American Health Organization.

Months after emerging from a relatively obscure Chinese province, the eye of this viral storm has firmly landed in Latin America.

There are roughly 920,000 confirmed coronavirus cases and nearly 50,000 deaths across the region’s 33 countries, but those numbers are fast on the rise.

As new deaths and cases fall in the United States, Europe and Asia, Latin America now stands as the world’s sole region where the outbreak is unequivocally reaching new heights.

“In many ways this is no surprise,” said Dr. Ana Diez Roux, dean of Drexel University’s School of Public Health. “It was predictable that this was going to happen.”

In conversations with eight different experts, including a former head of state, epidemiologists and top researchers on the region, there is wide agreement that faulty government response coupled with Latin America’s unique economic and public health situation led to the severity of the current outbreak.

The experts were also nearly unanimous in the view that things are likely to get worse.

How we got here

Latin America recorded its first confirmed case in February, when a 61-year-old man tested positive in São Paulo, Brazil after returning from a trip to Italy.

For weeks afterward, things seemed to be under control. Case totals in the region crept only marginally higher. The first death wouldn’t be recorded until March 7 in Argentina.

But some already suspected there would be tragedy to come.

In a March 19 op-ed for the New York Times, Miguel Lago, a Brazilian public health expert, wrote that Latin America was not prepared for the virus and that the region might eventually become worse than Europe.

“[Latin America] could become the biggest victim of Covid-19 if health authorities and governments… do not take immediate actions.”

His words would prove prescient. By the middle of May, Latin America was reporting higher daily case total increases than both the United States and Europe.

Brazil would surge past Italy, the United Kingdom and Russia to record the second highest number of cases in the world.

A global shortage of tests and some countries’ reluctance to mass test have also raised doubts about whether cases and deaths are being accurately counted in the region.

“[The official numbers] provide a false sense of security. The number of cases is not showing close to the magnitude of the problem,” said Dr. Espinal.

CNN reported on the viral outbreak in China the first week of January. By March 1, health experts around the world warned of an unstoppable pandemic.

Every Latin American government knew, or should have known, what was potentially coming, and in March, many regional leaders took actions that suggested they understood the threat.

“There were a few bad examples of governments that simply did not care, and presidents chose not to act,” said Luis Guillermo Solís, the former President of Costa Rica.

He specifically pointed to the heads of Latin America’s two largest countries, Brazil and Mexico, representing roughly half of the region’s total population.

Brazilian President Jair Bolsonaro and Mexican President Andrés Manuel López Obrador both quickly and consistently played down the threat of the virus in March. Bolsonaro called it a “little flu.” López Obrador held up two amulets at a press conference and, smiling, said they would protect him.

López Obrador eventually urged people to stay home and authorized the shuttering of vast sections of the economy. But his critics say unclear messaging has contributed to a Mexican public clearly skeptical of the virus’ mortal threat.

Mexico has seen its highest daily increases in deaths and new cases this week. It has recorded about 85,000 confirmed cases and around 9,400 deaths, though health officials say the actual figures are significantly higher due to Mexico testing at a far lower rate than many other countries.

Bolsonaro, however, has only doubled down on his initial claims. As Brazil’s outbreak grew exponentially into one of the worst in the world, with more than 465,000 cases and nearly 28,000 deaths, he has consistently attended large rallies packed with thousands of supporters.

“There has been a tension between local and state authorities who have wanted to go much further in terms of social distancing and they have been in tension with the national leadership,” said Katherine Bliss, senior fellow at the CSIS Global Health Policy Center.

Bolsonaro has argued the true threat is from quarantine measures imposed by state governors across the country — measures that have undeniably hurt Brazil’s economy.

But there is near universal agreement that Brazil’s outbreak would be far worse had those governors not taken action.

The lack of swift responses in Brazil and Mexico were outliers in the region.

“You had to isolate, you had to prevent people coming into your country,” said Solis. “By and large, I think that phase was handled correctly.”

Peru, Chile and Ecuador all closed their borders to foreigners in mid-March, while swiftly imposing tough quarantine measures that amounted to national lockdowns.

But two months later, Peru has the second-most confirmed cases in Latin America, Chile has the third, and the Ecuadorian city of Guayaquil experienced one of the world’s worst-known localized outbreaks.

The situations in those countries deteriorated despite widespread and proactive efforts by governments to contain the virus.

To explain why this is happening, experts point to at least two likely causes: Prevention measures have been made ineffective by massive economic inequality, and a lack of investment in public health systems undermines the ability to care for the sick.

Latin America has consistently been plagued with some of the world’s worst economic inequality, leading to massive amounts of workers participating in the so-called informal economy.

These are workers that do not earn a formal paycheck and must go into the streets every day to ply their wares, be it selling tacos, shining shoes or cleaning houses. They’re unlikely to have much, if any, savings to fall back on and they definitely don’t get sick leave.

About 55% of all workers in Latin America toil in the informal economy, according to the World Economic Forum, totaling nearly 140 million people.

Living hand-to-mouth and with families to feed, many of these people still go out each day across Latin America, quarantines be damned.

“It’s very difficult for governments to maintain tough measures like lockdowns because these people must go out daily to earn money to survive,” said Carlos Malamud, a senior analyst at Spain’s Elcano Royal Institute.

Government subsidies could provide more incentive to stay home but cash-strapped countries simply don’t have the means to provide the level of support that would allow people not to go out to work.

“The safety measures that one needs to take to stop the spread of the pandemic are simply absent,” said Cynthia Arnson, director of the Wilson Center’s Latin America Program.

In other words, many people couldn’t socially distance if they tried.

Latin American countries have also for years neglected to invest more in public healthcare that, in many cases, is written into constitutions as a right guaranteed to citizens.

The Pan American Health Organization says the vast majority of countries in the region invest less than its recommended 6% of GDP into public health.

That leaves public hospitals chronically underfunded but routinely overwhelmed by those seeking care.

The situation is difficult enough during times without a pandemic. But Covid-19 has pushed some public hospitals in Ecuador, Peru and Brazil to the brink of collapse and beyond.

Without proactive investment in public health systems, “You can take care of a pandemic for a little while, but you cannot keep up a sustained process,” said Solís.

Where does it go from here?

In Latin America, like everywhere else in the world, there are two overriding and at times conflicting goals as this outbreak progresses — how to slow the virus’ spread while jump-starting the economy.

The Pan American Health Organization believes the outbreak will continue at current levels for at least the next few weeks.

An influential model from the University of Washington predicts Brazil could surpass 125,000 deaths by August.

Strained public health systems also likely won’t have the ability to track and isolate new cases on a large scale once quarantine measures ease, a strategy most health experts agree is vital to managing the outbreak over time.

“[That] is pretty much the only way we have to control it right now and for that you need very well-functioning systems,” said Diez Roux.

The United Nations is predicting a region-wide GDP contraction of 5.3%, the largest such contraction since records began in 1900. Thirty million people are expected to be added to the number of poor.

With worldwide economic activity depressed, Latin American economies that are extremely reliant on global trade will not be able to turn abroad for relief.

“I am extremely worried,” said Cynthia Arnson of the Wilson Center. “The economic pain is simply staggering.”

It’s a brutal cycle but it represents the foreseeable future of Latin America — the region where the virus’ short- and long-term effects could be felt the most.

“Latin America is like a perfect storm,” said Lago, the Brazilian public health expert who warned about this way back in that March op-ed.

Even then, it was likely too late to do much.

Don't Miss it Global report: new clues about role of pangolins in Covid-19 as US severs ties with WHO | World news
Up Next Coronavirus latest: Lufthansa agrees €9bn rescue package with Brussels and Berlin