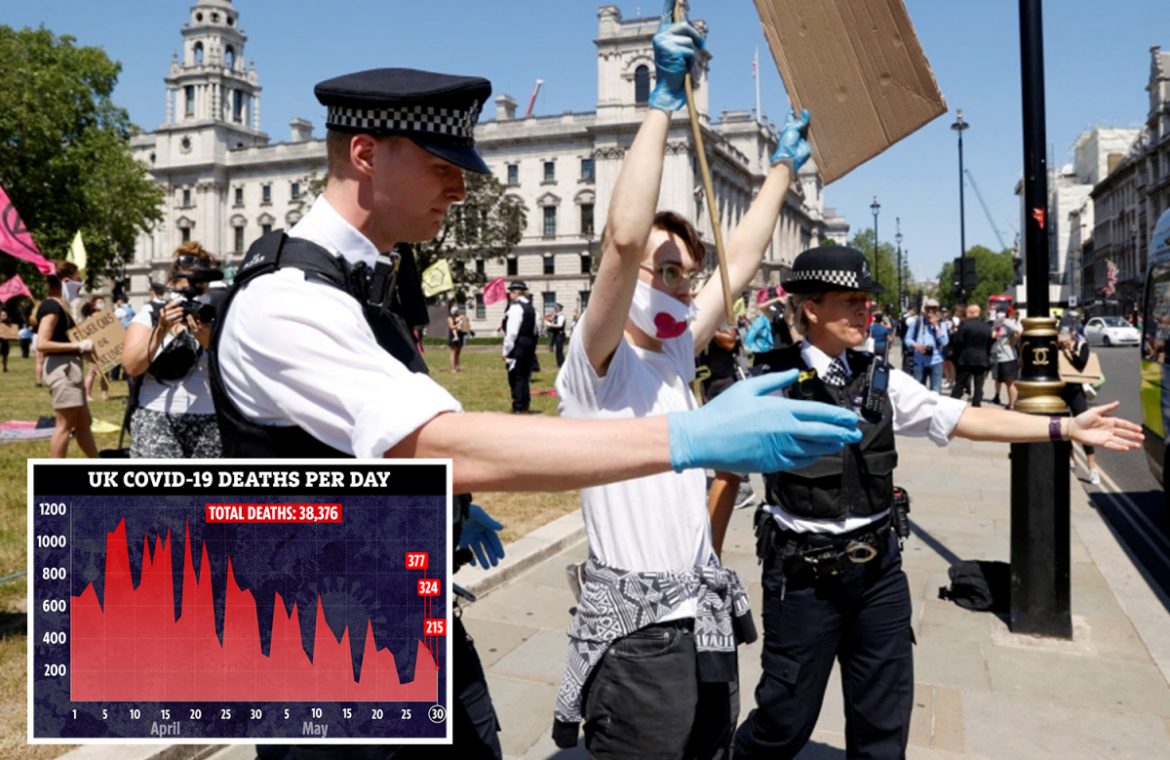 CORONAVIRUS deaths in the UK have risen to 38,376 after 215 more people lost their lives to the deadly disease.

A protester in Westminster todayCredit: Reuters

The government gave the latest death toll at the No10 press briefing tonight and revealed 127,722 tests were carried out yesterday – above the 100,000-a-day target.

The rise is lower than yesterday when 324 deaths were recorded in 24 hours – the smallest rise recorded on a Friday for the last nine weeks.

Last Saturday, 282 people were killed by the disease – with the figures usually lower at the weekend due to a lag in reporting.

In England, 146 deaths were recorded – meaning 26,529 people have now died from coronavirus in hospital in England.

NHS England confirmed the latest victims were aged between 46 and 97 – with six having no underlying health conditions.

In Scotland today, 22 more people have died – bringing their total death toll to 2,353.

The figures for Northern Ireland have not been released yet.

The grim figures come after the Office for National Statistics (ONS) revealed this week 47,000 people may have been killed by the deadly bug in Britain already.

And according to data reported yesterday, the UK has registered 59,537 more deaths than usual since the week ending March 20, just before the lockdown began.

The figures equate to 891 people per million – a higher rate of excess deaths than any other country in the world with the same quality of data.

It comes as England prepares to relax lockdown on Monday – with people able to meet safely in groups of six in a household’s garden or outdoors.

Reception, year one and year six students will also head back to classrooms but headteachers have warned they will look very different with strict social distancing measures in place.

Boris Johnson announced he would be easing the restrictions after the five crucial tests for lifting lockdown had been met.

But scientists have warned it is premature to ease lockdown restrictions.

Sir Jeremy Farrar and Professor John Edmunds, both members of the Scientific Advisory Group for Emergencies – which advises the Government on the coronavirus crisis – said ministers were taking risks by following their current plans.

They expressed concern at allowing the gradual reopening of shops and schools and larger gatherings to meet in private while the number of new cases each day remains “relatively high”.

FLOCKING HELL!Brits ignore plea not to meet in groups as they pack beaches on 28C scorcher

Brits have been warned to stick to the lockdown rules until they are eased – despite a heatwave forecast this weekend.

The Prime Minister’s decision not to relax lockdown until Monday means Brits are facing a weekend of temptation with temperatures of 25C forecast.

Don't Miss it Dr Brendan Murphy says his biggest coronavirus concern is 'a large second wave' | 7.30
Up Next States and territories are moving to their next stages of easing coronavirus restrictions. This is who’s changing what and when