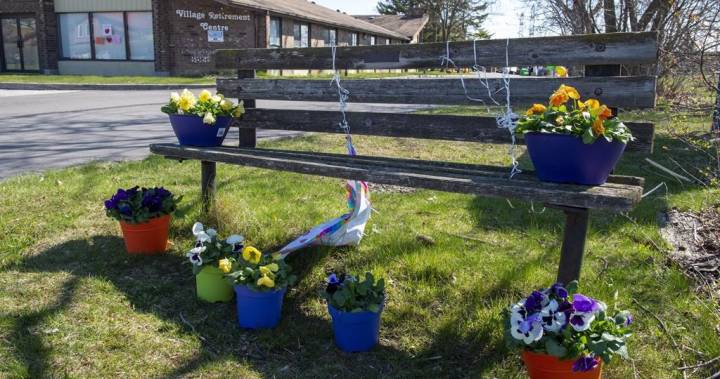 The coronavirus pandemic has now claimed more than 7,000 lives in Canada.

The number of fatalities rose by 95 on Saturday, for a national death toll of 7,074. For the fifth day in a row, Canada reported less than 1,000 new cases of COVID-19.

Quebec, the worst-hit province in Canada, accounted for the majority of those deaths, reporting 76 fatalities along with 419 new cases of the virus.


READ MORE:
How many Canadians have the new coronavirus? Total number of confirmed cases by region

COVID-19, the disease caused by the virus, has infected more than 90,100 people in Canada, with a little more than half of the cases diagnosed in Quebec. More than 1.7 million Canadians have been tested for the virus.

Public health officials have said that most of Canada’s deaths have occurred in long-term care facilities.

The Canadian Forces deployed members to Ontario and Quebec in order to help care for residents last month. The soldiers recently sounded the alarm over poor conditions in some homes.

New Brunswick saw almost all its cases resolved in recent weeks, but is now seeing a cluster of cases linked to a doctor who visited Quebec in early May and failed to self-isolate afterward.


READ MORE:
Coronavirus: Montreal’s tourism to take a massive hit in revenues due to COVID-19 pandemic

On Saturday, the province announced one new case, bringing the latest cluster to nine cases. New Brunswick has 129 cases total, including 120 recoveries and zero deaths.

Alberta reported 13 new cases and one new death on Saturday, for a total of nearly 7,000 cases and 144 deaths. More than 6,000 people are deemed recovered.

British Columbia saw its second day without a COVID-19 death, reporting only 11 new cases. The province has seen more than 2,500 cases since the pandemic began, including 164 deaths.

Saskatchewan reported four new cases but no new deaths. Active cases in the province have dropped to their lowest level since March. Ten people have died so far, and 645 cases have been reported overall.

Nova Scotia reported one new case and one new death, bringing its death toll to 60 — the majority of them linked to a long-term care home in Halifax. The province has seen more than 1,000 cases of COVID-19.

Manitoba saw no new cases on Saturday. Seven people have died in the province, which has seen 283 cases so far, most of whom have recovered. With nine active cases, Manitoba is preparing for the next phase of its reopening plan.

Newfoundland and Labrador had no new cases to report either. Its total number of cases remains 261, with three deaths and three active cases.

Prince Edward Island, the Northwest Territories, and the Yukon have seen no new cases ever since all their cases recovered in the last few weeks.

Nunavut remains the only region without any confirmed COVID-19 cases so far.

Despite increasing death tolls and case counts, the rate of infection appears to be slowing in most provinces, and many have taken gradual steps toward reopening in recent weeks.

The new coronavirus was formally identified in January after Wuhan, China, saw a cluster of pneumonia cases that were not associated with any known virus. The illness caused by the virus was later dubbed COVID-19.

COVID-19 was declared a pandemic on March 11.

The disease has wrought havoc on economies around the world and prompted widespread shutdowns of non-essential businesses, schools and workplaces.

Earlier this week, the U.S. exceeded 100,000 deaths due to the pandemic. And overall, more than six million people around the world have been diagnosed, according to a tally kept by Johns Hopkins University.