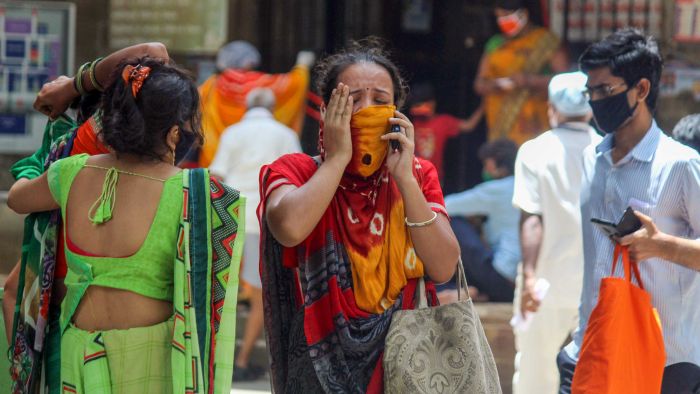 Indian businessman Manit Parikh had thought a lot about the coronavirus pandemic that had swept his home city of Mumbai, but he never anticipated the crisis would engulf his family in just a few days.

Key points:Mumbai accounts for more than a fifth of India’s total COVID-19 casesThe city’s hospitals have been overwhelmed by an influx in patientsSome hospitals have had to leave bodies in wards as morgues struggle to cope

His mother, after suffering a high fever, tested positive for COVID-19. But the hospital she was in could not accommodate her because their coronavirus intensive care unit was full.

He spent hours on the phone trying to get her transferred to another hospital, but each facility was in the same dire situation. They had no spare beds.

“We were scared,” Mr Parikh said.

His mother finally got transferred to another hospital by that evening.

The King Edward Memorial hospital in Mumbai has been inundated by COVID-19 patients since the pandemic began.(ABC News: Nagesh Ohal)

But the very next morning, Mr Parikh’s 92-year-old diabetic grandfather noticed his oxygen levels were dropping, during a routine health check he did at home.

Fearing a repeat of his mother’s experience, Mr Parikh tried to find an ambulance to administer life-saving oxygen while he spent hours searching for available hospitals.

That evening, his grandfather died in hospital. He also tested positive for COVID-19

“[I feel] a lot of anger … basic medical treatment [was] not being given to him because of the lack of hospital beds,” he said.

“The few hours that went by depleted his oxygen count further, resulting in his health deteriorating even more. By the time he got into hospital … we lost him.”

Both Mr Parik’s father and grandmother are now also in hospital after testing positive for COVID-19.

“I thought my entire family would be wiped off,” he said.

“All four of them [tested positive] over a span of three or four days.”

Is Mumbai the world’s next coronavirus catastrophe?

There are hundreds of tragedies like the Parik family’s in Mumbai, a city that has borne the brunt of India’s coronavirus crisis.

A distraught woman is spotted outside the King Edwards Hospital in Mumbai.(ABC News: Nagesh Ohal)

With more than 37,000 infections and 1,200 deaths, Mumbai accounts for more than a fifth of India’s total coronavirus tally and almost a quarter of all deaths.

There are no clear signs the situation is improving, with hundreds — if not thousands — testing positive each day.

Not only were the hospitals struggling to keep up, but so too were the crematoriums and morgues.

For doctors and nurses grappling with the outbreak, it is just another sign of how the healthcare system has become overwhelmed.

“One of the hospitals that I practise in doesn’t have a mortuary,” said Shruti Tandan, who heads up an intensive care unit in a Mumbai hospital.

The hospital morgue is unable to properly store the bodies of Mumbai’s COVID-19 victims and so they’re lined up in corridors.(Supplied)

“There were two deaths [in the ICU] and we couldn’t get the bodies taken away until the next morning because there was a wait list at the crematorium.”

“We are overwhelmed on all fronts. It is a pretty grim situation.”

Doctors forced to turn away patients from ICU A man is helped onto a stretcher at the entrance to Mumbai’s King Edwards Hospital.(ABC News: Nagesh Ohal)

India’s rate of infection has shown no strong signs of flattening, despite the country imposing the world’s largest lockdown in late March.

There are more than 182,000 confirmed cases. On Sunday, the country recorded its highest ever daily increase, with 8,380 confirmed infections.

Mumbai has long been the worst-affected city, with its high rate of infection and buckling health system leading to many seeing it as India’s New York.

Queues of sick people form outside public hospitals, waiting hours in the humid heat for a chance of admission.

One man, Ghanshyam Yadav, told the ABC he could not get admitted despite having papers showing he was COVID-19 positive.

“The nurses keep on saying ‘come back after an hour’, then two hours, then four hours,” he said.

“I have been sleeping on street for the last three days. I am surviving on food and water provided by good people.”

Bhendi Bazaar is one of the busiest and most crowded areas of Mumbai, and is now a blazing COVID-19 hotspot.(ABC News: Nagesh Ohal)

The virus has also broken out in the city’s notoriously large and crammed slums, where communal showers and toilets make social distancing impossible.

For Dr Tandan, the crisis hit hard four weeks ago, when the case load became so immense that he had to start refusing patients into her ICU.

“The whole week I’m on call I didn’t sleep because I was managing beds and saying no,” she said.

Even during her days off work, Dr Tandan is haunted by the things she has seen.

“It just dwells on you, it kills you from the inside — to know that when you are refusing a patient you are indirectly signing a death warrant,” she said.

The situation has been unrelenting since.

Every shift she juggles patients from oxygen tanks to ventilators.

She even once tried to figure out whether she could connect multiple patients to one ventilator, before accepting it was not a feasible option.

It is not just those directly on the front line feeling the brunt.

“Mumbai is full of hospitals, but many of them were caught quite unprepared,” said surgeon Sanjay Nagral.

The overstretched medical system is leading to deaths that are not even attributed to the virus, doctors have said.

“The first few weeks [of the outbreak] were quite disastrous, because many people could not get dialysis and people actually died because of lack of access to dialysis,” Dr Nagral said.

Not even doctors are safe from the virus

Doctors have told the ABC that Mumbai’s hospitals were running at capacity before the spread of coronavirus, meaning it did not take much for the system to break.

In Mumbai, at least four hospitals have been placed into quarantine after outbreaks emerged among nurses and staff.

At least 215 doctors and 310 nurses have tested positive for COVID-19 in the state of Maharashtra.

One of them is Malvika Neeraj, who screens and tests incoming suspected cases at St George’s hospital.

She has since recovered but remains quarantined at the hospital’s living quarters as neighbours in her housing complex have made it clear they do not want her coming and going from the hospital.

“It humbles every doctor because you realise no one is safe from the disease,” she said.

The state of Maharashtra has started utilising private hospitals to ease the case load, but for doctors on the frontline, these steps are too little, too late.

“It’s not a matter of who will make or lose money, but who will live or die.”

Don't Miss it UK coronavirus death toll rises to 38,489 after 113 more fatalities – the lowest rate since lockdown began – The Sun
Up Next Family of Grand Princess passenger who died of coronavirus files suit against Carnival