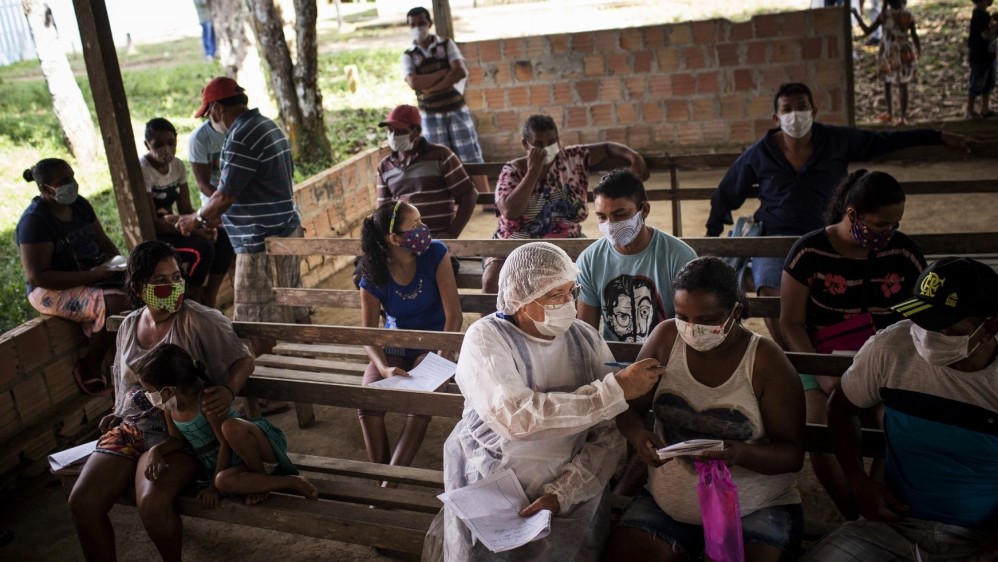 Latin America’s deaths topped 50,000 and cases neared 1 million, with countries such as Brazil, Chile, Mexico and Peru struggling to stem the tide, according to a Reuters tally.

Brazil has registered a record 33,274 new cases of the coronavirus, its health ministry said, raising the total to 498,440 in a country with one of the world’s worst outbreaks. The country’s death toll has increased to 28,834, with 956 new deaths in the last 24 hours, the ministry added.


A third member of a scientific advisory body to the British government has warned that it is too soon to lift the COVID-19 lockdown because the test and trace system is not yet fully operational.

More than 6.04 million cases of coronavirus have been confirmed around the world, according to data from Johns Hopkins University. Some 368,000 people have died, including more than 103,000 in the US, while at least 2.4 million have recovered.

Romania’s prime minister has paid fines totaling about $600 for smoking indoors and holding a meeting in a government building where several Cabinet ministers and other participants did not follow social distancing rules, AP news agency reported.

In a photograph published in Romanian media, Prime Minister Ludovic Orban and others can be seen smoking with food and bottles of alcohol on a table. No one in the photo wore a mask or maintained the required spacing.

Orban told the Mediafax news agency that the picture was taken on May 25, his birthday. The foreign minister and economy minister of Romania were among those attending.

China recorded two new confirmed cases of coronavirus on May 30, down from four the day before, Reuters news agency reported on Sunday quoting data from the country’s health authority.

Both cases were imported in the Chinese province of Shandong, the National Health Commission (NHC) said in a statement on its website. The NHC also confirmed three new asymptomatic cases, compared to four the day before.

With no new deaths reported, the death toll remained at 4,634. The total number of confirmed cases in the mainland as of May 30 stood at 83,001, data form NHC showed.

The country reported one additional death, bringing the total death toll at 270. The fatality rate was 2.35 percent. The total number of people released from quarantine after full recoveries stood at 10,405, up 7 from the previous day, with 793 people currently under treatment.

Mexico has reported 2,885 new cases of coronavirus and 364 more deaths, bringing the total numbers to 87,512 cases and 9,779 fatalities, according to data from health authorities.

The mayor of Colombia’s capital is planning to shut down one of the city’s largest neighbourhoods as cases there continue to rise.

Mayor Claudia Lopez said that starting June 1st the working-class Kennedy area – home to nearly 1.5 million people – will be under a strict quarantine.

Police and military will enforce the lockdown and no one will be allowed out, except to seek food or medical care or in case of an emergency.

Businesses like manufacturing that had been allowed to operate will be ordered closed. Lopez said that testing for the virus will be doubled. The area today has more nearly 2,500 cases and hospitals there are reaching maximum capacity.

Greek officials said Saturday said that the country would not limit incoming tourists to those from a list of 29 nations, but travellers from countries not on the list will be subject to mandatory testing on arrival and a period of quarantine depending on test results.

The policy will only be applied during the final two weeks of June, although Greek authorities left open the prospect of additional restrictions after that date.

Arrivals from 29 countries listed will be tested randomly. The list was drawn up based on a document from the European Union Aviation Safety Agency.

Disinfection teams swept Istanbul’s Grand Bazaar, and the resumption of domestic flights was announced as Turkey prepared to lift many remaining coronavirus restrictions.

Teams scrubbed the floors of the 15th-century bazaar, which has been closed since March 23, before Monday’s return to business. The transport minister said the first air routes between Istanbul, Ankara, Izmir, Antalya and Trabzon would restart Monday, with others following gradually.

On Saturday evening, Health Minister Fahrettin Koca announced 983 new cases of coronavirus during the previous 24 hours, taking Turkey’s total number of cases to 163,103. In a tweet, he said there had been 26 deaths from the virus over the same period, bringing the overall death toll to 4,515.

You can find all the updates from yesterday, May 30, here.

Don't Miss it Cemeteries braced for surge in Covid-19 dead as Mexico readies to reopen
Up Next As NSW COVID-19 restrictions ease on June 1, what is opening and changing?