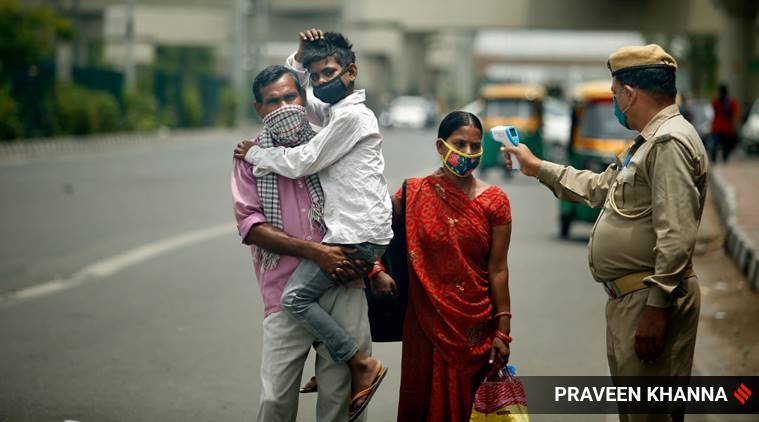 Private doctor’s clinic in Dharavi, which is one of the hotspots of the COVID-19 pandemic in Mumbai (Express photo by Prashant Nadkar)

Fifth phase of lockdown begins Monday. Here’s what you must know

This is actually not an extension of the full lockdown. The guidelines issued by the Ministry of Home Affairs say that the lockdown is being extended until June 30 only in containment zones. These containment zones will be demarcated by states, depending upon the severity of the coronavirus outbreak in an area. For areas outside of containment zones, this is the lifting of the lockdown in a phased manner.

Schools, colleges, coaching institutes, and other such educational institutions will open in July, after due consultations with parents and other stakeholders.

The Indian Railways have already announced that 100 pairs of trains will start running from Monday (June 1). Bookings for these trains are open, and you can book your seat/berth up to 30 days in advance.

This means that while you can go to the temple, you cannot join a religious procession in a festival. This, however, will be eased in Phase III of this unlocking, after due consultations with stakeholders.

Delhi is not the only state which has been less than transparent in reporting COVID-19 numbers.

Coronavirus numbers explained: Delhi not only state non-transparent with tally

For the second consecutive day, Delhi reported more than 1,000 new cases on Friday. It also added 82 deaths to its tally, only 13 of whom had died on Friday. The remaining deaths had happened earlier and so far had not been counted.

Earlier this month, a big discrepancy was noticed in the death numbers being put out by the Delhi government and the information available from the hospitals. After an initial attempt to explain the discrepancy as a result of the information gap between the different agencies, Delhi has been adjusting the previously unaccounted deaths in its tally.

But Delhi is not the only state which has been less than transparent in reporting COVID-19 numbers. Almost every other state has seemed reluctant in sharing information, especially those relating to the dead. West Bengal has already been in this situation earlier, having been forced to add deaths that were not being included in the tally.

Don't Miss it Coronavirus update: The latest COVID-19 news for Tuesday May 12 | ABC News
Up Next The New Reality: Future of shopping malls in jeopardy as COVID-19 pandemic pushes shoppers online – National