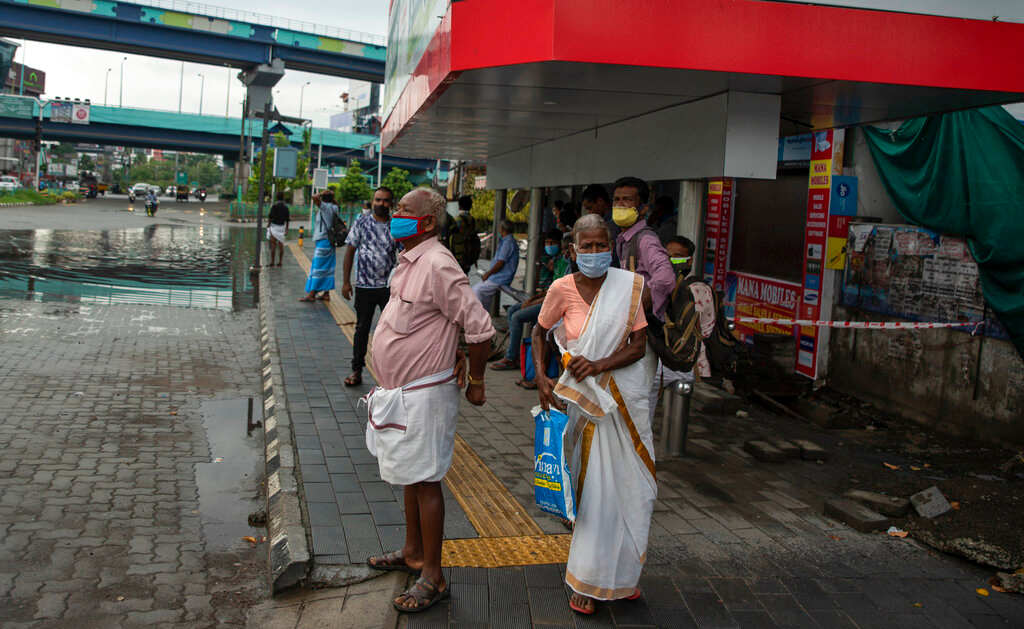 Coronavirus Outbreak LATEST Updates: Jharkhand has registered a total of 675 COVID-19 positive cases, including 374 active cases, so far, according to the latest data released by the state health department on Tuesday.

As many as five COVID-19 deaths were reported in the state while, 296 patients were cured of the viral infection.

Rajasthan registered 171 new COVID-19 cases and two deaths in the state till 10.30 am on Tuesday, according to the state health department. With this, the total positive cases stood at 9,271 while the toll was at 201.

We have taken decisions which will help the country in the long run. Reforms are not random, decisions are systemic, planned, integrated, inter-connected and futuristic process, said Narendra Modi.

Prime Minister Narendra Modi will deliver the inaugural address on ‘Getting Growth Back’ via a virtual online meeting at the annual session of the Confederation of Indian Industry (CII) at 11 am today. The prime minister’s address comes at a time when companies are resuming operations after the Ministry of Home Affairs (MHA) allowed relaxations amid lockdown.

India’s drug regulator has granted US pharma giant Gilead Sciences marketing authorisation for its anti-viral drug remdesivir for ‘restricted emergency use’ on hospitalised COVID-19 patients in view of the crisis posed by the pandemic.

Mizoram chief minister Zoramthanga​ on Tuesday said that 12 fresh coronavirus cases were reported in Zoram Medical College. On Monday, the state government extended the lockdown for another month till 30 June.

The decision was taken after continuous rise in COVID-19 cases, especially its neighbouring northeastern states and the return of a large number of stranded people from other states.

The number of confirmed coronavirus cases in India shot up to 1,90,535 and the toll rose to 5,394 on Monday as restrictions were eased in many states under the Unlock plan announced by the Centre.

The fourth phase of the nationwide lockdown imposed to control the spread of the coronavirus infection came to an end on Sunday and the country entered the first phase of the Unlock plan announced by the Centre, which allows various economic activities to resume.

Many states, in keeping with the Union home ministry’s guidelines, had over the weekend issued orders allowing reopening of shops, markets and resumption of inter-state travel, while continuing with strict restrictions in containment zones.

Globally, close to 43 percent people have recovered so far while nearly six percent have succumbed to the virus.

“A steady decline can be seen in the case fatality rate in the country. The relatively low death rate is attributed to the continued focus on surveillance, timely case identification and clinical management of the cases,” the ministry said.

In an exclusive interview with News18, home minister Amit Shah said that Prime Minister Narendra Modi has led a “successful” fight against the coronavirus pandemic with the support of all the state governments.

“Till now, 12.6 persons per lakh population in the country have been affected by COVID-19, which is far better than US, Brazil and other countries. India’s recovery rate is above 42 percent, according to the latest data,” he said.

He also defended the central government’s response to the migrant crisis, saying that the migrant workers hadn’t been sent to their home states immediately after the lockdown began as health systems in rural areas had to be strengthened.

Traffic snarls in some cities as shops, markets open

In Gujarat, life returned to near normal in many parts including in Ahmedabad, the state’s worst coronavirus-hit district, as several restrictions were eased. Roads bustled with traffic as people came out in large numbers to visit markets, which have been allowed to remain open till 7 pm in all areas except in containment and micro-containment zones.

In Ahmedabad, a limited number of city buses also began plying with 50 percent seating capacity to maintain social distancing, while auto rickshaws hit the roads for the first time in ten weeks.

In Kolkata, people came out on the streets in large numbers, while traffic snarl was noticed at many places following the lockdown relaxations. Some religious places also reopened for worship by the people, which was also the case in various other states.

In the National Capital, Chief Minister Arvind Kejriwal on Monday announced reopening of barber shops and salons, among various other relaxations, but said spas will remain closed for now. A complete lockdown in containment zones will continue till 30 June.

Commuters move through a road in Ahmedabad as shops, markets are opened. AP

Kejriwal also said there will be no restrictions on the number of people travelling in four wheelers, two wheelers, auto-rickshaws, e-rickshaws and other vehicles in the city.

While all shops in markets have been permitted to function, they can be closed by authorities if social distancing guidelines are not followed, according to a government order.

Fresh orders would be issued later for further relaxations from 8 June as per the guidelines issued by the Union Home Ministry.

Kejriwal, however, said Delhi’s borders with Haryana and Uttar Pradesh will be sealed for a week in the wake of rising coronavirus cases in the city and sought suggestions from the people by Friday to reopen them.

At the Delhi airport, authorities have set up a dedicated area at the entry point of its parking zone to ensure cabs coming there to pick up passengers are thoroughly sanitised.

While domestic flights have begun in a phased manner, the international flights would be allowed only in the third phase of unlocking, though no dates have been decided so far.

Civil Aviation Minister Hardeep Singh Puri said several factors like restrictions in metro cities and the ban imposed by various countries on the entry of foreigners need to be addressed before resuming international passenger flights.’

Aviation regulator DGCA separately asked airlines to keep middle seats vacant to the extent possible in the wake of the coronavirus outbreak. If a flyer has been allotted the middle seat due to a high passenger load, then additional protective equipment like a wrap-around gown must be provided to the passenger in addition to a three-layered face mask and face shield, the DGCA said.

Even as curbs were eased in many states, the coronavirus numbers continued to rise, with states including Maharashtra, West Bengal and Andhra Pradesh reporting new cases and fatalities.

Maharashtra  saw the number of cases rising by 2,361 on Monday to reach 70,013, while the death toll rose by 76 to 2,362, the state health department said. In Nagpur, at least 12 customers of a barber, who is a resident of a containment zone, have been quarantined, after it was found that the barber had tested positive for coronavirus infection.

More than 100 doctors and nurses from Kerala will join the medical staff at some Mumbai hospitals to help them in the battle against COVID-19 pandemic.

West Bengal reported eight more fatalities to take its death toll to 253, while the number of cases rose to 5,722 after 271 more people tested positive in the last 24 hours.

In neighbouring Odisha, the number of positive cases rose to 2,104 after a record number of 156 cases were detected during the day. Of these, 153 were detected at various quarantine centres, while three others were found positive during COVID-19 contact tracing.

In Kerala, 57 new cases were reported, 55 of whom had come from abroad and other states, taking the state’s infection tally to 1,326. More than 1.39 lakh people are under observation in the state.

Madhya Pradesh recorded 194 new COVID-19 cases, including 53 from worst-hit Indore, and eight deaths, taking the overall case count to 8,283 and fatalities to 358.