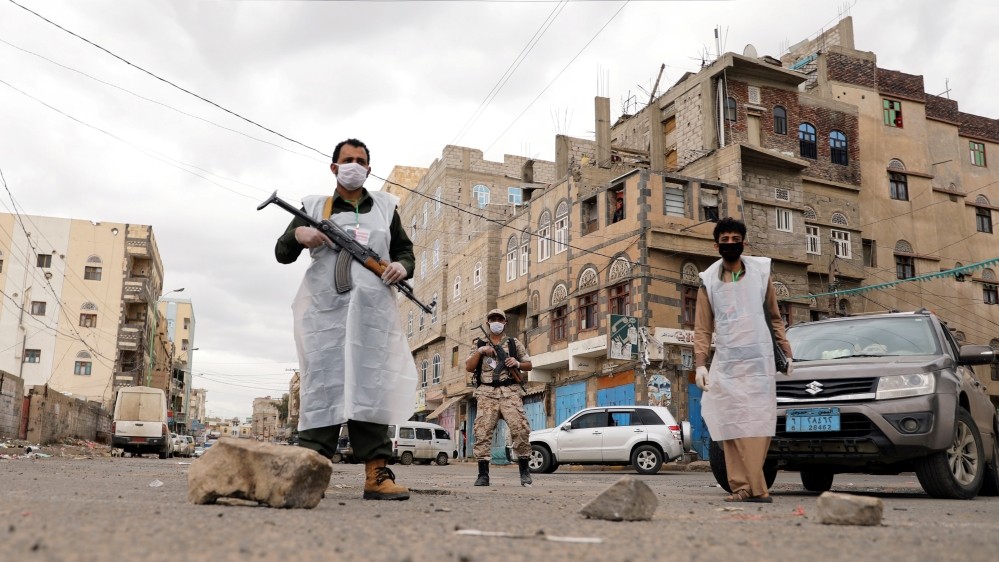 Millions of people are at risk from a “tragedy” fuelled by the coronavirus in Yemen, an international UN-backed pledging conference is expected to hear on Tuesday.


Health authorities in Spain have reported no new deaths from the coronavirus in the last 24 hours for the first time in nearly three months.

Singapore has begun to relax its ‘circuit breaker’, allowing some children returning to school and about three quarters of businesses resuming work.

More than 6.25 million coronavirus cases have been confirmed around the world, according to data from Johns Hopkins University. More than 375,000 people have died, including more than 105,000 in the US. At least 2.69 million have recovered from the disease.

Hong Kong has discovered four new cases of coronavirus and is concerned about a ‘super spreader’ at the housing estate where all the affected people live, according to the South China Morning Post.

The four people diagnosed with the virus are all neighbours of a 34-year-old woman who worked at a warehouse distribution centre and was found to have the coronavirus on Sunday. Her husband, two co-workers and the paramedic who took her to hospital have all been confirmed with the virus too.

“There may be super spreaders spreading the virus in the building,” the newspaper quoted Professor Yuen Kwok-yung, a microbiologist at the University of Hong Kong, as saying. “Initial investigations believe that greatest chance of spreading is from public facilities.”

Yuen was one of the experts sent to inspect the building.

The state of New South Wales, home to a third of Australians, is to open some sports facilities from the middle of June.

Gyms, indoor swimming pools and saunas will be allowed to reopen from June 13 and children’s community sport can start from July 1.

“Sport is in the DNA of everyone in Australia,” NSW Sport Minister Geoff Lee told reporters in Sydney. “It’s important not only for the mental wellbeing but for their physical fitness.”

Singapore has begun to ease some of the so-called circuit breaker measures it introduced in March.

Some children are returning to school, about three-quarters of businesses have been allowed to reopen and restrictions on gathering eased to allow families to meet and small-scale religious services to take place.

The city state has the highest number of confirmed coronavirus cases in Southeast Asia, more than 90 percent of them among the more than 300,000 people brought from overseas to work in construction and other industries and housed in crowded worker dormitories.

The government on Monday announced new regulations for dormitories to improve facilities and give the men more space.

New standards being piloted in quick-build dormitories to house migrant workers in #Singapore. Living space for each individual is increased, reducing the number of men in a room and increasing the number of toilet and bathroom facilities available. https://t.co/ocTBYScjay pic.twitter.com/MkNHc60L4Z

Dr Hu, whose face became darker during his treatment as a result of liver problems, was previously reported to have recovered. The Global Times said he had been treated with Polymyxin B, an antibiotic usually used for meningitis and sepsis.

Hu Weifeng, a #Wuhan doctor who was ailing with #COVID19, passed away Tue after 4 months of treatment, media reported. His face had turned black, presumably due to the use of polymyxin B. pic.twitter.com/lRVHODSNSC

South Korea will impose a new quick response (QR) code system to keep track of visitors to higher risk venues after a spike in coronavirus cases linked to a nightclub.

From June 10, visitors to clubs, bars, karaoke spots, indoor gyms and other entertainment venues will need to register with a QR code. The individual’s information will be logged in a database kept by the Social Security Information Service for four weeks before it is deleted. The system is currently being tested at 17 venues.

Masks and social distancing can help control the coronavirus but hand washing and other measures are still needed, a new study has found.

Researchers concluded single-layer cloth masks are less effective than surgical masks, while tight-fitting N95 masks provide the best protection, according to the study published in the medical journal, The Lancet.

A distance of one metre (more than 3 feet) between people lowers the danger of catching the virus, while two metres (about 6 1/2 feet) is even better.

Eye protection such as eyeglasses or goggles can also help.

00:00 GMT – Millions in Yemen at risk from unfolding coronavirus-fuelled ‘tragedy’

The UN is appealing for $2.41bn to continue its humanitarian programmes in Yemen until the end of the year to prevent an unfolding “tragedy” driven by the coronavirus.

The UN and its partners have been providing humanitarian aid to some 10 million people a month as a result of the five-year conflict in the country.

Yemen reported its first case of coronavirus in April. The UN says initial findings from intensive care units suggests 20 percent of those treated after being confirmed with the virus are dying, compared with a global average of 7 percent.

Brazil’s Health Ministry has reported some 11,598 new cases of coronavirus and 623 deaths over the past 24 hours.

Brazil has the second-highest number of cases in the world (526,447) after the United States. Nearly 30,000 people have died from the disease.

New York’s Metropolitan Opera will reopen only for its traditional New Year’s Eve performance, cutting short its 2020/2021 season because of the coronavirus.

The 137-year-old company, one of the world’s leading opera houses, had planned to start its season in September.

Due to the ongoing health crisis, we have made the difficult decision to cancel the first few months of the 2020–21 season. We expect to re-open our doors on December 31, 2020.

Read all the updates from yesterday (June 1) here.