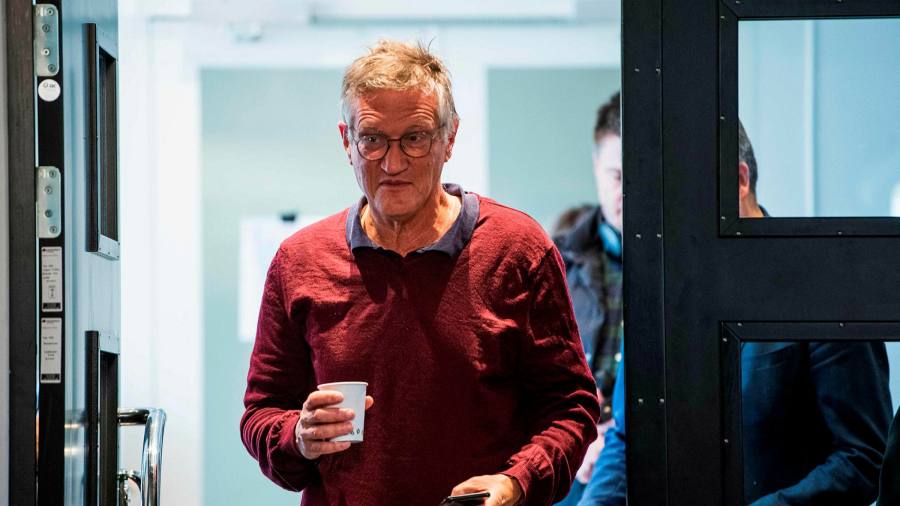 The architect of Sweden’s controversial lighter lockdown policy for dealing with coronavirus has for the first time conceded the Scandinavian country should have imposed more restrictions to avoid having such a high death toll.

Anders Tegnell, Sweden’s state epidemiologist, agreed with the interviewer on Sveriges Radio that too many people had died in the country.

“If we would encounter the same disease, with exactly what we know about it today, I think we would land midway between what Sweden did and what the rest of the world did,” said Mr Tegnell in the interview broadcast on Wednesday morning.

Mr Tegnell’s admission is striking as for months he has criticised other countries’ lockdowns and insisted that Sweden’s approach was more sustainable despite heavy international scrutiny of its stubbornly high death toll.

Sweden’s centre-left government on Monday said it would appoint a commission to investigate the country’s approach to coronavirus before the summer, bowing to pressure from opposition politicians.

The public mood in Sweden appears to have shifted somewhat since neighbouring Norway and Denmark last week opened their borders to each other but not their close neighbour. Sweden has reported a much higher death toll relative to its population size than Norway.

Mr Tegnell said in the interview: “There is quite obviously a potential for improvement in what we have done in Sweden. It would be good to know exactly what to close down to better prevent the spread of the virus.”

He added that because nearly all other European countries locked down suddenly, it was difficult to know which measures worked best. Sweden kept its schools for under 16s open, a policy that health authorities in Norway and Denmark now think wise. It also kept its borders open to European visitors and relied on public co-operation rather than formal rules for social distancing.

Mr Tegnell insisted later on Wednesday that Sweden’s strategy was still good and that it would stick to it, though he conceded there was always room for improvement.

The Swedish public has strongly backed Mr Tegnell’s approach but politicians and diplomats said they sensed a change in mood in recent days.

“Every week that goes by, the public discussion grows about the measures that have been taken or not,” said Hans Wallmark, a centre-right opposition MP.

He said the public were dismayed by three things: the high death toll in care homes that makes many people “almost ashamed”; the failure to deliver a mass testing scheme for Covid-19; and the closed borders for Swedes. “All those things are leading to a more critical discussion among Swedes,” he added.

A former senior Swedish diplomat said: “We have had a very deep and intimate Nordic co-operation in a great many aspects. People are not very happy that our close Nordic neighbours are closing their borders to us, and they are feeling worried and concerned that our strategy seems to have led to the worst kind of results.”

Sweden’s diplomatic isolation in the Nordics has coincided with a more critical tone from Swedish media.

“In the short run, it might be fair to say that Sweden is isolated. The general tone of people and the press is that they are more critical. The general public is waking up to the fact that neighbouring countries and others are critical,” said a European diplomat in Stockholm.

Sweden has had 4,468 Covid-19 deaths whereas Denmark and Norway, each with about half their neighbour’s population, have had 580 and 237, respectively. Both Copenhagen and Oslo said the higher infection rate in Sweden was behind their decision not to open their borders to Swedes.

Carl Bildt, the former centre-right Swedish prime minister, said: “It is disturbing that Swedes are considered somewhat more unsafe than others in our part of Europe.” He pointed to particular anger in the southern region of Skane, which is connected to Denmark by the Oresund bridge from Malmo to Copenhagen and where the infection rate is far lower than in Stockholm.

“I guess they feel to be punished for policies decided in a faraway capital up north,” Mr Bildt added.

Sweden has open borders to all EU and Norwegian citizens, and thousands of Danes streamed over the bridge to visit their summer cottages in Skane this Whitsun weekend. On Tuesday, Danish police reported 3km tailbacks on the bridge as Danes queued to return home.

Mette Frederiksen, Denmark’s centre-left prime minister, has said that her country is in talks to look at opening up to individual Swedish regions such as Skane, while Oslo is also holding talks with Stockholm about a potential opening up.

Mr Wallmark, whose constituency is in Skane, said that Swedes in border regions take the closed frontiers personally.

“The risk is that it feeds a feeling that we need countermeasures against them,” he said. “People are saying, especially in my constituency, ‘If we can’t go to Copenhagen, then why can the Danes come to Malmo?’ In the long run, it’s a really bad sentiment that goes against deepening co-operation and trust in the Nordic region.”

The centre-left government in Stockholm has been left weakened by the Norwegian and Danish decisions after weeks of pleading for Nordic co-operation in opening borders. But the direct effect may be limited as Sweden’s official advice is to avoid foreign travel or journeys of more than one or two hours.

Mikael Damberg, Sweden’s interior minister, told public broadcaster SVT that although Stockholm was hard hit, the border regions with Norway or Denmark had lower infection rates than on the other side. “There are pretty weak arguments for having closed borders, as it looks now,” he said.

Italy’s ambassador to Stockholm became only the latest European diplomat to express displeasure at the tendency of Mr Tegnell to compare Sweden favourably with other countries — in this case by saying it should “manage this better” than Rome.

“Tegnell has been very high-handed in his comments about other countries, and that’s not endeared him to others,” said the former Swedish diplomat, who also pointed out that his country appeared isolated in the EU when it had been one of the few countries not to send any help to Italy at the height of the pandemic.

Along with Denmark, the Netherlands and Austria, the other members of the so-called Frugal Four, Sweden is under pressure over its opposition to a €750bn recovery fund announced by the European Commission last week.

Andreas Hatzigeorgiou, head of the Stockholm Chamber of Commerce, said he was worried that in the long term, measures to combat coronavirus would lead to “protectionism or even isolationism”. He added: “Cross-border mobility, free trade and human exchange may have contributed to the spread of Covid-19, but an economic reboot will require opening up to foreign trade and international visitors sooner rather than later.”

Don't Miss it Boris Johnson told Italy’s prime minister the UK had been aiming for coronavirus herd immunity, new documentary reveals
Up Next Swiss citizens abused by their own government | Focus on Europe