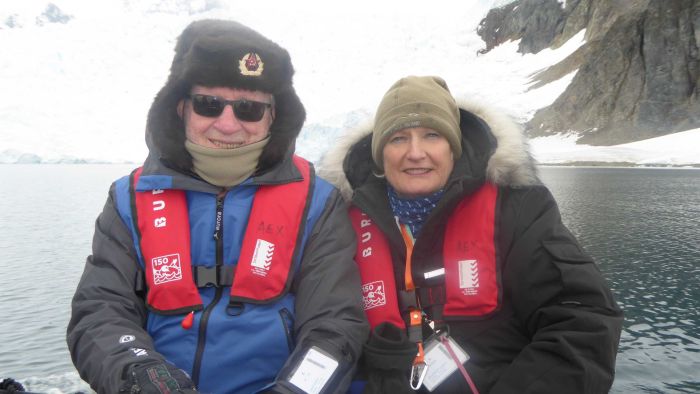 Bev and John Kable’s bucket list cruise to the Antarctic didn’t go the way they planned, but it could have been much worse.

Key points:The latest research suggests about 15 per cent of people with COVID-19 will never develop symptomsThe Australian research team also found people without symptoms are less likely to spread the illnessAnother study found staying more than a metre from an infected individual reduces the transmission risk to 3 per cent

The Sydney grandparents’ sightseeing was cut short and the ship stranded off the coast of Uruguay after a crew member became unwell in March.

Everyone on board was tested for coronavirus, including the couple.

John Kable was slightly concerned as he was in his late 70s, a high-risk age group.

“I’ve always had a little bit of a weak chest but I didn’t have any symptoms, so I guess I wasn’t overly worried,” he said.

They said they both felt perfectly healthy, so the couple was stunned to learn they both had COVID-19.

“I thought, how can that be?” Mrs Kable said.

“We hadn’t had a thing wrong with us, nothing.”

Bev and John felt perfectly healthy during their holiday.(Supplied)

Passengers on the ship were already in lockdown.

But the Kables were regular travellers and weren’t fazed by the diagnosis.

“Everything’s an experience, isn’t it?” Mrs Kable said. “We weren’t feeling bad, so why cry now? We were quite happy.”

Married for more than 50 years, the couple spent two-and-a-half weeks in their cabin.

“Reading our iPads or books or watching a bit of TV or just pottering around doing a little bit of marching up and down in the cabin.”

The couple spent another two weeks in hotel quarantine in Melbourne before they tested negative to coronavirus and were allowed to return home.

John Kable was isolated in his cruise ship cabin with his wife for more than two weeks.(Supplied)COVID-19 symptoms never develop for some

Researchers now believe about 15 per cent of people who contract COVID-19 will never show any symptoms, like the Kables.

Bond University medical professor Paul Glasziou, along with colleagues from the universities of Sydney and NSW, compared data from nine international studies to determine what proportion of people with COVID-19 were likely to be asymptomatic.

“The concern has been that there may be some people without symptoms but [who] are infectious and are spreading it without knowing it,” Professor Glasziou said.

Some studies had previously suggested almost half of people with COVID-19 didn’t show symptoms, but the review by the Australian team found the rate was much lower.

“About one in six or one in seven will not have any symptoms for the whole of the illness,” Professor Glasziou said.

Fortunately, the scientists also found people who did not have symptoms were about a third less likely to spread the disease.

“The reason for that is you’re not sick as long, and also you’re not doing things like coughing or sneezing,” he said.

The researchers looked at what happened to more than 20,000 people in six countries, including China, the US and Italy.

Professor Glasziou said the results confirmed testing and contact tracing were vital for slowing the spread of COVID-19.

“The better our isolation, testing and quarantining processes are at picking up those asymptomatic or mild people, the less restrictions we will need.”

UNSW biosecurity professor Raina MacIntyre said COVID-19 was “a very challenging infection to control because you can’t identify who is potentially infectious”.

“You go to a restaurant, you go to a gym, you go to a protest, you don’t know whether the person next to you is infected or not, and they may not know either.”

Professor MacIntyre said high-risk groups such as nursing home residents, prisoners and frontline health workers should be tested as soon as there was an outbreak — regardless of whether they had symptoms — to prevent a resurgence of COVID-19.

People without symptoms may also be in the ‘presymptomatic’ stage of COVID-19, before symptoms develop.

“The highest amount of infectiousness that you have is in the two days before you develop symptoms,” Professor MacIntyre said.

John and Bev Kable are pleased to be able to get back outside — and so is Jock.(ABC News: Brendan Esposito)

The findings of the study, and another study commissioned by the World Health Organization and published in The Lancet medical journal, reinforce the importance of physical distancing.

Analysis from previous studies involving almost 8,000 people suggested staying between 1 and 2 metres from an infected person reduced the risk of infection to 3 per cent.

But being less than a metre from an infected person increased the transmission risk to 13 per cent.

Mr and Mrs Kable said while the experience had not put them off travelling, they were wary of the silent spread of the virus.

“I say to everybody that I speak to that if you don’t have symptoms … you don’t know, the person next to you could still have the virus,” Mrs Kable said.

“So beware, because it’s so invisible, it’s so dangerous.”

Don't Miss it Covid-19 news: NHS Test and Trace not tracing enough to be effective
Up Next Does Vitamin D Help Fight COVID-19?