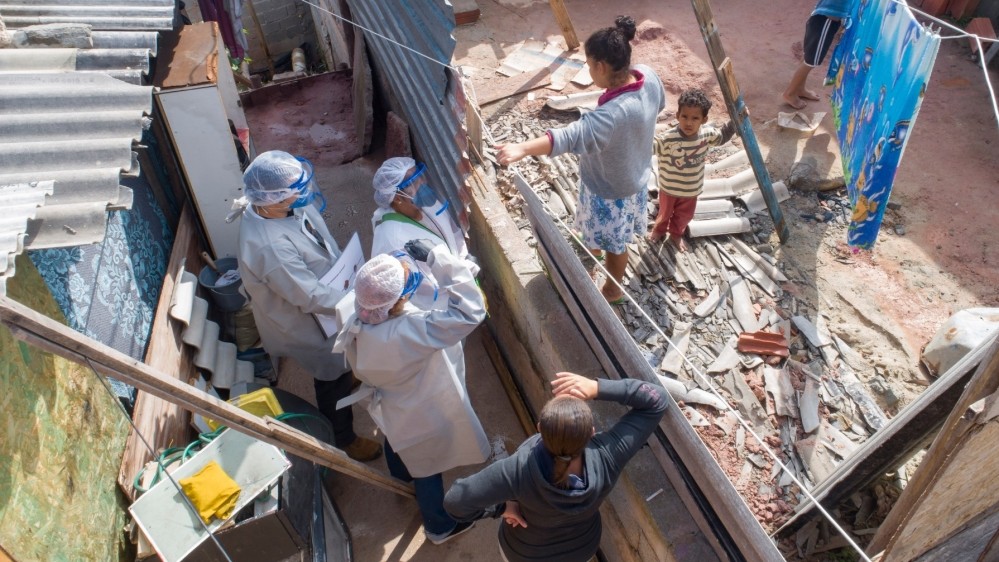 The coronavirus death toll in Brazil and Mexico soared to new daily record, with 1,349 and 1,092 confirmed fatalities, even as the country begins to ease lockdown restrictions. Brazil now has more than 32,000 deaths, while Mexico has over 11,000.


At least two US senators have accused China of hiding data from the World Health Organization that could have altered the course of the coronavirus outbreak, even as a Chinese official denied delays in sharing information and said the government acted openly and transparently.


The malaria drug, hydroxychloroquine – which President Donald Trump took to try to prevent COVID-19, proved ineffective for that purpose in the first large, high-quality study to test it in people in close contact with someone with the disease, according to a study published by the New England Journal of Medicine.

Around 6.5 million coronavirus cases have been confirmed around the world, according to data from Johns Hopkins University. More than 386,000 people have died, including some 107,000 in the US. More than 2.7 million have recovered from the disease.

Canberra Airport has opened a register for travelers interested in flying from the Australian capital to New Zealand on July 1 in a proposed resumption of international travel, AP news agency reported.

Canberra Airport managing director Stephen Byron said the proposal to restart travel between the two countries with flights connecting the capitals was under discussion between the two governments as well as Qantas and Air New Zealand.

Under the proposal, the flights between Canberra and Wellington would not require quarantine of passengers. Canberra Airport opened its register of interest on Thursday for the first flight on July 1 and 140 names were added within the first hour.

Economic hardships brought about by the coronavirus pandemic could increase aid-dependency in countries at conflict without coordinated responses from governments and international institutions, the International Committee of the Red Cross (ICRC) said on Thursday.

“The ongoing economic and food security impact of COVID-19 is massive and appears likely to worsen over time,” it added, after releasing a survey on the effects of the pandemic.

In Nigeria for example, 95 percent of people surveyed said their livelihoods have suffered because of the pandemic, resulting in reduced salaries or revenue. In Iraq the number was 83 percent, and 52 percent in Libya.

Tokyo Governor Yuriko Koike said on Thursday it may be necessary to a stage a “simplified” Olympics next year due to the impact of the COVID-19 pandemic and that organisers were already discussing possible changes.

“Holding the Olympic and Paralympic Games calls for sympathy and understanding of Tokyoites and the Japanese people,” Koike told reporters.

Koike’s comments come after the Yomiuri newspaper reported that various options, such as mandatory coronavirus testing and having fewer spectators, were being considered by organisers.

John Coates, the head of the International Olympic Committee’s (IOC) inspectorate for Tokyo, has said a lack of a defence against the new coronavirus threatened the Games and organisers had to start planning for what could be a “very different” Olympics if there were no signs of COVID-19 being eradicated.

North Macedonia has reintroduced stringent movement restrictions in the capital Skopje and another three parts of the country, after registering a record number of new COVID-19 infections, according to AP news agency.

Health Minister Venko Filipce said an almost blanket curfew will be imposed from 9 pm (local time) on Thursday till 5 am (local time) on Monday in these areas. People will be allowed out to visit hospitals or pharmacies.

The health ministry said 101 new infections – a record since the country’s first case in late February   and four deaths were recorded in the previous 24 hours. That brings the total of infections to 2,492, with 145 deaths.

An infant, who contracted the coronavirus disease and later recovered, has died in the Philippines.

According to an ABS-CBN report on Thursday, Kobe Manjares became infected of the disease, also known as COVID-19, five days after he was born on April 12. He was released from the hospital on April 8.

He was later brought back to the hospital due to complications, including blood infection and bloated stomach, ABS-CBN quoted his father as saying. The infant died early on Thursday.

The Philippines has reported more than 19,000 coronavirus cases and 974 deaths as of Wednesday.

The Philippines has reported more than 19,000 coronavirus cases and 974 deaths as of June 3 [Rolex dela Pena/EPA]

South Korea has confirmed 39 additional cases of the coronavirus, all but three of them reported in the densely populated Seoul metropolitan area as authorities are struggling to contain a resurgence of the COVID-19.

AP news agency quoted the Korea Centers for Disease Control and Prevention as saying that the newly reported cases raised the country’s total to 11,629 with 273 deaths.

The agency says 10,499 of them have recovered while 857 remains in treatment for the virus.

Brazil registered a record number of daily deaths from the novel coronavirus for a second consecutive day, according to the latest data from the Health Ministry, even as city and state authorities move aggressively to open commerce back up.

President Jair Bolsonaro has repeatedly downplayed the threat of the virus, saying on Tuesday that death was “everyone’s destiny.”

New Zealand is on the verge of eradicating the virus from its shores after it notched a 13th straight day with no reported new infections, the Associated Press news agecy reported.

Only a single person in the nation of 5 million people is known to still have the virus, and that person is not hospitalized. However, it remains likely that the country will import new cases once it reopens its borders, and officials say their aim remains to stamp out new infections as they arise.

The country has already lifted many of its virus restrictions and could remove most of those that remain, including limiting crowd sizes, next week. Just over 1,500 people have contracted the virus during the outbreak, including 22 who died.

The coronavirus toll in Mexico soared to a new daily high, with the health department reporting 1,092 test-confirmed deaths – more than double the previous one-day record and in line with numbers in the United States and Brazil, according to AP news agency.

The announcement was an embarrassment for officials, who have consistently predicted that cases in Mexico were about to start leveling off. The country began a gradual re-opening of industrial and business activity Monday.

The coronavirus pandemic has killed more than 11,000 people in Mexico as of the end of Wednesday [File: Jorge Nunez/EPA]

01:03 GMT – 9-month-old among new fatalities of coronavirus in US

A 9-month-old who tested positive for COVID-19 was among eight more people whose deaths were related to the coronavirus in the US state of Kentucky, Governor Andy Beshear has announced.

The latest deaths raised the statewide death toll to 450 since the pandemic began. There are more than 107,000 fatalities across the US.

In announcing the infant’s death, Beshear said: “Far too often, people think that it’s something that only happens to medically compromised seniors. This is a reminder of how deadly this virus can be. How precious all of our lives are.”

China reported on Thursday one new coronavirus case and four new asymptomatic COVID-19 cases as of the end of June 3, according to Reuters news agency quoting the health commission.

The National Health Commission said all five of the cases were imported, involving travellers from overseas. For June 2, China reported one confirmed case and 4 asymptomatic cases.

China does not count asymptomatic patients, those who are infected with the coronavirus but do not exhibit symptoms, as confirmed cases. The total number of infections in China stands at 83,022. The death toll remained unchanged at 4,634.

At least two US senators said that China hid data from the World Health Organization (WHO) that could have altered the course of the coronavirus outbreak, even as a Chinese official denied delays in sharing information and said the government acted openly and transparently.

They were referring to an Associated Press investigation published this week that found China stalled on providing critical coronavirus information to WHO, which expressed considerable frustration in private even as it praised the country in public. Politicians said the report raised key questions, and public health experts said it shed light on a story that has become highly politicised.

At a press briefing on Wednesday, Zhao Lijian, a spokesman for China’s Ministry of Foreign Affairs, called the AP report “seriously inconsistent with the facts”. He read off a timeline of events that did not contradict the AP’s findings and added that China had always maintained “close and good communication and cooperation with WHO.”

A malaria drug US President Donald Trump took to try to prevent COVID-19 proved ineffective in the first large, high-quality study to test it in people in close contact with someone with the disease, AP news agency reported.

Results published by the New England Journal of Medicine show that hydroxychloroquine was no better than placebo pills at preventing illness from the coronavirus. The drug did not seem to cause serious harm, though – about 40 percent on it had side effects, mostly mild stomach problems.

“We were disappointed. We would have liked for this to work,” said the study leader, Dr David Boulware, an infectious disease specialist at the University of Minnesota. “But our objective was to answer the question and to conduct a high-quality study,” because the evidence on the drug so far has been inconclusive, he said.

Read all the updates from yesterday (June 3) here.

Don't Miss it The Curve: Latest data analysis from the coronavirus pandemic, May 10 | ABC News
Up Next Silver Lake’s coronavirus bets: a make-or-break moment for Egon Durban