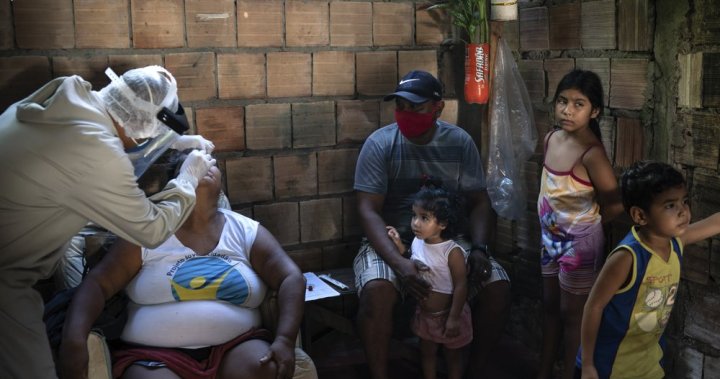 The United Nations and the International Red Cross and Red Crescent Movement are urging that governments and others unite in developing a “people’s vaccine” to protect everyone against the coronavirus.

Their appeal came ahead of a vaccine summit in London organized by the Global Vaccine Alliance that is seeking to mobilize billions of dollars of funding for a COVID-19 vaccine.

The “people’s vaccine” should protect the affluent, the poor, the old and young, said a statement by the U.N. and the International Red Cross and Red Crescent Movement. That is a “moral imperative that brings us all together in our shared humanity,” it said.

It said the pandemic is also raising risks of other diseases as it disrupts childhood immunization programs, leaving at least 80 million children under the age of one at risk of diseases like measles, diphtheria and polio.

The urgency of finding a way to stem outbreaks was evident as India on Thursday reported yet another record number of new infections, at 9,304, with 260 deaths in the previous 24 hours.

India’s tally of COVID-19 fatalities surpassed 6,000 and its number of infections has risen to nearly 217,000, the Health Ministry said. That makes India the seventh worst hit by the pandemic.

Neighbouring Pakistan reported over 4,000 new cases and said 82 more people had died, raising its death toll to 1,770. On Thursday, as many as 901 COVID-19 patients were listed in critical condition in Pakistan hospitals.

The spike in infections comes weeks after Prime Minister Imran Khan overrode warnings from experts and eased a lockdown. Officials have blamed the public for not adhering to social distancing regulations.

As countries such as New Zealand and Australia mark progress in containing the pandemic and work on plans to resume some international air travel, others are having to step up precautions.

North Macedonia reintroduced stringent restrictions on movement in its capital, Skopje, and three other areas after confirming 101 new infections as of Thursday.

In the U.S., where a wave of protests is adding to concerns over possible additional outbreaks, new cases of the coronavirus have been surging just weeks after many businesses were allowed to reopen.

1:52
Global calls for unity as U.S. cuts ties with WHO

Global calls for unity as U.S. cuts ties with WHO

Arizona officials reported nearly 1,000 new cases Wednesday amid a surge in hospitalizations, a little over two weeks after Gov. Doug Ducey ended his stay-at-home order. The state has now tallied more than 22,000 cases and 981 deaths.

Utah’s state epidemiologist issued a renewed plea Wednesday for people to maintain social distancing and exercise caution after state figures showed an average of about 200 new cases a day last week, the highest weekly average by far since the pandemic began.

South Carolina has logged its three highest daily case counts in the past week. The two highest death counts have occurred in the last week _- 20 deaths on May 27 and 17 deaths on Wednesday.

The percentage of positive tests averaged over 14 days and 28 days are both rising, which health officials use to determine if the spread of the virus is under control.

As of Thursday, more than 6.5 million people worldwide have been confirmed infected with the coronavirus and more than 386,000 have died, according to data compiled by Johns Hopkins University. The actual number of infections is thought to be much higher, due to limits on testing and many asymptomatic cases.

Both in the U.S. and around the world, it is the poorest and most vulnerable who have been the hardest hit, U.N. Secretary-General Antonio Guterres said in a video message.

3:59
George Floyd protests: How to stay safe while demonstrating during the coronavirus pandemic

George Floyd protests: How to stay safe while demonstrating during the coronavirus pandemic

The millions of people on the move including those forced to flee their homes because of violence or disaster and migrants “face three crises rolled into one,” he said.

A health crisis in conditions where social distancing is “an impossible luxury” and health care, water and sanitation are often hard to find is made worse by their economic plight and by pandemic-related restrictions on movement, he said.

Fear of COVID-19 has also led to “skyrocketing xenophobia, racism and stigmatization” and greater risk of gender-based violence, Guterres said.

He urged governments “to remove unwarranted barriers” for people on the move and ensure that they are given COVID-19 testing, treatment and vaccines because “no one is safe until everyone is safe.”