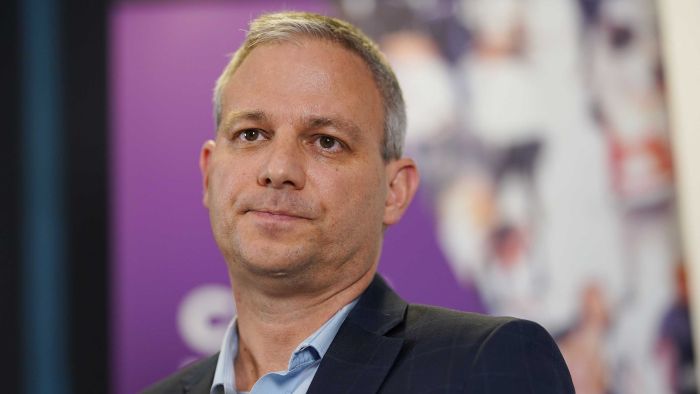 Victoria’s Chief Health Officer has warned Melbourne’s north and west are emerging as “hotspots” for coronavirus, as police say fines will be issued to the organisers of a Black Lives Matter protest this weekend due to the breach of physical-distancing directives involved.

Key points:Three more people have been diagnosed with coronavirus overnight taking the state’s toll to 1,681Chief Health Officer Brett Sutton has called on people once again to stay away from a planned protest this weekend expected to draw in thousandsOne of the organisers of the Black Lives Matter protest said everything would be done to manage risk during the demonstration on Saturday

The two other cases were from people in hotel quarantine.

He encouraged everyone in those suburbs to be vigilant about noticing symptoms of coronavirus and getting tested.

“So right from Keilor Downs, through Fawkner to Craigieburn, this is where, in the last couple of weeks, we’ve seen community cases,” he said.

“I want to specifically emphasise these areas of Melbourne appear to be the hotspots at the moment.”

Victoria Police Deputy Commissioner Shane Patton says the organisers of a Black Lives Matter protest planned for tomorrow will be fined if the protest breaches the directives of the Chief Health Officer.

Thousands of people are expected to attend a planned protest in Melbourne on Saturday, which has been organised by members of Victoria’s Aboriginal communities in response to the alleged murder of African-American George Floyd by a white police officer in the US.

Deputy Commissioner Patton, who will take the reins as chief commissioner at the end of this month, said he did not want the protest to go ahead.

Space to play or pause, M to mute, left and right arrows to seek, up and down arrows for volume.WatchDuration: 6 minutes 12 seconds6m Victoria’s Deputy Chief Commissioner Shane Patton says protest organisers will likely be fined.

“Clearly there are thousands of people who have registered interest in going tomorrow, we have been working with the organisers of this and told them we don’t want this to occur,” he said.

“If it does go ahead we will probably have to apply a lot of discretion because we can’t issues thousands and thousands of infringements to people.

“We will be issuing infringements to the organisers if it goes ahead and it’s greater than 20 people, in breach of the directives by the Chief Health Officer.”

Latest information from the Victorian Government

Under current laws, people can only gather inside or outside in groups of up to 20.

Deputy Commissioner Patton said “people have to be held to account for their actions” and fines would be issued, as they had been at other recent protests.

“These rules are in place for a reason and we have to make the point that moving forward there are ramifications, you cannot do this.”

His warning came after Prime Minister Scott Morrison called for people to stay away from protests and “find a better way” to show their support for the global Black Lives Matter movement.

“I understand the passions people will have in relation to this and the desire to protest, but my focus has always been on the health and wellbeing of people,” he said.

“I would not want people to be exposed and bring it back to their families and communities.”

Victorian Chief Health Officer Brett Sutton said while he would prefer people did not attend the protest, he encouraged all protesters to wear a mask and use hand sanitiser.(AAP: Stefan Postles)

Professor Sutton acknowledged the precautions people were taking such as wearing masks and using hand sanitiser, but said the protest remained a risk.

“That’s why I would reinforce that now is not the time to be in a mass-gathering setting.”

Premier Daniel Andrews yesterday said the “tough decision” was made by Victoria Police to reduce the risk of “inflaming” the protester’s concerns about police brutality.

Fines have been issued at other demonstrations, including an anti-lockdown protest attended by many anti-vaccine and anti-5G conspiracy theorists and an earlier demonstration against refugees in detention.

Coronavirus update: Follow all the latest news in our daily wrap.Protest organisers urge facemasks, hand sanitiser and self-isolation after event

One of the organisers of the Melbourne demonstration said she would “feel pretty bad” if there was a spike in cases after the event, but those behind the rally were doing everything they could to minimise the risk.

Gunnai and Gunditjmara woman Meriki Onus, a member of Warriors of the Aboriginal Resistance, told ABC Radio Melbourne they would rather not be protesting during a pandemic.

“And we think this is an essential service to stand up for an Aboriginal person’s right to life, and also stand in solidarity with George Floyd and the broader Black Lives Matter in the US.”

Ms Onus said the organisers had been working with health professionals to give out masks and hand sanitiser to attendees in the lead-up and would be giving out supplies on the day.

Digital flyers for the event have urged people to keep 1.5 metres apart and to self-isolate for a few weeks after the protest to reduce the risk of unknowingly spreading the virus.

“We’re doing everything we can to manage any risk,” she said.

Asked how organisers would feel if the virus spread at the rally, Ms Onus said “I would feel pretty bad”.

“Melbourne will be no different to any other city in this world in marching [for] Black Lives Matter.”

The three additional cases of COVID-19 confirmed overnight bring the number of cases in the state to 1,681.

Newbury Primary School in Craigieburn has been closed today, after a prep student tested positive to COVID-19 overnight.

“I believed they picked it up in the community,” he said.

The Department of Health and Human Services was notified on Thursday.

“I understand it was notified very late last night so some of those parents will only be finding out today the school is closed,” Professor Sutton said.

Close contacts of the student will be contacted and told to self-isolate for two weeks.

Despite recent clusters of the virus emerging in schools, Professor Sutton said the risk of transmission within schools remained “very low”.

But he urged people to minimise outings including shopping.

“If there are things you don’t have to do, don’t do them,” he said.

Professor Sutton said overall, the state was “heading in the right direction”.

“Community cases remain unusual — one or two a day. I’d like to see that go down to zero but if we can maintain that I think there is an opportunity for a further easing of restrictions in late June,” he said.

“But if things go in the wrong direction it all has to be reconsidered.”

Don't Miss it Coronavirus Explained: What happens next? – BBC News
Up Next Have you been tempted to dob in your neighbours over COVID-19 distancing restrictions? | The Drum