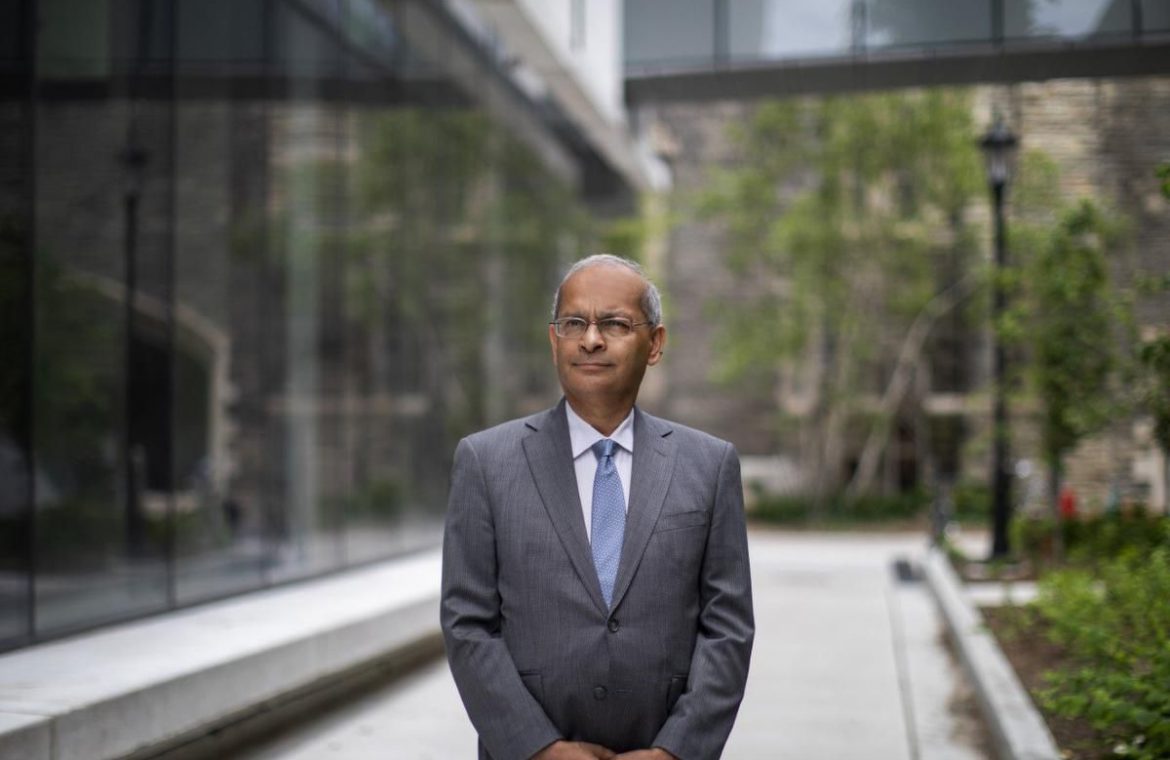 Many Toronto homes sport a sign in the window that reads: “You’re out there for us. We’re in here for you,” expressing the city’s support of health-care workers. Ontario went into lockdown in mid-March to make sure COVID-19 cases did not overwhelm hospitals.

But do we still need to be locked down? Provincial officials, who have extended Ontario’s emergency orders until June 30, would say yes. Some public health physicians, epidemiologists and economists would say no. Many worry the cure may now be worse than the disease.

“I don’t question the need for a lockdown in March,” said Dr. Martha Fulford, an infectious diseases specialist and chief of medicine for the McMaster University Medical Centre. “But now we have more information. And two months in, we are at a stage where the harm from lockdown is starting to look like it is going to be greater than the harm from COVID.

“And that is the conversation I think we should be having.”

Fulford is not talking about the fiscal harm to an economy in tatters. She’s referring to so-called “social determinants of health” or the health impact on millions of low- to middle-income Canadians — most of them women and newcomers — who have been thrown out of work due to the shutdown.

“But there doesn’t seem to be an exit strategy to deal with the worsening collateral damage of non-COVID mortality that we are seeing,” Fulford said. “And it’s not being tracked or clearly documented.”

Vivek Goel, a professor with the University of Toronto’s Dalla Lana School of Public Health and the university’s vice-president of research, innovation and strategic initiatives, is also concerned.

“Shutting down your economy is like cutting off both your feet — or maybe a better analogy would be your head — to try to save the rest of your body,” he said. “It was never meant to be a long-term strategy.”

Goel is leading a team of U of T researchers looking into the health consequences of a prolonged shutdown on various sectors of the economy and trying to quantify the non-COVID risk of mortality.

“So often the shutdown gets framed as a debate between health and the economy,” Goel said. “But the economy is health, too.”

For example, studies on past economic downturns have shown that unemployment increases a person’s risk of death by about 1.7 per cent, Goel said in an interview.

“If we compare the deaths in people age 25 to 60 from COVID versus deaths in coming years to unemployment, I certainly think we will have many times more” due to unemployment, he said. “Death is just the starkest thing. But there will be other health effects for those individuals as well.”

Goel’s team includes U of T colleagues Laura Rosella, Canada Research Chair in population health analytics, and economist Kevin Bryan, an assistant professor with the Rotman School of Management. Together, they are aiming to have their analysis ready by mid-July to help guide decision-makers on reopening the economy.

“I would say we need to carefully assess the kinds of (public health) consequences that we are talking about,” Goel said. “And then think about how we safely reopen sectors, starting with the ones that are most important to the economy.

“Can we get the right protections? Can we work with the unions? And can we reassure people that we will have them working in a safe way?” he said.

Outbreaks are inevitable as the province opens up, he acknowledged. Therefore, hospital capacity, testing and contact tracing will be crucial. Hospital admissions, rather than the number of new cases, should be the number to watch, Goel added.

About 97 per cent of COVID-19 deaths in Canada have occurred in people age 60 and older. Seventy-two per cent of deaths have been in people over age 80.

Meanwhile, about 2.2 million Ontario workers have been directly impacted by pandemic-related shutdowns through either job losses (1.1 million), temporary layoffs or sharply reduced hours (1.1 million), according to the Financial Accountability Office of Ontario (FAO).

Health Minister Christine Elliott on April 28 acknowledged that about 35 Ontarians had died awaiting treatment for heart disease, according to modelling, while hospitals cleared space to treat the novel coronavirus.

More than 52,000 hospital procedures had been cancelled or avoided as of April 22, and every week that the pandemic continues, up to 12,200 more procedures are delayed, according to the FAO.

Hospitals began a gradual return to elective surgeries in late May, but medical researchers estimate that it will take 11 months to clear the backlog.

A spokesperson for Elliott did not say how provincial officials are weighing the risk of COVID deaths against the risk of non-COVID deaths during the pandemic. But in a statement, Hayley Chazan said the government has introduced measures to help vulnerable populations, including funding to improve access to food banks and other supports.

“We understand how important it is for people to return to work, particularly for those whose lack of employment has resulted in mental health struggles and poverty,” she said in an email.

“As we gradually open our economy, continued protections for vulnerable populations must be in place, along with the continued practice of physical distancing, hand washing and respiratory hygiene, and significant mitigation plans to limit health risks,” Chazan added.

Fulford, who works mostly in pediatrics at McMaster, is particularly worried about the impact of the shutdown on children.

“This is not a pediatric disease anywhere in the world,” she said, noting that fewer than 100 people under age 20 in Canada have been hospitalized due to COVID-19 and none have died. (In Ontario, less than 4 per cent of people who have tested positive for the coronavirus are under age 20.)

By comparison, 1,372 people under age 20 were hospitalized for influenza in Canada last year and 10 died.

“So if we are looking for an exit strategy and trying to ameliorate harm, why have we not reopened playgrounds, school yards, camp, pools?” she asked. “Depriving a child of their education or socialization is going to do nothing to prevent COVID but do a lot to damage those children.”

As mental health experts sound the alarm, Fulford is already seeing the impact in her practice.

One of her patients, a former injection drug user who had been clean for six or seven years, has become so depressed by self-isolation that he has begun using drugs again, she said.

“These are the lives that are going to spiral downwards if this continues,” she said. “We didn’t get a tsunami of COVID, but as a result (of the lockdown), we are all bracing for a tsunami of mental health issues.”

Physicians in the United States are also speaking out. Last month, a letter to President Donald Trump signed by 600 American doctors called lockdowns a “mass casualty incident” with “exponentially growing negative health consequences” for millions who have not contracted COVID-19.

“The millions of casualties of a continued shutdown will be hiding in plain sight, but they will be called alcoholism, homelessness, suicide, heart attack, stroke or kidney failure,” said the May 19 letter. “In youths it will be called financial instability, unemployment, despair, drug addiction, unplanned pregnancies, poverty and abuse.”

“It is impossible to overstate the short-, medium- and long-term harm to people’s health with a continued shutdown,” said the letter by Dr. Simone Gold, an emergency medicine specialist in Los Angeles.

Gold, who has been criticized in American media as a Trump supporter, has said the letter was a grassroots effort by physicians and was not politically motivated.

“Losing a job is one of life’s most stressful events, and the effect on a person’s health is not lessened because it also has happened to 30 million (now 38 million) other people,” the letter noted. “Keeping schools and universities closed is incalculably detrimental for children, teenagers and young adults for decades to come.”

Richard Schabas, who was chief medical officer of health for Ontario between 1987 and 1997, said it is unfortunate the question of reopening the American economy in the wake of COVID-19 has become so politicized.

“It really has clouded the debate in the U.S., and I think it has impacted some of our thinking in Canada,” said Schabas, who was chief of staff at York Central Hospital during the 2003 SARS outbreak. He retired as medical officer of health for Hastings Prince Edward in 2016.

Politicians need to establish some “non-negotiables,” he said in an interview.

“They need to say things like: kids have to go to school; people have to go to work; there has to be elective medical care. Once we set those foundation stones that are necessary to protect our public health, then we can discuss what we can do to control COVID above and beyond that,” he said.

“Until now … it’s all been: What do we need to do to control COVID, and the rest can go to hell,” Schabas said. “And that’s a serious mistake from a public health perspective.

Canadians are “spooked” by COVID-19 deaths because they are broadcast daily in the absence of any context, Schabas said.

Almost 300,000 Canadians will die every year from cancer, heart disease, stroke, motor vehicle crashes, suicide and a myriad of other causes, he noted. Since mid-March, for every Canadian outside long-term care who has died of the novel coronavirus, 50 have died of something else, he added.

The great majority of people in Canada are at very little personal risk of death from COVID-19, Schabas said. For most people under age 60 and for older people without serious health conditions, the risk of death from the coronavirus is about the same as dying from influenza, he added.

“We are two populations: the frail elderly for whom COVID is a deadly disease and the great majority for whom it is not,” he said.

In an appearance before the House of Commons Health Committee on May 20, Schabas said the country is facing both a tragedy and a crisis.

The tragedy is COVID-19, a respiratory virus that has the potential to cause the deaths of tens of thousands of Canadians who are overwhelmingly old and infirm, he said.

The crisis is our attempts to control that virus that have the potential to cause “severe and lasting damage” to the country’s economy, education, social and cultural institutions and mental health that will have public health repercussions for decades, Schabas said.

“The tragedy is a natural disaster that saddens me and saddens us all,” he said. “The crisis is a self-inflicted wound that frankly terrifies me.

“It offends social justice because the burden of the crisis falls disproportionately on children, young families and blue-collar workers,” he said. “The more we focus exclusively on COVID, the greater the danger to our public health.”

Don't Miss it UK coronavirus hospital death toll rises to 31,469 as 133 more lives lost
Up Next U.S. coronavirus cases have been slowly ticking up since Memorial Day