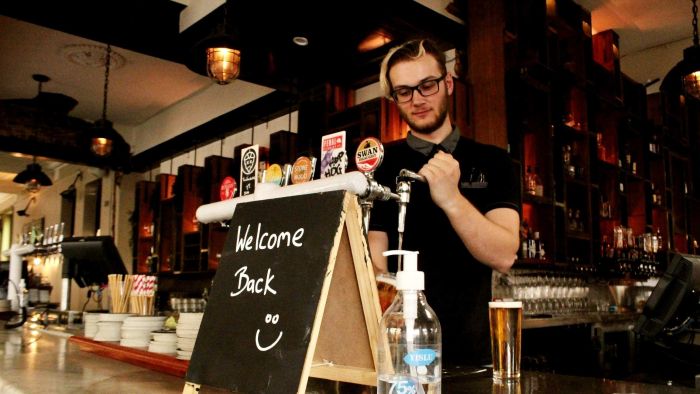 Western Australians have wasted no time in taking advantage of the easing of coronavirus restrictions, flocking to pubs, cafes and playgrounds across the state.

Key points:Pubs, playgrounds, beauty salons and cultural centres have reopened in WARottnest Island has officially welcomed visitors after being used for quarantineWA has recorded one new case of COVID-19 related to overseas travel

Under phase three of the State Government’s coronavirus roadmap, thousands of businesses have reopened their doors after almost three months of lockdown.

Australia’s biggest pub, The Camfield next to Perth Stadium, opened its doors at 11:00am.

Ebony Lane, sales and marketing manager of Camfield operator Three Pound Group, said the pub was expecting to see about 2,000 patrons across the course of the day.

“It’s just so nice to see people coming back,” she said.

“It’s been a difficult 12 weeks for us, but to see so many happy people coming in, and to see our staff back as well, is fantastic.”

Samantha Young’s eyebrows business in Burswood, in Perth’s east, has been closed for weeks.

The beautician said it was a relief to reopen the doors of her salon.

“I’m very excited to start my clients back up,” she said.

“Because I lost my job, but I also lost what I love to do.”

Ms Young described having to close the business during the pandemic shutdown as “a bit of a bummer”.

Beautician Samantha Young said she was relieved to reopen the doors of her eyebrows business in Burswood.(ABC News: David Weber)

“Things happen, and you have to kind of just follow the rules and it’s not the end of the world.

“A lot of clients did reach out to me and ask for appointments, but they understood obviously that I couldn’t do them,” Ms Young said.

“Everyone’s been super supportive: as soon as the announcement was made, my phone just blew up, the online bookings blew up, so, yeah, I’m fully booked for the next week and a half.”

Rottnest Island was used to quarantine some cruise ship passengers, including those from the Vasco da Gama, pictured returning to Fremantle.(ABC News: Andrew O’Connor)

“We’re in winter so it’s not the normal summer experience, but it’s a beautiful place to come to anyway.

“Booking numbers are up, but those are just accommodation bookings — a lot of visitors to the island are day-trippers normally, and I met people on the boat today who are just coming for a day trip.

“There’ll be thousands of West Australians coming to just do a trip for the day and that’s a great thing for business as well.”

Coronavirus update: Follow all the latest news in our daily wrap. Many pubs across Western Australia opened for the first time in months today.(ABC News: Gian De Poloni)

Mr Papalia said he believed that across the state, WA residents would help make up the shortfall in the lack of international visitors.

“West Australians are great travellers and in the normal course of events, thousands of Western Australians would be going out interstate or overseas.

Two cohorts of people went to Rottnest for isolation during the earlier phases of the coronavirus shutdown, and Mr Papalia paid tribute to the Rottnest Island Authority and the island’s workers for their contributions.

“Within two days, we went from a holiday island in peak season to being completely ready to take quarantine and that was an extraordinary effort by everybody,” he said.

“They had a little bit more notice to come back and everyone is ready.”

Groups of friends and families flocked to Kings Park to enjoy catching up outdoors once again.(ABC News: Gian De Poloni)

Construction on the island did not cease during the isolation period.

Mr Papalia said there was “something very special coming soon”, which the island had not seen before.

He said it was “pop-up” related.

The person, who is in hotel quarantine, had travelled overseas.

Altogether, 559 people have recovered from COVID-19 in WA.

Don't Miss it Exclusive: nearly 600 US health workers died of Covid-19 – and the toll is rising | US news
Up Next Bill Maher Says “Reckless Experiment” Of COVID-19 Shutdowns Worsened Impact Of George Floyd Protests On Many Cities – Deadline