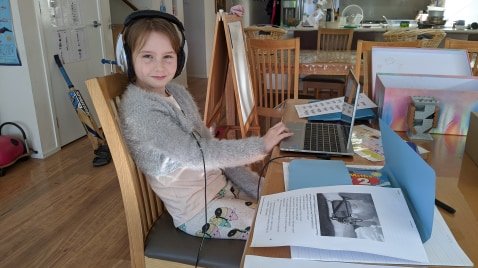 Have you ever thought about how you might explain life in Australia during the coronavirus pandemic to someone who hasn’t lived through it?

Over the past three months, people have been documenting the strange new sights they’ve encountered, stopping to snap a picture or record a video.

It will all become valuable fodder for the history books, which might just look back on the year 2020 as a lesson learned.

For many, the pandemic started with toilet paper.

A woman carries a bulk pack of toilet paper above her head as she walks down the street.(Supplied: Caroline Cox)

Supermarket shelves were stripped bare by people who feared there would be shortages and rushed to stock up.

This caused flow-on effects for the supply chain, left shelves empty for weeks, and made each roll a precious commodity not to be wasted.

But panic-buying behaviour soon extended to other items deemed essential for survival.

Pasta, flour, frozen food, hand soap and sanitiser were among the groceries in high demand.

With constantly empty shelves, and many shoppers going home empty handed, supermarkets had no choice but to enforce purchase limits.

Since the pandemic began, items such as face masks, gloves, hand soap and sanitiser have been heavily sought after.(Supplied: Michelle Emily)

According to ABS data, spending on medicinal and cleaning products increased by more than 50 per cent.

Retail turnover in March had its biggest monthly rise, surging 8.2 per cent according to preliminary figures.

Then physical distancing came in and businesses were forced to close.

Canberra Centre is empty of customers, with seating areas blocked off, after coronavirus restriction measures shut down many shops and food courts.(Supplied: Jeanette Torelli)

The Government banned non-essential indoor gatherings of more than 100 people, driving many away from normally crowded shopping centres.

Soon after, dining in at food courts was also banned, with only takeaway allowed.

Among the restrictions announced in March was the closure of shopping centre food court seating areas. Takeaway was still available.(Supplied: Cameron Stephen)

As businesses were forced to close, thousands of Australians were left out of work and, for many, forced to apply for Centrelink for the first time.

With nearly 1 million Australians out of work due to coronavirus, many have had their first experiences with Centrelink.(Supplied: James Withers)

Almost one million people have since applied to Centrelink for financial help as a result of the coronavirus pandemic.

Those who still had to go into their workplaces were deemed “essential workers”. They included supermarket workers, teachers, child care and aged care workers, and Centrelink staff.

A message of appreciation appears on the wall of a child care centre at the height of the coronavirus pandemic, saying “thank you to all healthcare + essential workers”.(Supplied: June Perkins)

Outings were limited to essential tasks only, such as going to work, exercise, or to buy food and other essential supplies.

Pubs, clubs, cafes and restaurants closed, and with orders to stay at home streets usually bustling with activity were left deserted.

The usually busy main street of Byron Bay was deserted in March as coronavirus restrictions forced businesses to close and people to stay home.(Supplied: Peter Byrne) A main street of Byron Bay resembled a ghost-town at night during the height of the coronavirus pandemic, when businesses were shuttered and people were urged to stay at home.(Supplied: Peter Byrne)

Confined to our neighbourhoods, socialising began to look a bit different.

Two men enjoy a physically-distanced drink together.(Supplied: Rowena Lamb) These women used the protection of a plastic sheet so they could hug.(Supplied: Alysia Stark)

Playgrounds were closed, much to the dismay of many families under stay-at-home orders during school holidays.

At the height of coronavirus restrictions, playgrounds became off limits and many were sealed off with caution tape.(Supplied: Lena Barridge) Swings and other playground and exercise equipment were off limit.(Supplied: Hannah Kohlenberg)

With some schools in NSW closing, and the Government recommending kids move to online learning for a period of time, children did their schoolwork from home.(Supplied: Ann Elizabeth Mather) Australian schools shifted to online learning at the height of the coronavirus pandemic, and many classrooms around the country were left empty.(Supplied: Kylie Ruth)

After weeks of online learning, some families got creative with their lessons.

After more than a month of shutdowns and physical distancing, Australians began to adapt to a new normal.

Baby Lillian and her family still celebrated her first birthday, with an appropriate theme.

The first case of coronavirus in Australia was detected on January 25, but it wasn’t until March that daily life really began to change.

“Less than 100 days ago… The number of coronavirus cases was increasing by more than 20 per cent per day.”

New daily cases reached an all-time high of 460 on March 28.

Australians, like many citizens in countries around the world, were abruptly forced to change the way they worked, shopped, travelled, socialised and exercised.

It was huge adjustment that took place in just a matter of weeks.

The four-square-metre rule was announced on March 20, and by the 25th, businesses were closed, activities were limited, international travel was at a standstill, and thousands of Australians were lining up at Centrelink. Border closures in some jurisdictions were yet to come.

Now, in June, just three months since things escalated, most states and territories are in stage two or three of their plans to return to normal.

The hoarding of toilet paper feels like a lifetime ago.

The National Museum of Australia wants your photos

Director of the National Museum of Australia Mathew Trinca says we’ll look back on pictures like these in years to come, trying to make sense of what we all lived through.

These photos will be a record of history.

“They are literally making this history record of what’s happening and how we’re hoping with it,” Dr Trinca said.

The museum has launched a social media project called Bridging the Distance, and is encouraging people to share their pictures, videos and other records on its Facebook page.

“We wanted to give people an opportunity to express in their own words what they were living through,” Dr Trinca said.

“We also thought it was a great way of tracking how people were dealing with this crisis and thinking about what we needed to bring into our collection.

“We’re not just thinking about the physical things in the collection, but we’re thinking about videos, photographs that people have shared, the sorts of things they’ve done online to connect with each other.

“I think that what we’ve learned in the museum, not just through this crisis, but even before, was that digital artefacts are just as important as physical artefacts, we’re understanding our experiences.”

Don't Miss it Covid-19 pandemic may be over in India around mid-September, claims mathematical model-based analysis | India News
Up Next coronavirus live updates Brazil – The New York Times