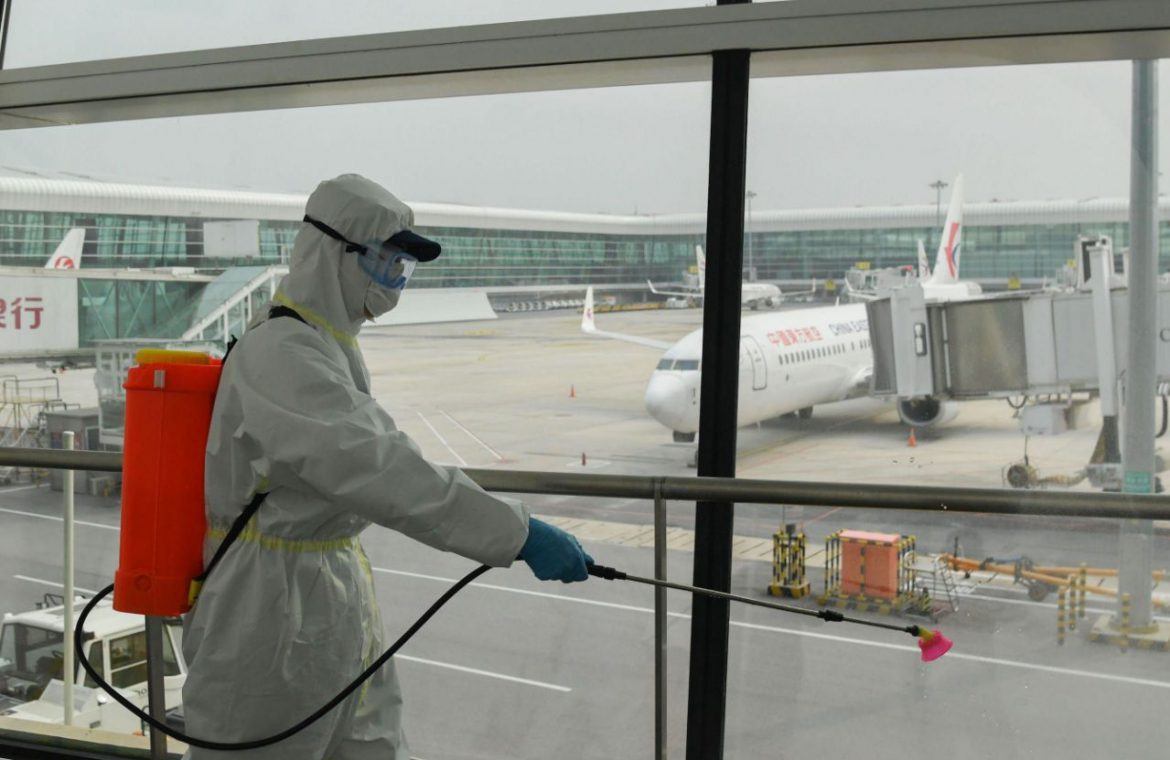 Delta Air Lines passenger planes are seen parked due to flight reductions made to slow the spread of coronavirus, at Birmingham-Shuttlesworth International Airport in Birmingham, Alabama, March 25, 2020.

The coronavirus may have reached the US by late December, mounting evidence suggests.

Nearly 1 million passengers flew from mainland China to the US from November 17 to February 1.

Because the US did not initially test widely for COVID-19, epidemiologists don’t know how far the virus spread in early 2020. Outbreaks in major cities quickly got out of hand.

That head start allowed the virus to take root long before the CDC could detect it.

On January 19, a 35-year-old man walked into an urgent care center in Snohomish County, Washington, with a cough and a fever. Four days earlier, he had returned from a trip to Wuhan, China.

A test revealed his diagnosis the next day: The US had its first case of COVID-19.

But he was almost certainly not the true first. Since then, a growing number of puzzle pieces have revealed a different picture of the beginning of the country’s outbreak — one that in retrospect seems so obvious it’s hard to imagine we ever believed otherwise. The coronavirus probably began spreading in the US in December, before we even knew it existed.

The Washington state patient was just one of nearly 1 million passengers who flew from mainland China to the US between November 17, 2019 — China’s earliest estimate for the new coronavirus’ emergence — and February 1, 2020. According to data provided to Business Insider by Cirium, a database and analytics company that tracks commercial air traffic, 3,357 flights occurred during that time. That’s a total of 994,281 seats.

Though some of those seats were probably empty, any of the travelers could have carried the virus.

“I think that’s highly plausible,” Dr. Lauren Ancel Meyers, an epidemiologist at the University of Texas at Austin, told Business Insider. “Well back into December, there was a period of time where there was a lot of international travel in and out of Wuhan.”

Indeed, two people who fell ill in Washington state in December later tested positive for COVID-19 antibodies, The Seattle Times reported. (Though it’s possible they had a more common illness at the time, then got an asymptomatic case of coronavirus later.)

“If it turns out that the virus was already in several cities in the United States by December, that is fairly consistent with everything we now understand about how this virus spreads,” Meyers added.

Anthony Fauci, director of National Institutes of Health Infectious Disease, speaks to reporters about the coronavirus at the White House in Washington, DC, January 31, 2020.

That flight data, of course, doesn’t account for people coming from Europe, though genetic studies suggest that’s how the pathogen got to the US East Coast. In France, a man arrived at a hospital outside Paris coughing up blood on December 27, four days before the WHO learned of China’s mysterious outbreak. His sample later tested positive for COVID-19.

Given the highly globalized nature of our world, any possibility that this was just a “Chinese virus,” as President Donald Trump has called it, now seems a foolish thought. That misconception allowed for early, undetected spread and contributed to a slow federal response that made the American outbreak into the disastrous, uncontrollable beast it has become.

You probably remember how this all began: In late December, dozens of severe and inexplicable pneumonia cases began cropping up in Wuhan, the sprawling capital of China’s Hubei province. The patients had fevers, labored breathing, and lesions on their lungs.

China reported the new affliction to the World Health Organization on January 3, after the organization requested information about rumors it had seen on an open-source platform, the Associated Press reported.

By then, the virus had likely been infecting humans for at least a month. Government data traces the country’s first COVID-19 case to November 17, according to the South China Morning Post.

A passenger wearing a mask waits to check in for a flight at Miami International Airport in Florida, March 21, 2020.

Indeed, the timeline of the US’s outbreak has required revisions.

Although the Centers for Disease Control and Prevention didn’t confirm community spread in California until February 27, a recent CDC report found that the virus actually began to spread in the country between January 18 and February 9. The US’s first coronavirus death, California autopsies have shown, happened weeks earlier than we originally thought. In Florida, at least 170 people who were later confirmed to have COVID-19 first reported their symptoms from December 31 to February 29, according to the Miami Herald.

On January 30, however, CDC director Robert Redfield told reporters that “the immediate risk to the American public is low.”

The early size of the US outbreak may never be clearA staff member blocks the view as a person is taken to an ambulance in a stretcher from a Washington state nursing facility, February 29, 2020.

Redfield recently suggested that the CDC’s new report shows why early widespread testing might have been fruitless.

“It really would be like looking for a needle in a haystack,” Redfield said in a briefing on May 29.

But other experts say that early testing could have prevented the shutdowns and waves of death that have plagued the country.

“On the contrary, I think [the CDC study] demonstrates the need for large scale-ups and improvements to public health infectious-disease surveillance,” Michael Mina, an infectious-disease expert at Harvard’s TH Chan School of Public Health, told NPR.

In South Korea, for example, rigorous contact tracing, efficient public information sharing, and widespread testing helped the country contain its outbreak within a few weeks. South Korea reported its first coronavirus case on January 20 — the same day as the US.

For many weeks, it had the highest testing-per-capita rate of any country in the world. South Korea never went into a full lockdown, and today its death rate remains low: around 2%.

Taiwan, primed by its experience with SARS in 2003, reacted immediately upon hearing of China’s outbreak. The state began to monitor incoming travelers from Wuhan for signs of respiratory illness on December 30, after Chinese ophthalmologist Li Wenliang warned fellow doctors about a possible outbreak resembling SARS.

In the following weeks, Taiwan quickly rolled out testing and public information campaigns.

A student gets his body temperature measured when returning for classes in Seoul, South Korea, on May 27, 2020.

US testing, meanwhile, lagged behind. Labs across the country didn’t have functioning test kits until late February, more than a month after the Washington state case was confirmed. By March 15, the country had tested just 39,332 people, according to the Covid Tracking Project. South Korea, meanwhile, had tested more than 268,000 by then.

“We lost several months’ time where we would have been able to isolate people and prevent the cases from accelerating as we did,” Jennifer Nuzzo, an epidemiologist at the John Hopkins Bloomberg School of Public Health, told the Washington Post.

South Korea had reported 11,668 confirmed cases and 273 deaths due to COVID-19 as of Friday. The US’s confirmed case total is ticking towards 2 million, and more than 109,000 people have died. To estimate America’s true case count, epidemiologists have said, we should multiply the official totals by 10.

‘It’s helpful to know what the true history of the virus has been’Workers collect samples from homeless people during a coronavirus testing operation, in downtown Miami, Florida, April 16, 2020.

A Business Insider poll of more than 1,000 Americans, conducted in late April, found that 33% of respondents thought they might have had the coronavirus. A few said they had symptoms as early as December 2019.

Most of those people probably did not have COVID-19 — “in the winter, there are a lot of different viruses that circulate in US populations,” Meyers said — but it’s very possible some did.

Gaining a better understanding of the true beginning of the US outbreak isn’t just a matter of confirming someone’s suspicions about their own illness, however, or correcting the historical record.

“If it turns out that it was spreading more extensively before we were aware of it, it might lead us to change our estimates for the proportion of cases that are asymptomatic or mild,” Meyers said. “It might also just sort of give people intuition for how long it takes between when a virus is first introduced into a city, and when it starts becoming apparent and really leading to a large number of cases in hospitals and deaths.”

Understanding how new viruses spread around the world world — and how quickly they can seep into new populations — could help scientists and policymakers learn from the mistakes of 2020 and prepare for the next pandemic.

A medical staff member tends to a patient suffering from COVID-19 in the intensive care unit at the Circolo hospital in Varese, Italy, April 9, 2020.

At this point in the current crisis, though, American epidemiologists have gotten used to working with limited data.

“It’s helpful to know what the true history of the virus has been in the United States,” Meyers said. “But I don’t think that will necessarily change our fundamental scientific understanding of the virus.”