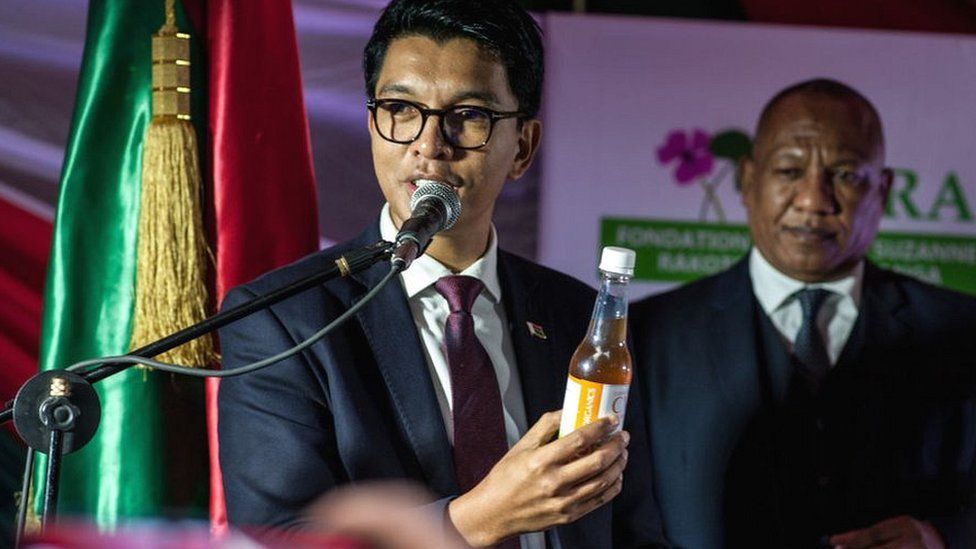 Students at a Madagascar school down Covid-Organics before classes begin

As coronavirus cases spread through African countries, misleading information continues to be shared on social media and online.

Here are some of the stories that have been widely shared recently.

1. The ‘plot’ to stop Africa developing its own curesScreen grab of article about Madagascar president

We start with a baseless conspiracy revolving around Madagascar’s President Andry Rajoelina, and the unproven herbal tonic, Covid-Organics, which he’s promoting to treat coronavirus.

Social media posts have been circulating that claim he’s being offered large amounts of money by the World Health Organization (WHO) to secretly poison the drink.

The baseless theory suggests that the WHO wants to prove that African countries can’t be self-reliant and find their own cure for Covid-19.

The claims were later published by two newspapers in Tanzania on 14 May. One of these reports alleges President Rajoelina had admitted – during an interview with France24 – that he’d been offered money.

The story has been picked up and widely shared on social media across Africa.

Mr Rajoelina was indeed interviewed by France24 on 11 May, but at no point does he say he’d been offered any money by the WHO.

The WHO has told the BBC the story is fake, and the Madagascar government has dismissed the allegations.

“Since the launch of the Covid-Organics remedy, many words have been falsely attributed to President Andry Rajoelina”, government spokesperson Lova Ranoramoro has said.

The herbal drink Covid-Organics continues to be produced in Madagascar and has been exported for use in other African countries, but there’s no evidence it works against the virus.

The WHO says it welcomes innovations based on traditional remedies but has also warned against untested treatments.

An online article claiming Tanzania’s Health Minister, Ummy Mwalimu, had tested positive for coronavirus, was shared on Twitter by, among others, a prominent journalist.

But this story is not true.

The basis of the story was a screenshot of a tweet, which the author claimed was posted by the minister.

The translation for the Swahili-language tweet reads: “It is unfortunate that I have tested positive for coronavirus. But I’ll continue to serve my nation remotely as if I was on the frontline until things get better”.

But the tweet doesn’t appear in the minister’s Twitter feed. The minister and the ministry of health have both dismissed the report as fake.

South Sudan President Salva Kiir and other senior officials have used so-called “protective” badges that claim to repel viruses, but which don’t work.

Photos posted on Facebook by the president’s press unit show him and other officials wearing what look very similar to two kinds of badges that can be bought online – called “Air Doctor” and “Virus Shut Out “.

But there’s no evidence that these can ward off viruses and bacteria.

When contacted by the BBC, a South Sudan government spokesperson said they’d been supplied to them by someone who said they were working on behalf of the Japanese government.

But they added they’d stopped wearing them “as they are not approved by the WHO”. The Japanese Embassy in South Sudan has denied any link to them.

Similar devices are being sold around the world and have been spotted being used by members of the Russian parliament.

The substance released by such cards or badges – the bleaching agent chlorine dioxide – is potentially harmful, and the subject of a warning from the US drug regulator, the FDA.

Misleading messages have been spreading on social media claiming that Tanzania’s President John Magufuli has banned the wearing of masks in public.

These posts claim the president had said wearing masks would spread fear, and send the wrong message to foreign visitors once international travel and tourism resume.

They use a screenshot of a tweet purportedly posted by the president, but it is fake.

There is also a fabricated press statement circulating, which is dated and signed from his hometown, Chato,

However, when we checked, we found that President Magufuli was in the city of Dodoma at that time.

The president’s spokesperson has called on people to disregard the claim.

The Tanzanian government encourages citizens to wear masks in public, and to practice social distancing.

However, the authorities are not releasing regular data on the coronavirus outbreak, and there are concerns that the president is downplaying the impact of the virus.

Send us your questions