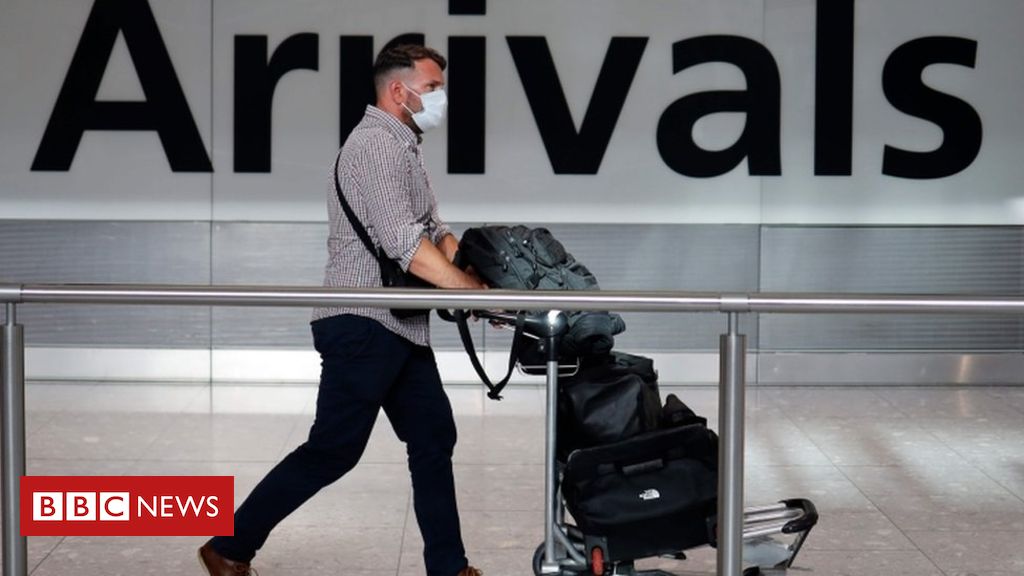 New rules requiring all people arriving in the UK to self-isolate for 14 days have come into effect.

Home Secretary Priti Patel said the laws are designed to protect public health from the threat of imported coronavirus cases.

But some industries have warned they will be severely impacted by the rules.

From Monday, passengers arriving by plane, ferry or train – including UK nationals – will be asked to provide an address where they will self-isolate.

Anyone arriving from the Republic of Ireland, the Channel Islands or the Isle of Man does not have to complete the form or enter quarantine.

All other travellers can be fined £100 for failing to fill in the “public health passenger locator” form or refused entry.

If they are unable to provide an address, the government will arrange accommodation at the traveller’s expense. There will also be checks to see whether the rules are being followed.

They must not go to work, school, or public areas, or have visitors – except for essential support.

Passengers could face a fine of £1,000 if they fail to self-isolate for the full 14 days.

However, some people are exempted from the mandatory isolation, including freight workers and medical professionals who are providing essential care.

Passengers in transit, who do not pass through border control, are also among the groups who are exempt.

The travel industry has been vocal in its criticism of the government’s quarantine rules, warning that the mandatory two-week isolation period will deter visitors and put jobs at risk.

The manufacturing industry has also highlighted that fewer flights will restrict imports and exports, which will have a knock-on effect for the freight industry, as well as hampering the recovery of some businesses.

British Airways, Easyjet and Ryanair have written to Procurator General Sir Jonathan Jones, the government’s most senior legal official – the first stage required when taking legal action against the government.

The airlines say they’re prepared to ask for a judicial review into the government’s travel quarantine rules.

And travel trade body Abta has called on the government to urgently create a roadmap for restarting international travel.

“We must restart international travel as soon as it is safe to do so, and businesses and customers would benefit from the government outlining when this is likely to happen,” said Abta’s chief executive, Mark Tanzer.

“There are many livelihoods at stake, and bookings will only start to pick-up in earnest when people and businesses have a better idea as to what the government’s plan is to open up the UK and access to international destinations.”

The UK’s biggest airport services company, Swissport, has also warned that the rules could deliver a “killer blow” to the tourism sector.

‘Another blow to our industry’

On 24 May, multiple industry leaders wrote to Prime Minister Boris Johnson asking that the government avoid taking a “blanket approach” to quarantining visitors to the UK.

Instead, they suggested that the UK agree so-called “air bridges” with countries that have low coronavirus rates, and enable visitors from these countries to enter the UK without having to quarantine for 14 days.

Following this, aviation, maritime and rail industry leaders were invited to a roundtable discussion with the home secretary and aviation minister Kelly Tolhurst on 4 June to discuss the new quarantine plans.

Media captionHome Secretary Priti Patel: ‘We are now more vulnerable to infections being brought in from abroad’

However, British Airways refused to attend the meeting, and aviation bosses told the BBC that they were not impressed by the content of the call.

The BBC understands that Priti Patel did not provide assurances that the quarantine would be reduced in any significant way soon by agreeing air bridges with other countries.

According to the BBC’s transport correspondent Tom Burridge, relations between the government and Britain’s aviation industry are now at “rock bottom”.

BA, already under huge financial strain due to the pandemic, has called the quarantine rules “another blow to our industry”.

The airline is proposing to make 12,000 staff redundant in order to stay afloat. Separately, Heathrow Airport’s chief executive has warned that about 25,000 jobs could be at risk at Heathrow Airport.

Government sources have told the BBC that the UK is hoping to secure air bridge agreements with certain countries, including many major European tourist destinations, such as Portugal, Spain and France, as well as Australia and Singapore.

But, for now, the government’s position is that the idea is only “under consideration”.