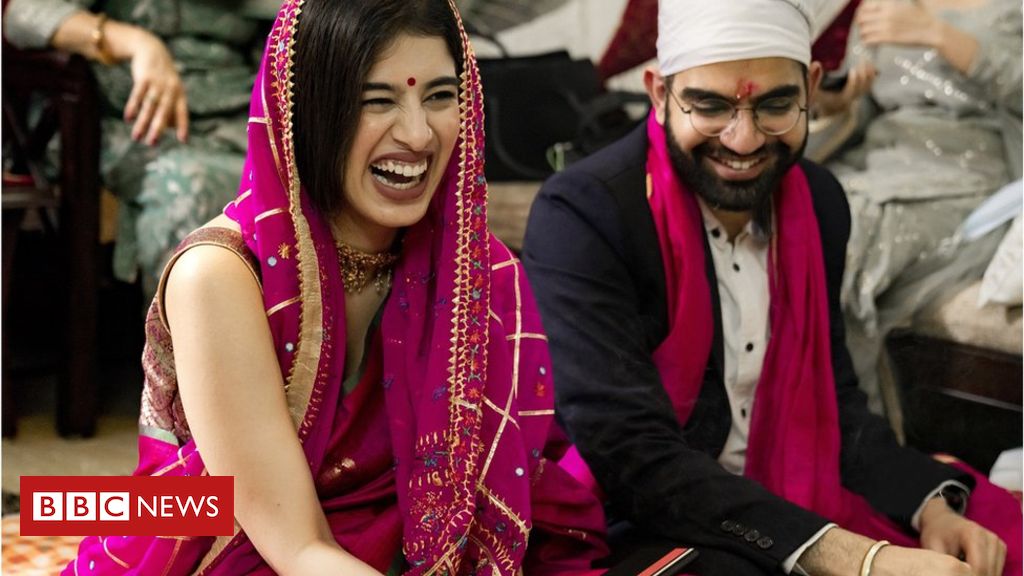 Marriage ceremonies across India have been put on hold due to the coronavirus lockdown. But some couples chose to swap their big fat weddings for small intimate affairs. So, could that be the new normal? The BBC’s Geeta Pandey in Delhi reports.

When they set a date for their wedding in early May, it was meant to be a lavish affair.

The celebrations began with an engagement party in March. Attended by 170 people, it was held on the lawns of a posh club in the city of Chandigarh. The venue was decorated with white and green flowers, and golden fairy lights twinkled everywhere.

“It was a typical Punjabi function,” says Chaitali, “there was lots of booze, lots of food, crazy loud music. And we danced the whole night. We stopped only when it was time for the DJ to go.”

For their wedding scheduled for 2 May, a sprawling resort was booked on the outskirts of the city for the three-day celebrations – there was meant to be a pre-wedding cocktail party, a music and dance event, and several other rituals.

The actual wedding, which involves the bride and the groom walking around a sacred fire seven times, was due to take place on top of a hill within the resort with the setting sun providing the perfect backdrop for photos.

Nitin and Chaitali’s engagement party was a big event

The guest list had 450 names, the 10-page food menu had four different styles of cuisines, and a DJ had been booked for the after party.

The bride’s baby pink silk skirt, blouse and scarf and the groom’s outfit were being custom made while orders for jewellery had been placed.

And then came the lockdown – on 24 March, India announced a complete shutdown of the country to halt the spread of the coronavirus.

The couple waited, hoping that the restrictions would be eased and they would be able to have their perfect wedding.

But with no sign of the lockdown being lifted, on 15 April, they decided to postpone the wedding to November.

But, as they say, destiny has its own plans.

Nitin and Chaitali’s wedding was attended by 16 people, including the priest

“At noon on 1 May, my dad got a call from a friend who said he could help arrange a curfew pass for us to travel from Chandigarh to Delhi if I still wanted to marry Chaitali on 2 May,” Nitin told me on the phone from Chandigarh.

It was a nail-biting few hours – after their initial request was turned down, the pass finally came through at 5:30pm.

“They said the wedding is on,” says Chaitali. “We had to then find a priest to conduct the ceremony. Our local priest first said yes, then he said no because his children were worried about him catching the virus. We finally found another priest at 7:30pm.”

At 9:30am the next day, Nitin reached Delhi with his parents and his brother. The priest arrived at 10:30 and the wedding began at 11.

“My living room became the wedding venue, I wore my mum’s magenta sari and my grandmother’s jewellery, the photographs were taken by Nitin’s brother, and we had a potluck lunch,” laughs Chaitali.

The ceremony was attended by 16 people, including the priest. A Zoom link was created to let friends and relatives watch from across India.

Although Nitin is not happy that his extended family of cousins, aunts and uncles missed his wedding and is planning a “grand reception” later in the year if the Covid-19 threat abates, Chaitali says “we thank our stars that it happened”.

Shanthu and Sukanya had planned a beach wedding

Three weeks later, similar sentiments were being expressed by newly-weds Sukanya Venkataraman and Shanthu Jacob Paul as they exchanged wedding rings in a dusty parking lot in the southern city of Bangalore.

Minutes earlier, they had been married at the Marriage Registrar’s office with the bride’s mother and the groom’s uncle and aunt as witnesses.

The paperwork was always a part of the plan – Sukanya is a Hindu and Shanthu a Christian and inter-religious marriages have to be registered – but it was not meant to be the only event.

“Shanthu wanted a beach wedding in Chennai where his parents live. There were plans for lavish receptions in Chennai (formerly Madras) and Bangalore. In our heads, we were expecting 200 guests,” Sukanya told me over the phone from Bangalore.

“I had always wanted to dress up as a bride, I wanted to wear a crimson silk sari, do up my hair and have elaborate henna designs on my hands.”

In the end, she did her own henna patterns and wore a white and gold sari Shanthu had gifted her two years back.

The groom’s uncle took the photographs, his aunt set up a Zoom link and did a running commentary as friends and relatives tuned in from Scotland, Norway, UAE and the US.

“I am pretty content. I like the idea of a much more personal, intimate wedding, but my husband has plenty of regrets, he’s got a laundry list,” says Sukanya, laughing.

Adds Shanthu, “It was an important day of our life. I had an idea what I wanted it to be. I wanted a month of music and dance rehearsals, a gala celebration, I wanted my family and friends to be there to witness our big day.”

He hasn’t given up on a big celebration though.

“Once it’s safe and the threat of coronavirus has receded, we will do receptions in Chennai and Bangalore. We’ll go to Paris for our honeymoon. Since we missed out on the beach wedding, we’ll go for a holiday to Mauritius or Maldives,” he says.

The May weddings have been exceptions, says Vandana Mohan, one of India’s best-known wedding planners who organised Bollywood superstars Deepika Padukone and Ranveer Singh’s wedding at Lake Como in Italy.

“I have advised all my clients to move their weddings scheduled for April and May to next year and they have all agreed to wait it out.

Ms Mohan says she’s been getting a lot of inquiries for later in the year, but she’s not encouraging couples to plan anything before mid-October because most people want to invite 250 to 300 people, but current rules allow only 50 people to attend a wedding.

“A wedding is a time of great celebration, a time of great joy, it’s the coming together not just of two people but also of families and communities,” she says, adding that she can’t “imagine a time in India when you’ll have a wedding and you won’t involve the community”.

Nupur Mehta, former editor of a bridal magazine, says “everyone is waiting for the Covid-19 vaccine”.

The wedding industry, she says, is one of the biggest in the country – more than 10 million marriages take place every year. Accounting and research firm KPMG estimates the wedding market to be more than $50bn.

The lockdown has hit the clothing industry and jewellery makers hard but, Ms Mehta says it will recover quickly because weddings are an integral part of Indian culture where – unlike in the West – living together and civil partnerships are rare.

“It’s one of the biggest events in most people’s lives. We wait all our lifetime for the wedding,” Ms Mehta says. “For some time people will have smaller weddings with fewer guests, but in the long run, the big fat wedding will be back in vogue.”

Don't Miss it The coronavirus came from China. But so might the vaccine | ABC News
Up Next Coronavirus Australia live updates: Mathias Cormann to face grilling over $60bn jobkeeper bungle – latest news | Australia news