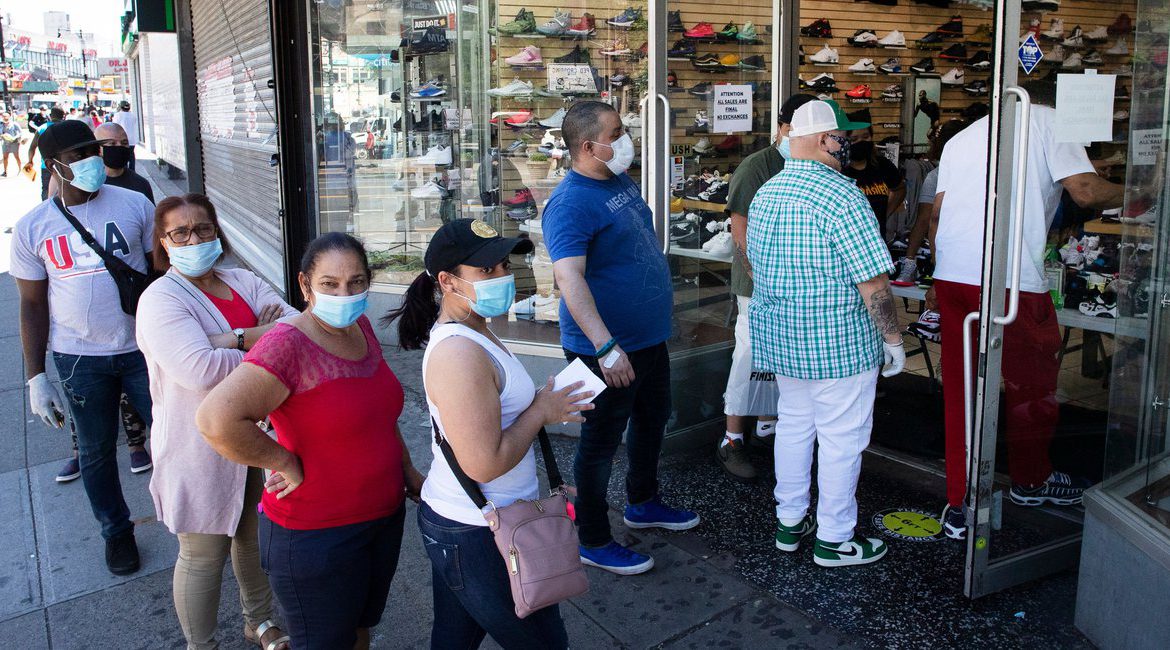 This is our daily update of breaking COVID-19 news for Tuesday, June 9th, 2020. Previous daily updates can be found here, and up-to-date statistics are here.

New York City is in Phase 1 of reopening now. Here’s a look at preparing for the spread of coronavirus is here, and if you have lingering questions about the virus, here is our regularly updated coronavirus FAQ. Here are some local and state hotlines for more information: NYC: 311; NY State Hotline: 888-364-3065; NJ State Hotline: 800-222-1222.

1 p.m. The fraction of New York City residents tested for coronavirus and found to be positive is now 1 percent, the lowest it has been since the coronavirus crisis began, Mayor Bill de Blasio said on Tuesday.

City and state health officials say they are carefully monitoring the rate of infection in New York City as economic activity gradually resumes, the first phase of which began on Monday.

Although the infection rate is based on the number of city residents getting tested, the city has significantly ramped up testing to nearly 34,000 people tested in one one day. Governor Andrew Cuomo on Monday said that going forward, the city would test a minimum of 35,000 people a day to ensure that health officials receive a reliable snapshot of the daily infection rate.

With the news on Tuesday, de Blasio hinted that New Yorkers may be able to swim at city beaches and pools before the summer is over.

“There may be a way to get back to pools,” he said. “It’s gonna take a little patience.”

He said the city could start thinking about relaxing restrictions around beaches. Asked about restaurants, which could reopen with outdoor dining in phase two, de Blasio said the city would be issuing what kind of rules to expect soon.

“We owe those restaurants guidance very quickly, this week or next week,” he said.

Cuomo, meanwhile, said on Tuesday that the state was placing more focus on infection rates over the daily death toll. It was the second consecutive day that the governor omitted the number of new deaths during his daily news briefing.

On Monday, the state recorded 40 new deaths from the prior day.

Cuomo said that by paying attention to the rate of infection the government can monitor whether they see any spikes in certain areas and pull back on reopening if necessary.

New York is one of several large states in America that is still not counting probable deaths, even though federal public health officials have been recommending states do so since April.

A review by the Washington Post found that New York was among 24 states, including California, Florida and North Carolina, that have not complied with the guidance issued by the Centers for Disease Control and Prevention. The lack of probable deaths is “one reason government officials and public health experts say the virus’s true toll is above the U.S. tally as of Sunday of about 1.9 million coronavirus cases and 109,000 deaths — benchmarks that shape policymaking and public opinion on the pandemic,” the Post story says.

According to the CDC, a probable death or case is defined as a person who meets certain clinical or laboratory criteria for the virus but does not have confirmed testing for COVID-19.

The omission of probable deaths by the state is only more unusual considering that New York City began counting probable deaths on April 14th, a move which added more than 3,700 deaths and pushed the total tally over 10,000.

The state and city have had differing death tallies, even without probable deaths, a sign perhaps of either a lag in reporting or differing definitions of what constitutes a confirmed COVID-19 death.

At news conferences, Governor Andrew Cuomo has been repeatedly asked why the state is not following CDC guidance in counting probable deaths. When it comes to nursing home fatalities, both New York and New Jersey have included probable deaths at nursing homes, but have not included them in their states’ overall death totals.